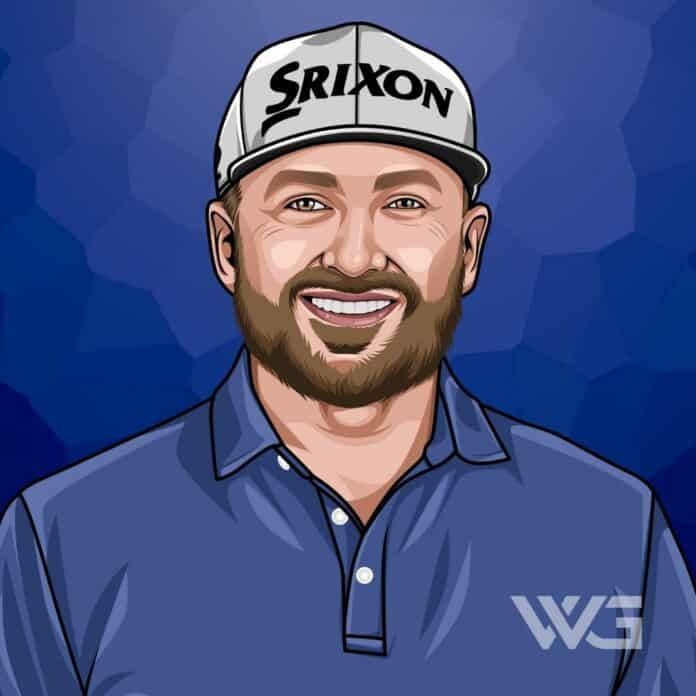 What is Graeme McDowell’s net worth?

Graeme McDowell is a professional golfer from Northern Ireland who has won multiple tour victories with the PGA and European Tours throughout his career.

He has also represented Ireland at the World Cup and has been featured in the top ten Official World Golf Rankings.

As of February 2023, Graeme McDowell’s net worth is estimated to be $40 Million.

Graeme McDowell was born 30 July, 1979, in Portrush, Northern Ireland, and was coached in golf by his uncle, Uei Loughery.

From the age of eight, he played with the Rathmore Golf Club, moving up to the senior cup with Rathmore when he was fourteen years old.

After attending Coleraine Academical Institution, he studied engineering at Queen’s University in Belfast before playing golf at the University of Alabama at Birmingham in 2002.

Following his success in golf college events, including winning the Haskins Award in 2002, McDowell turned professional the same year.

After he placed in the top 50 of the Official World Golf Rankings, McDowell was accepted as a full member of the PGA Tour, opening up many opportunities for the up-and-coming player.

He has competed against iconic golfers such as Bubba Wilson and partnered with Rory McIlroy in the 2010 Ryder Cup.

In 2013, he played against Tiger Woods in the Honda Classic tournament, winning the Volvo World Match Play Championship the same year.

He created controversy in 2014 after joining Donald Trump in calling for the Ryder Cup to be moved to Dubai and calling it the “spiritual headquarters of the European Tour.”

Between 2014 and 2018, McDowell consistently played during the PGA Tour seasons, earning large sums of money through various prizes.

In 2022, McDowell resigned from the PGA Tour and was named in the field for Centurion’s first LIV Golf Invitational Series event.

Graeme McDowell’s net worth growth has seen him compared to some of the richest athletes in the world, augmented through his investments and real estate deals.

His consistent wins in the PGA Tour and European Tour circuits have seen his net worth steadily climb over the course of his professional career.

With his transition to LIV Gold Invitational Series, his wealth and assets will continue to increase in the future.

In 2012, Graeme McDowell began dating his interior designer Kristin Stape, with the couple marrying the following year and having their first child in 2014.

A huge supporter of Manchester United, one of the richest soccer teams in the world, he’s even skipped golfing contests to watch their UEFA Champions League game against Chelsea.

McDowell has a solid social media presence and an official Instagram account, which he uses to keep his fans in the loop about his upcoming matches.

Graeme McDowell’s long career as a professional golfer has seen him compete against the world’s leading golfers in tournaments around the globe.

He has won many tours with the PGA and elsewhere, following a successful amateur career in Northern Ireland.

Here are some of the notable awards and honors from Graeme McDowell’s career:

Graeme McDowell continues to play golf in many tournaments, so we can anticipate future awards and trophies in the following years.

How Does Graeme McDowell Spend His Money?

With tens of millions of dollars to his name, Graeme McDowell’s lifestyle matches the richest golfers in the world, including expensive properties in America.

He sold his modest apartment in Ireland in 2010 after winning the U.S. Open at pebble beach, moving to a large property in Florida with his wife and child.

His investments also include a restaurant called the Nona Blue, which he opened in the Lake Nona Golf & Country Club neighborhood.

McDowell has enjoyed many successes from his early years as an amateur golfer in college to his iconic victory in the U.S. Open and in many international Tours.

He’s become a golfing legend in his home country, receiving many honors over the years and helping to popularize golf for the next generation.

Here are some of the best highlights of Graeme McDowell’s career:

His impressive career shows no signs of slowing down, so golfing fans can expect more high points as he continues to excel on the course.

Graeme McDowell has been interviewed on many occasions throughout his career, sharing his thoughts on the game and his success.

He’s discussed his hopes and frustrations and how winning the 2010 U.S. Open at pebble beach changed his life.

Here are our favorite quotes from Graeme McDowell:

Now that you know all about Graeme McDowell’s net worth, we’ll explore some of the valuable life lessons we can take from his experiences.

His continuing success points to a dedication to honing his skills that can be applied to all our endeavors and creative goals.

Here are some of the best success lessons to learn from Graeme McDowell:

1. Take Advantage Of The Skills Of Your Family Members

From a young age, Graeme McDowell could hone his golf-playing abilities thanks to coaching from his uncle.

If you have a family member with a particular talent, don’t be afraid to ask for their help.

2. Use The Media To Your Advantage

When photographer Kevin Abosch wanted to use McDowell as part of his “Face of Ireland” project, he leaped at the opportunity to participate.

Using the media to your advantage to increase your public profile is a must for ongoing success.

3. Romance Can Be Found In Unlikely Places

McDowell’s plans to revamp his bachelor pad in Northern Ireland led to his chance meeting with his wife, interior designer Kristin Stape.

That wraps up this guide to Graeme Mcdowell’s net worth, from his early successful amateur career to his first major championship win at the 2010 U.S. Open.

With many victories at both the PGA Tour and European Tour, he’s established a reputation as a consistent performer on the pitch.

Since he continues to play golf, his net worth will increase over time, so be sure to check back on this article to get the most up-to-date information available.

As of February 2023, Graeme McDowell’s net worth is estimated to be $40 Million.

What do you think about Graeme McDowell’s net worth? Leave a comment below.