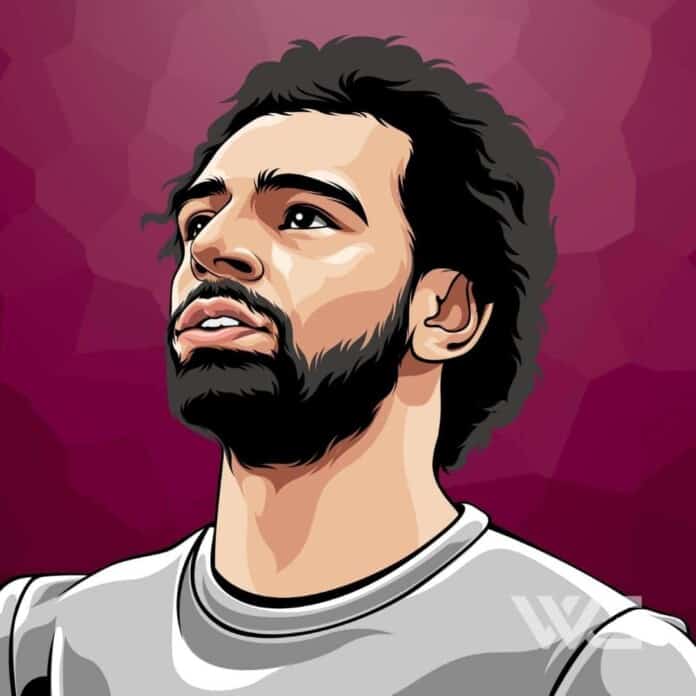 What is Mohamed Salah’s net worth?

Mohamed Salah is an Egyptian professional footballer who plays as a forward for Premier League club Liverpool and the Egypt national team. Salah is considered to be one of the best players in the world. He is best known for his finishing, dribbling, and speed.

As of January 2023, Mohamed Salah’s net worth is approximately $90 Million.

Mohamed Salah was born on the 15th of June, 1992, in Nagrig, Gharbia. Mohamed tried finding the right balance between his academics and football but he could never improve his academics.

When he wasn’t playing football, he was watching football on television. Among his early idols were some Arabic players. His parents wanted a conventional career for him, but unaffected by his parents’ wishes.

In April 2012, signed a four-year contract with Basel. He made his ‘UEFA Championship League’ debut in the same year and in the ‘Europa League’, and scored on many crucial occasions to help his team reach the semi-finals, where they eventually lost.

He played an important role in Basel’s 2012-13 ‘Swiss Super League Championship’ victory, and a great performance in the Swiss Cup, where they finished runners up.

In 2015, he transferred to ‘Roma’ on loan. In September 2015, ‘Fiorentina,’ miffed with Chelsea’s breach of contract, filed a case, but it was later settled and Salah stayed with ‘Roma.’

Salah agreed to a long-term contract with Liverpool for 50 million Pound in 2017, which was a club record. He, thus, became Liverpool’s first-ever Egyptian player and scored in his debut match against ‘Watford.’ He was named as ‘Player of the Month’ for August by Liverpool fans.

In the 2017 ‘Africa Cup of Nations,’ he turned out as one of the leading goal scorers and helped his team to the finals. He also earned a place in ‘CAF Team of the Tournament.’

Here are some of the best highlights of Mohamed Salah’s career:

“Football for me was nothing but a game. Maybe it was not even a hobby. Maybe it was a distraction – an impossible dream.” – Mohamed Salah

“I think it was a good first season with Roma but we did not win any titles, and this is a problem.” – Mohamed Salah

I want to improve my shooting from outside the box, use my right foot more, use my head more and play with more speed.” – Mohamed Salah

“My first successes were at the same time as my family having to make sacrifices. It was a very difficult time for me. I used to leave the house early in the morning and I used to come back home very late. I was forced to take five buses to reach my club.” – Mohamed Salah

Now that you know all about Mohamed Salah’s net worth, and how he achieved success; let’s take a look at some of the best lessons we can learn from him:

1. You Will Never Win if You Don’t Start

Starting is always the hardest step in your journey to achieving your goals.

Fear of failure, insecurities, and many more reasons are keeping you stuck at square no. zero, but if you don’t start you will never explore your potential for success.

You fear you are not creative enough, or the right person for the job, well, do it anyway! Dream and trust in it. There is always room for improvement if you believe in yourself.

2. Skill Will Only Get You This Far

You are one of the lucky ones who are talented or skilled in your chosen field, well good for you.

Mere skill will only get you recognized for a short time, but perseverance and hard work will write your name in history!

People will forever look up for legends and will always recognize them even when they are no longer in business. Working hard to evolve your skills, weaknesses and personal growth is the secret recipe to achieving greatness.

You are who you are. Let’s start embracing your true self instead of hiding it under the covers. This should kick-start the beginning of your self-discovery process and ignite more ideas to start a journey of continuous improvements.

How much is Mohamed Salah worth?

Mohamed Salah’s net worth is estimated to be $90 Million.

How old is Mohamed Salah?

How tall is Mohamed Salah?

Mohamed Salah is a gifted footballer since his childhood. He started his career with the youth team of the Egyptian club ‘El Mokawloon.’ In 2017, he was named the ‘African Footballer of the Year’ by BBC and CAF.

As of January 2023, Mohamed Salah’s net worth is estimated to be roughly $90 Million.

What do you think about Mohamed Salah’s net worth? Leave a comment below.