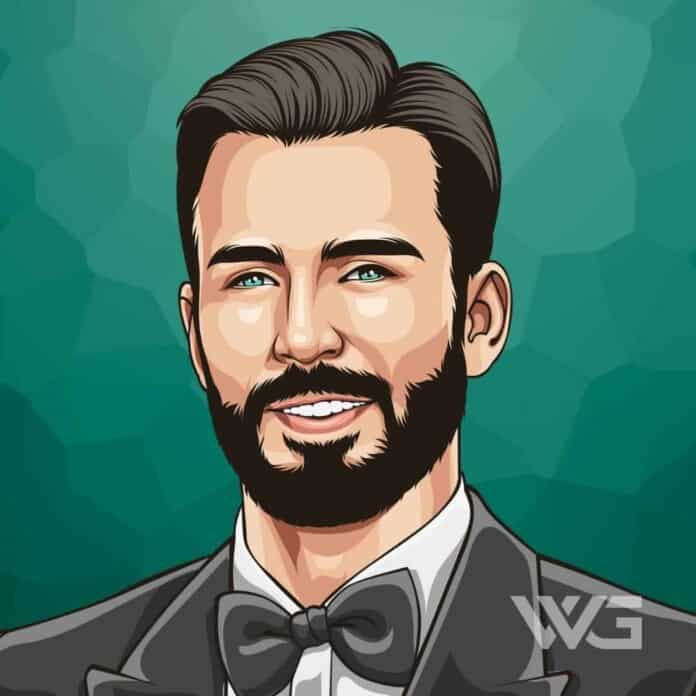 What is Chris Evans’ net worth?

As of December 2022, Chris Evans’ net worth is approximately $80 Million.

Christopher “Chris” Robert Evans is an American actor from Boston.

Evans is best known for his superhero roles as the Marvel Comics characters Captain America in the Marvel Cinematic Universe and Human Torch in ‘Fantastic Four’ and its 2007 sequel.

Christopher “Chris” Robert Evans was born on the 13th of June, 1981, in Boston, Massachusetts. Evans is the son of Lisa and Robert Evans. He has two sisters, Carly and Shanna, and a brother, Scott. He is of mixed ancestry.

Evans attended the Lincoln-Sudbury Regional High School where he often participated in school stage productions. His portrayal of the character Leontes in ‘The Winter’s Tale’ earned him much praise from his drama teacher.

Evans began his career as a model for “Tyler” in Hasbro’s board game ‘Mystery Date’ in 1999. Though it was a small beginning, his friends encouraged him and prodded him to start auditioning for television roles and films.

Initially, he played small roles in low-budget movies like ‘Cherry Falls’ (2000) and ‘The Newcomers’ (2000) before getting more substantial roles. In 2001, he bagged his first major movie, ‘Not Another Teen Movie,’ a teen comedy film directed by Joel Gallen.

In 2015, he reprised the role of Captain America in two movies, ‘Avengers: Age of Ultron’ and ‘Ant-Man’, appearing in the latter in an uncredited cameo.

In 2016, he once again played the same role in ‘Captain America: Civil War.’ As of this year, he starred as Captain America in ‘The Avengers: The Endgame’.

Here are some of the best highlights of Chris Evans’ career:

“My mom is Episcopalian; my dad is ancestrally Jewish but personally atheist. After their divorce, however, my dad married a Jewish spiritual director, and I became fascinated by the traditions she brought into our lives.” – Chris Evans

“I wish I’d had more fun in college. I spent a lot of time in my dorm room, reading or writing while listening to my Sarah McLachlan Pandora station.” – Chris Evans

“The point is that when I see a sunset or a waterfall or something, for a split second it’s so great, because for a little bit I’m out of my brain, and it’s got nothing to do with me. I’m not trying to figure it out, you know what I mean? And I wonder if I can somehow find a way to maintain that mind stillness.” – Chris Evans

“Nothing is worse than a beautiful girl fishing for compliments by saying how gross she is. On the flip side, I find genuine humility and modesty attractive.” – Chris Evans

“I really try to spend as little time as possible on grooming. Think if you have a good moisturizer and a solid razor to clean up the beard, you’re golden.” – Chris Evans

“I think diamonds represent luxury, indulgence, and class. So any time you can incorporate a gift that is synonymous with all those attributes, you know the other person will love it.” – Chris Evans

Now that you know all about Chris Evans net worth, and how he achieved success; let’s take a look at some of the greatest lessons we can learn from him:

1. The Biggest Fear We Face: Fear of the Unknown.

Not knowing is one of the worst things a person can go through. As Captain states, knowing the enemy is important. The idea that S.H.I.E.L.D was hijacked and knowledge and information were kept from the public about the public, in Captain America’s eyes were worse than them knowing the truth.

2. “This isn’t freedom. This is fear” – Captain America

S.H.I.E.L.D in a sense wanted to protect society by the process of ‘the greatest good for the greatest number’, sacrifice your freedom and you’ll be safe. Captain points out “this isn’t freedom, this is fear”.

He then talks about freedom meaning trusting people and taking the risk. Telling them He chose to sacrifice His life for freedom because it is valuable to him.

3. You Have to Let the Past Go, to Get Hold of the Future

He sees his past – and has to choose to face where he was and his past and not be afraid of it. He is a different man, with the same morals but he has to face the pain of all the rejection and all the hurt he felt while at that training ground.

How much is Chris Evans worth?

Chris Evans’ net worth is estimated to be $80 Million.

How old is Chris Evans?

How tall is Chris Evans?

Chris Evans is best known for portraying superhero roles, such as Captain America in the ‘Marvel Cinematic Universe’ (MCU) and the Human Torch in the ‘Fantastic Four’ film franchise.

Although he has also tried his hands at playing dramatic and romantic roles, it is his superhero roles that earned him the most acclaim.

What do you think about Chris Evans’ net worth? Leave a comment below.