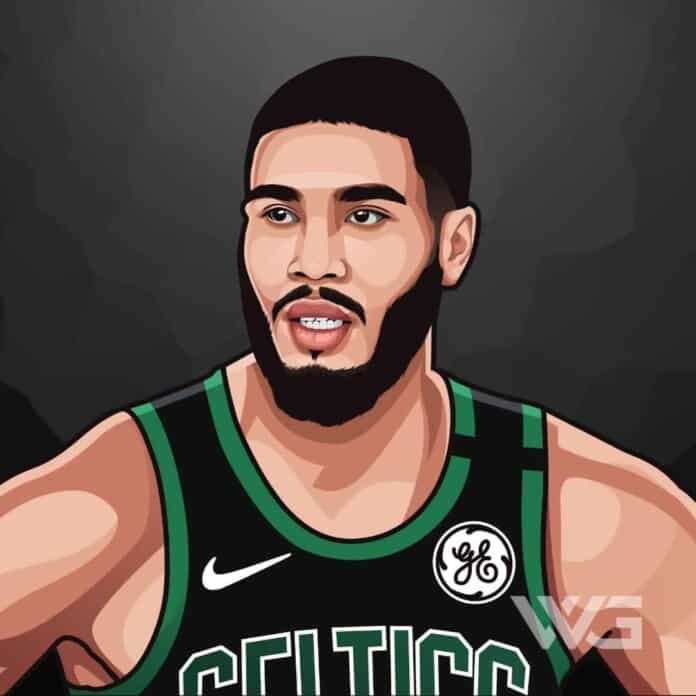 What is Jayson Tatum’s net worth?

Jayson Tatum is an American professional basketball player for the Boston Celtics of the NBA.

He attended hometown Chaminade College Preparatory School, where he was rated a five-star recruit and regarded as one of the top players in the Class of 2016 by recruiting services.

He was conceived when both his parents were 19 years old and were not married to each other. When he was born, his mother decided to raise him as a single mother.

His father, Justin, was a basketball player who played for ‘St. Louis University.’ He later took up a job as a gym teacher and a basketball coach at the ‘Christian Brothers College High School’ in St. Louis.

The ‘Boston Celtics’ general manager, Danny Ainge, made a controversial move to acquire Jayson, who was picked as number 3 overall in June 2017. His first tournament with the ‘Celtics’ was the 2017 ‘NBA Summer League’ event, which took place in Utah.

The ‘Celtics’ entered the 2018 ‘NBA Playoffs.’ During the tournament, Jayson once again played the key role in many of his team’s victories. In a second-round game against the ‘Philadelphia 76ers,’ he scored 28 points, which was the all-time highest score in a playoff by a rookie playing for the ‘Celtics.’

He also became the youngest player to score more than 20 points in four consecutive ‘NBA Playoff’ games. He then scored his fifth 20-pointer in the same tournament, claiming another record.

In 2018, he was named to the ‘NBA All-Rookie First Team.’ He has also represented his national team in many overseas tournaments.

Here are some of the best highlights of Jayson Tatum’s career:

“I was fortunate enough to make it to where I want to be. There could be other kids as talented or more talented than me in whatever they want to be but don’t have the resources to pursue their dream. Maybe they have to get a job instead to help their mom with the bills.” – Jayson Tatum

“One day I’d have 20 points, the next day two points. I was dribbling the ball off my leg. I couldn’t understand why. The media started asking me, ‘Is this because you are a new dad?’ I didn’t want to blame my son. There are plenty of people in much worse situations, and they make it work. I have to do that, too.” – Jayson Tatum

“I grew up watching LeBron and asking him to follow me back on Twitter, going to his camps. So just to be able to compete against a player like him and be a few shots away from beating him and his team to go to a championship is something I will always remember.” – Jayson Tatum

“Guys are going to be physical, especially with me being the young guy. That tends to happen a lot. It’s just guys trying to be stronger and bigger than me, so they’re just trying to be more physical.” – Jayson Tatum

Now that you know all about Jayson Tatum’s net worth, and how he achieved success; let’s take a look at some of the lessons we can learn from him:

Start by doing what’s necessary, then what’s possible; and suddenly you are doing the impossible.

People rarely succeed unless they have fun in what they are doing.

To think too long about doing a thing often becomes its undoing.

How much is Jayson Tatum worth?

Jayson Tatum’s net worth is estimated to be $25 Million.

How old is Jayson Tatum?

How tall is Jayson Tatum?

Jayson Tatum is an American basketball player who was trained in basketball from an early age.

His exceptional performance had him getting picked up by ‘Boston Celtics’ in the 2017 ‘NBA Draft.’

In May 2018, he was named to the ‘NBA All-Rookie First Team,’ following many extraordinary performances. He is considered to be one of the best NBA players in the league.

What do you think about Jayson Tatum’s net worth? Leave a comment below.