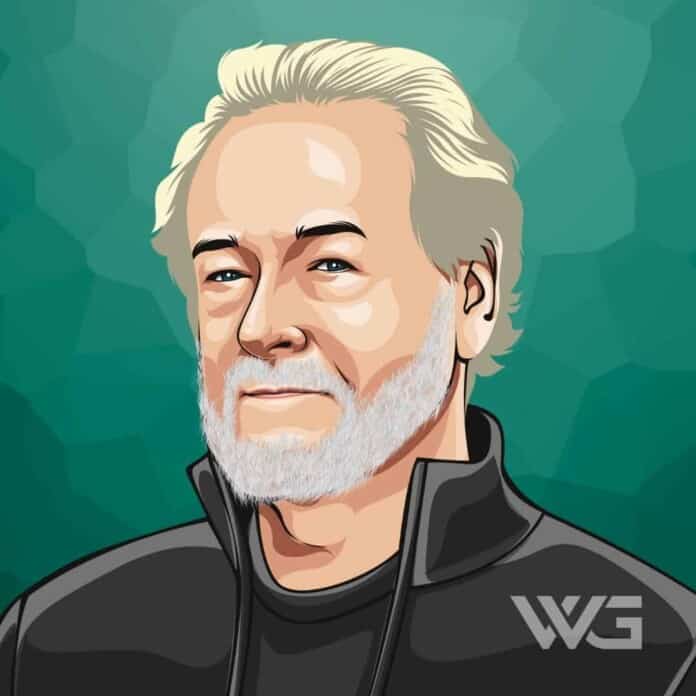 What is Ridley Scott’s net worth?

Sir Ridley Scott is an English filmmaker from County Durham, England. Scott is best known for being behind the movies ‘Alien, ‘ Blade Runner’, ‘Thelma & Louise’, ‘Gladiator’, and ‘The Martian’.

Ridley Scott was born on the 30th of November, 1937, in County Durham, England. As he was born immediately before the beginning of the Second World War, his father mostly remained absent from his life.

He had two siblings: his elder and younger brothers. His elder brother decided to serve the ‘British Merchant Navy’ and left home while Ridley was still a toddler.

In 1977, Ridley Scott stirred the international film festival circuit with his debut feature film, ‘The Duellists.’ It was a historical war film. Ridley spent less than US$ 900,000 to make the film.

Ridley accepted the job of directing ‘Aliens’ in 1979. It was a science-fiction horror film, which turned out to be a huge international success and brought Ridley immense respect and appreciation.

Ridley took another break from directing and concentrated on his career as a producer, with the series ‘The Hunger,’ loosely based on the 1983 film directed by his younger brother, Tony Scott.

The 2007 film ‘American Gangster’ was based on the real-life tale of Frank Lucas, a popular drug kingpin. The film opened to rave reviews, with Ridley receiving a ‘Best Director’ nomination at the ‘Golden Globe Awards.’

In 2017, his next film, ‘Alien: Covenant,’ was released. It was a sequel to ‘Prometheus.’ Critics were pleased with the film and called it his “return to form.”

He then served as an executive producer of the sequel to his 1982 cult classic ‘Blade Runner,’ titled ‘Blade Runner 2049.’

Here are some of the best highlights of Ridley Scott’s career:

“I always say to people when I’m trying to get something going, bringing on other producers or other directors, “You can think of 95 reasons why not to make a movie. You’ve got to address why you want to make the movie and get it done. Just do it.” I tend to live by that rule.” – Ridley Scott

“It goes back a long way. I wanted to make Tristan + Isolde as my second movie. My first movie was The Duellists. And I was standing in a very romantic part of France looking around me thinking, “My God, this would be perfect for Tristan,” and to cut a long story short it never happened because I did Alien instead.” – Ridley Scott

“I went to Art College and during the summer I made a movie with my brother. I got hold of a little camera, wrote a script and dragged my brother, Tony, out of bed to help me (which he did not like), so that we could shoot a film every day for six weeks. It was made for £65 and it was called Boy On A Bicycle.” – Ridley Scott

Now that you know all about Ridley Scott’s net worth, and how he achieved success; let’s take a look at some of the lessons we can learn from him:

1. Don’t Assume That “White” is the Default Setting

This applies to all genres, but for the sake of this discussion, let’s start with “sword and sandal movies.”

Besides similar geographic regions and elaborate battle sequences, the main hallmark of these films has always been their casting of white actors in roles which usually warrant a different ethnicity and skin color.

The history of Native American representation in cinema is notoriously rocky.

So when it was announced that Rooney Mara would play Tiger Lily in Warner Brothers’ upcoming Pan, people were understandably upset.

The Internet responded in no time, and soon a petition was going around denouncing the decision. It also didn’t help that Disney received similar criticism last year when they cast Johnny Depp as Tonto in The Lone Ranger.

Director Joe Wright’s camp, meanwhile, attempted to ease tensions on the subject: “In an effort to appeal to international audiences, Wright plans to create a diverse Neverland and challenge audiences’ preconceived notions of the magical world first depicted in J.M. Barrie’s classic tale.”

3. Don’t Miss the Forest For the Trees

Perhaps the biggest issue of all with Exodus is that it doesn’t appear there were any Egyptian or Jewish actors even in contention for the bigger roles in the film.

At the very least, several Middle Eastern actors of various backgrounds could’ve been considered. But instead, we got two white leads, in a mostly white cast, taking part in a distinctly non-white story.

How much is Ridley Scott worth?

Ridley Scott’s net worth is estimated to be $400 Million.

How old is Ridley Scott?

How tall is Ridley Scott?

Ridley Scott is an English film producer and director, regarded as one of the biggest names in Hollywood.

He has earned multiple nominations for prestigious awards such as the ‘Emmy Award,’ the ‘Academy Award,’ and the ‘Golden Globe Award.’ He has won two ‘Emmies’ too.

What do you think about Ridley Scott’s net worth? Leave a comment below.