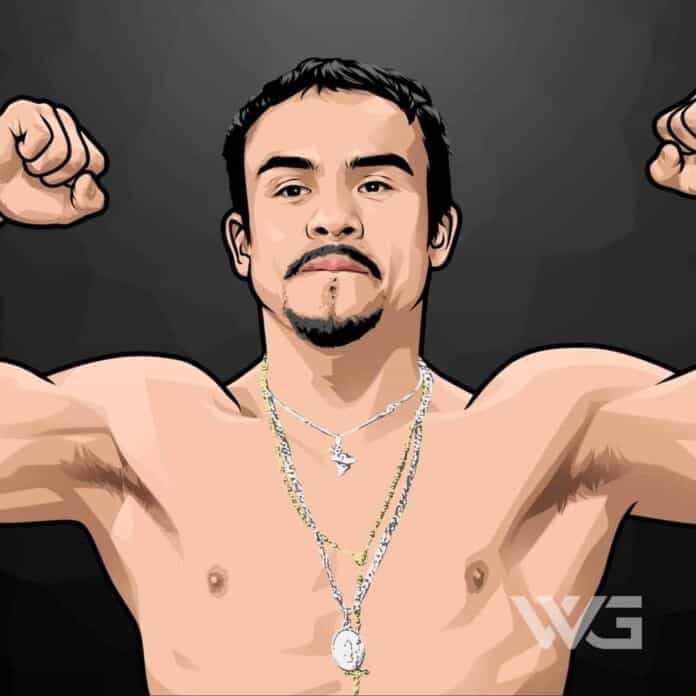 What is Juan Manuel Marquez’s net worth?

Marquez competed from 1993 to 2014. He is the third Mexican boxer to become a world champion in four weight classes.

Juan Manuel Marquez Mendez was born on the 23rd of August, 1973, in Mexico City.

Mendez grew up in a poor area of Iztacalco, and many of his friends were hanging out on the streets. He studied and became an accountant and worked for many government agencies.

Mendez then started to practice boxing. He was inspired by his father’s training. He stated that he likes to “eat well” and does not follow any kind of diet. His brother, Rafael Márquez, is a former world champion.

In a long career that spanned over 20 years, he was known for being a fast and technical boxer who was exceptionally skilled at combinations and counterpunches yet also willing to engage in slugfests with opponents. He was also credited for his toughness and never lost a fight by stoppage.

One of his most notable bouts includes his four-fight saga with Manny Pacquiao and his fight against fellow Mexican Marco Antonio Barrera. Márquez is considered to be one of the greatest boxers of all time.

In 1993, he made his professional boxing debut. In 1997, Marquez won the WBO NABO Featherweight title, which he defended seven times. During this time, he was referred to as the “best fighter without a world title.

In 2007, he announced that he would defend his title in a rematch with Pacquiao. The following year, he lost his Super Featherweight title to Pacquiao via split decision.

Here are some of the best highlights of Juan Manuel Marquez’s career:

“Boxing is my passion. It is my sport, my favorite sport. When I see the fights on TV, I said I go back to fight. I come back to fight and I want to return to the fight.” – Juan Manuel Marquez

“I had my first chance when I was 26 but, the judges denied me the opportunity. Four years later, I won my first world championship, defeating ‘Mantecas’ Medina. That was such a great moment.” – Juan Manuel Marquez

“My career was not defined by Pacquiao. I didn’t need to beat him. I don’t want to be too arrogant but nobody gave me a boxing lesson. Winning by knockout is important, but for me, it was better to dominate them, make them suffer inside the ring.” – Juan Manuel Marquez

“The fight did not happen because you have to remember that at the time he was a fighter being supported by the promoter Zanfer and by a sanctioning body WBC. What they didn’t want is for their fighter to lose and not continue generating business for them, that’s what happened.” – Juan Manuel Marquez

“The fight never happened, the right thing was never done, I was in the best position to fight for the championship, I was ranked number one, we even went to the house of the president of the World Boxing Council to request that opportunity; if I remember correctly.” – Juan Manuel Marquez

Now that you know all about Juan Manuel Marquez’s net worth and how she achieved success; let’s take a look at some of the lessons we can learn from her:

Boxing is always serious. Nothing comical or funny about boxing.

Each fight teaches you something, and a new history is written in each fight.

You can chase your dream at whatever age you are in.

How much is Juan Manuel Marquez worth?

Juan Manuel Marquez’s net worth is estimated to be $20 Million.

How old is Juan Manuel Marquez?

How tall is Juan Manuel Marquez?

Juan Manuel Marquez is a retired Mexican boxer. Marquez started training boxing when he was 8 years old with his father’s encouragement.

By the time he retired, he had won 56 of his 64 bouts with seven losses and one draw. He is best known for being a fast and highly technical boxer who is willing to engage in slugfests with opponents and is credited for his toughness; in a career spanning more than twenty years.

What do you think about Juan Manuel Marquez’s net worth? Leave a comment below.