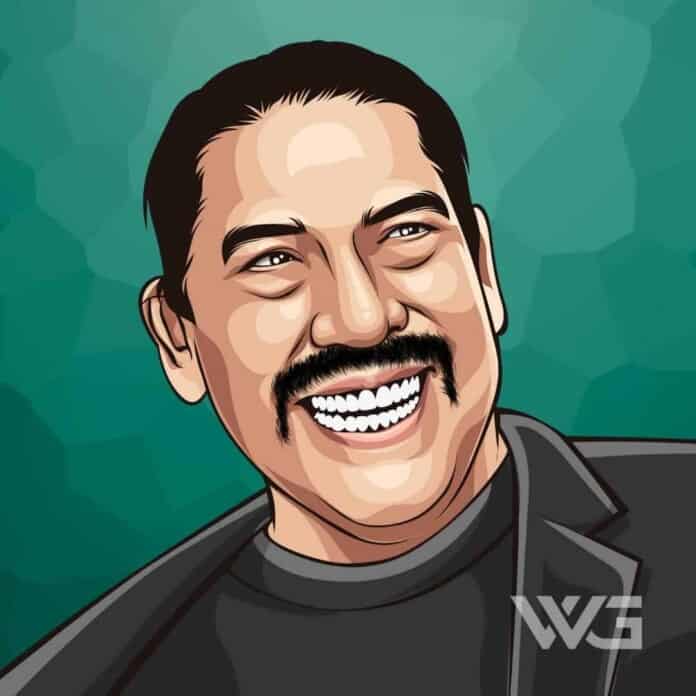 What is Danny Trejo’s net worth?

As of December 2022, Danny Trejo’s net worth is estimated to be $8 Million.

Danny Trejo is a Mexican-American actor who has appeared in several Hollywood films throughout his career. We especially know him from his roles in Heat (1995), Desperado (1995), Con Air (1997), and Spy Kids (2001).

Trejo was born in Echo Park and he began his career as an actor when he got small roles in films as a boxer.

He has earned his net worth by appearing in numerous roles that are often anti-heroes, villainous, and hyper-masculine.

Danny Trejo was born in Echo Park, Los Angeles on the 16th of May, 1944. He is the son of Dan and Alice Trejo. He became the champion boxer in the lightweight and welterweight divisions.

Trejo became a member of a twelve-step program which he credits with his success in overcoming his drug addiction.

Trejo recalled that he had been sober for over 42 years. Director Andrei Konchalovsky saw Trejo’s boxing skills and gave him a chance to introduce him to the acting world.

Danny Trejo started his early career by working for various rehabilitation and counseling program. During this time he met the director of the film ‘Runaway Train’.

He was recognized by the screenwriter Edward Bunker who later hired Trejo to train Eric Roberts for a boxing scene. The film director Andrei Konchalovsky later offered Trejo a small part in the project.

Since then Trejo has built up an impressive resume, appearing in several movies including ‘Penitentiary III’, ‘The Hidden’, and ‘Death Wish 4: The Crackdown’. He also starred in movies such as ‘Bulletproof’, ‘Lock Up’, ‘Marked For Death’ and ‘Against the Wall’.

Trejo was also a part of the cast of ‘Heat’ (1995) which also included Robert De Niro and Al Pacino.

In 2007, Trejo won Best Actor for ‘Valley Angels’ and he was also inducted into the Texas Film Hall of Fame in 2012.

In the 2012 action film ‘Bad Ass’ and ‘Bad Ass 2’ Trejo portrayed Frank Vega, a down-and-out Vietnam War veteran where he played Jack, who was a criminal in Philip Shih’s crime horror ‘Reaper’ (2015).

Trejo is equally at ease on the small screen, guest-starring in some of the biggest shows in the industry. He has appeared in ‘Alias’, ‘Baywatch’, ‘Bones’, ‘Lost, and ‘The Family Guy’.

Here are some of the best highlights of Danny Trejo’s career:

“The blessing that this film business has given me is that when I walk into a school I automatically have everyone’s attention. They want to hear what the guy from ‘Con Air’ and ‘Desperado’ has to say.” – Danny Trejo

“The first five years of my career, I was Inmate #1, Bad Guy #1 and Mean Guy #1. I had a great career going until somebody told me that I was typecast. I said, “Well, what’s typecast?” And they said, “Well, you’re always playing the mean Chicano dude with tattoos.” I thought about that and I said, “Wait a minute! I am the mean Chicano dude with tattoos, so somebody is getting it right.” – Danny Trejo

“I’d always rather be working – and you know what? My kids would rather me be working. If I stay at home, I’ll only buy another car or spend their money.” – Danny Trejo

Now that you know all about Danny Trejo’s net worth, and how he achieved success; let’s take a look at some of the success lessons we can learn from him:

There is no better lesson than helping others among us, it can be easy and sometimes very hard. We have to keep in mind what goes around comes around and everyone deserves to be happy.

The secret behind having a great life is to trust the people close to you that have been by your side in good times and bad times.

Always respect people, especially if you’re younger than the person you’re talking to. The elders have been on this earth for quite a time and it’s good to show respect.

How much is Danny Trejo worth?

Danny Trejo’s net worth is estimated to be $8 Million.

How old is Danny Trejo?

How tall is Danny Trejo?

Danny Trejo is one of the biggest actors in Hollywood. He has appeared in movies including Heat, Con Air, and Spy Kids. Today he is still a successful actor and he has a lot of upcoming projects. Trejo has collaborated with brilliant actors such as Pat Morita, Antonio Banderas, and Alexa Vega.

As of December 2022, Danny Trejo’s net worth is estimated to be $8 Million.

What do you think about Danny Trejo’s net worth? Leave a comment below.