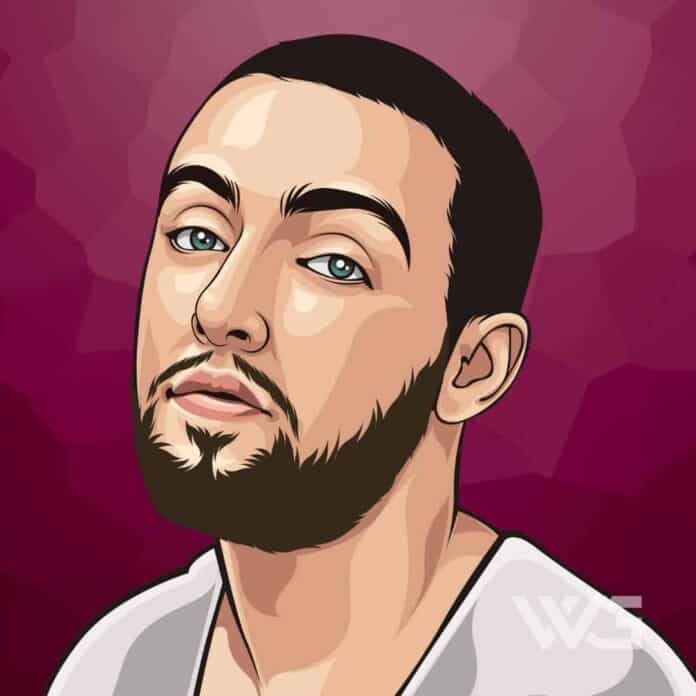 What was Mac Miller’s net worth when he passed away?

At the time of his death, Mac Miller’s net worth was approximately $9 Million.

Malcolm James McCormick, more famously known as Mac Miller, was a rapper and record producer who had been in the music industry for about 10 years. Over the years he gained a tremendous following and had numerous hit songs.

Malcolm James McCormack was born on January 19, 1992, in Pittsburgh Pennsylvania.

His mother is a photographer and his father an architect; they had both come from very different religious backgrounds. Although his father was a Christian and his mother was Jewish, Mac Miller was primarily raised as a Jew and had a Bar mitzvah.

While growing up, he attended both Winchester Thurston school and Taylor Allderdice high school.

When he was in school, Miller showed great interest in participating in sports as well as learning to play multiple instruments. He taught himself how to play the piano, drums, guitar, and bass.

At the age of 14 he began rapping for the first time, and a year later he decided to focus his talents on hip-hop music.

At 14 years old Mac released his very first mixtape called ‘But My Mackin’ Ain’t Easy’ and went by the name of EZ Mac. He also joined ‘The III Spoken’ a rap group.

In 2008, during his time in the rap group, Mac released a mixtape called ‘How High,’ and after seeing the success from the mixtape, he released two of his own called ‘The Jukebox: Prelude to Class Clown’ and ‘The High Life.’

In 2009 he was a participant of the MC competition at shadow lounge, and in 2010 he signed a record deal with Rostrum Records.

During this time he was also receiving invitations and praise from several other record producing companies, but he decided to stay with Rostrum Records as it was in his hometown.

In 2010 he released a new mixtape called ‘K.I.D.S’ and later that year he also began his tour, ‘The Incredibly Dope Tour’, which sold out in all locations immediately.

In 2011 he also made his first TV appearances in shows including ‘Single Ladies’ and ‘Jams Fab Five.’

In 2013 Mac released another album titled ‘Watching Movies With The Sound Off’ and he started his very own record label called ‘REMember Music.’

The year 2015 brought his third album ‘GO:OD AM,’ and in 2016 he released one of his most popular albums ‘The Divine Feminine.’

On the 6th September 2018, Mac Miller was found dead after a suspected drug overdose.

At the time of his death, Mac Miller’s net worth was estimated to be $9 Million.

Here are some of the best highlights of Mac Miller’s career:

“No matter where life takes me, you’ll find me with a smile. Presumed to be happy, always laughing like a child. I never thought life could be this sweet! It’s got me cheesing from cheek to cheek!” – Mac Miller

“Stand by those who stand by you.” – Mac Miller

“If you didn’t make mistakes you wouldn’t get far.” – Mac Miller

“Enjoy the best things in your life cuz you ain’t gonna get to live it twice.” – Mac Miller

View our larger collection of the best Mac Miller quotes!

3 Rules for Success from Mac Miller

Now you know all about Mac Miller’s net worth, and how he was able to achieve success; let’s look at some of the success lessons we can learn from him:

Finding people who will stand by your side no matter what kind be hard. So once you’ve found them, make sure you do everything you can to keep them in your life.

2. Enjoy everything in life

Take the time to appreciate everything in your life, because you only get the chance to experience your life once and all those precious moments will pass you by in the blink of an eye.

Change is a part of life, and no matter how many things go wrong, you should always remember that life goes on and there is nothing you can do to change what has already been done.

Mac Miller was a famous rapper and record producer who only became a mainstream name in the industry, just a short time before his death.

He was exceptionally talented and had acquired a tremendous following throughout his career.

At the time of his death, Mac Miller’s net worth was approximately $9 Million.

What do you think about Mac Miller’s net worth? Leave a comment below.