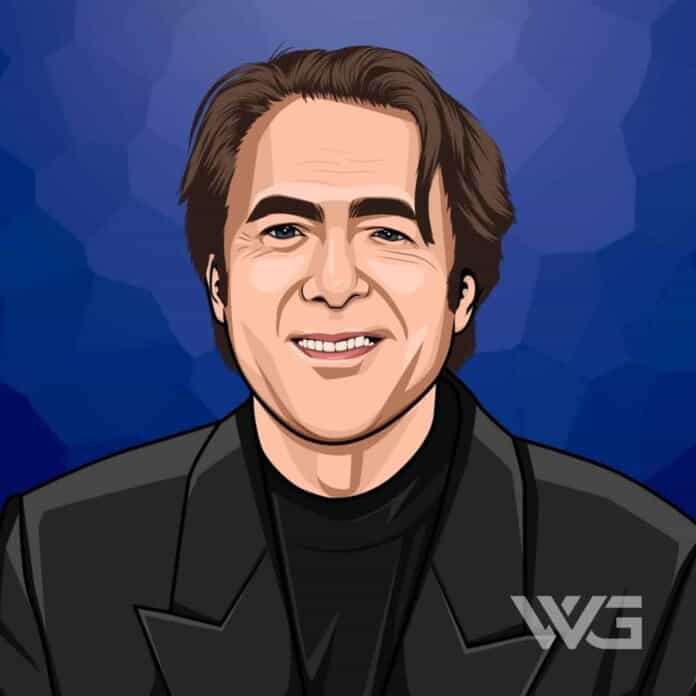 What is Jonathan Ross’ net worth?

As of December 2022, Jonathan Ross’ net worth is approximately $35 Million.

Jonathan Stephen Ross is an English radio presenter, film critic, comedian, and actor from St Pancras. Ross is best known for presenting the BBC One chat show ‘Friday Night with Jonathan Ross’ during the 2000’s.

He also hosted his own radio show on BBC Radio 2, where he acted as a film critic and presenter of the ‘Film’ programme.

Jonathan Stephen Ross was born in St Pancras, London on the 17th of November, 1960.

Ross grew up in Leytonstone and is the brother of the media personality Paul Ross, TV producer and actor Miles Ross, and Simon Ross.

Ross attended Norlington School for Boys and then studied Modern European History at the School of Slavonic and East European Studies in London, which today forms part of University College London.

Jonathan Ross started his career as a researcher for the show ‘Loose Talk’ which was a huge hit on the Channel 4. Following this, he also worked as a researcher on ‘Soul Train’. He made his debut appearance in an episode of the British sitcom ‘It Ain’t Half Hot, Mum’.

Ross began presenting the documentary series ‘The Incredible Strange Film Show’ in 1988 in which he showcased the works of many cult filmmakers like Sam Raimi and Jackie Chan.

In 1989, Ross launched a chat show ‘One Hour with Jonathan Ross’ on Channel 4 which featured ‘Knock Down Ginger’.

His big breakthrough came in the 1990’s and 2000’s when he was chosen to replace Barry Norman in ‘The Film Programme’ in 1999. Ross later joined BBC Radio 2 as a presenter. The show turned out to be extremely popular and became one of the most popular stations in the U.K.

In 2006, Ross presented a three-part documentary on film industry named ‘Jonathan Ross’, ‘Asia Invasion’ in which he introduced the film industry in Japan, Hong Kong, and South Korea.

The following year, Ross was named the highest paid television personality in Britain.

Since then, he is busy presenting his chat show, ‘The Jonathan Ross Show’ and is also aired in countries like New Zeeland, Sweden, and Australia.

As of December 2022, Jonathan Ross’ net worth is estimated to be $35 Million.

Here are some of the best highlights of Jonathan Ross’ career:

A common mistake is going too quick too soon, it’s like riding a bike. People get nervous about making a mistake but it’s not that difficult to learn as long as they don’t get too stuck in their own head.” – Jonathan Ross

“The longer the rope, the more challenging because you have to generate more force, you want to see that move travel all the way down to that anchor point. Another mistake, Jonathan Ross added, is pulling the ropes too tight.” – Jonathan Ross

“My love affair with comics is more important to me than my love of films, or my work in TV, or just about anything outside my family. You’re hardwired for it, if you fall in love with comics when you’re 11. And I think if there’s one good thing I can maybe achieve with – with ‘my celebrity’, it’s to try to broaden the horizons and widen the readership of this particular entertainment which I adore and which is somewhat belittled and denigrated and ignored. I just want to see comics getting a fair critical chance.” – Jonathan Ross

“My talk show is not an interview show as such, which is why I’m always bemused when critics say the interview wasn’t very good. And I think, but I’m not doing an interview! What I’m trying to do is make a comedy show. And that, trust me, is a fuck of a lot harder.” – Jonathan Ross

How much is Jonathan Ross worth?

Jonathan Ross’ net worth is estimated to be $35 Million.

How old is Jonathan Ross?

How tall is Jonathan Ross?

Jonathan Ross is known for being one of the highest paid television personality in Britain, and there is no doubt that his net worth will keep rising.

Ross has been on multiple radio shows and also presented many documentaries that have been famous all over the world.

As of December 2022, Jonathan Ross’ net worth is estimated to be roughly $35 Million.

What do you think about Jonathan Ross’ net worth? Leave a comment below.