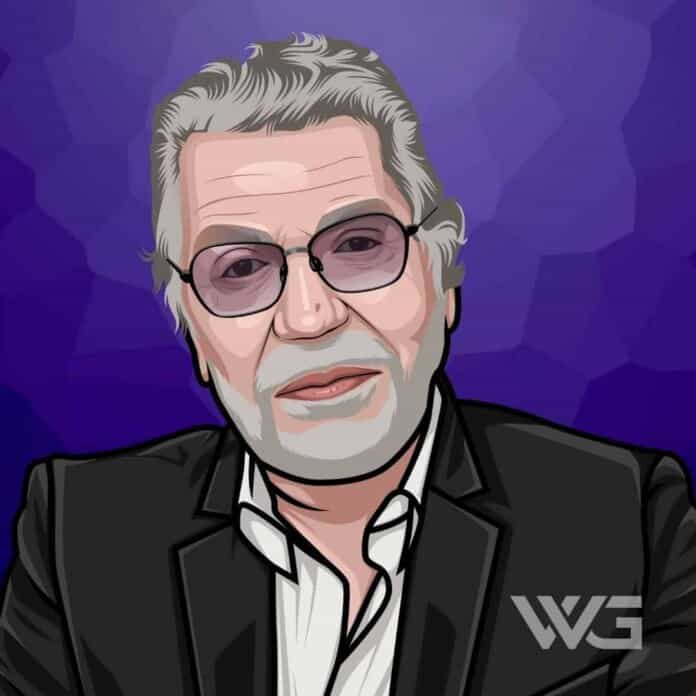 What is Roberto Cavalli’s net worth?

Cavalli is best known for exotic prints and for creating the sand-blasted look for jeans. He sells luxury clothing, perfume, and leather accessories. Former Acne Studios creative consultant Paul Surridge succeeded Peter Dundas as creative director for the brand in 2017.

Roberto Cavalli was born on the 15th of November, 1940, in Tuscany.

Cavalli enrolled at the local Art Institute, concentrating in textile print. He made a series of flower prints on knit that caught the attention of major Italian hosiery factories.

In the early 1970s, Cavalli invented and patented a printing procedure on leather and started creating patchworks of different materials. He debuted these techniques in Paris, immediately getting commissions from the likes of Hermès and Pierre Cardin.

In 1994, Cavalli presented the first sand-blasted jeans. The same year, he had opened boutiques in Saint Barth, in the French Caribbean, followed by others in Venice and Saint-Tropez.

His main line was sold in over 50 countries worldwide. RC Menswear was launched in 2000. In 2002, Cavalli opened his first café-store in Florence, revamping it with his signature animal prints.

This was shortly followed by the opening in Milan of the Just Cavalli café at Torre Branca and another boutique on Via Della Spiga. Roberto Cavalli was a judge at the Miss Universe 1977 pageant, where his future wife Eva Duringer was a contestant.

In 2013, Cavalli was awarded an Honorary Master Diploma in Fashion Management from Domus Academy in Milan during a ceremony.

The following year, he returned to the role of men’s creative director. The same year, Gianluca Brozzetti and Carlo Di Biagio announced they were leaving the fashion brand. Cavalli approached Investcorp, an investment firm in the Persian Gulf, as a potential buyer of a stake in his brand.

How Does Roberto Cavalli Spend His Money?

Roberto Cavalli spends some of his money on vehicles and real estate.

Cavalli and his wife have lived in a luxurious estate in Florence for over 35 years. The home features a formal sitting room with marble floors, a fireplace, and a working brick oven and an indoor swimming pool, and a stone steam room.

Cavalli owns a 1970 Ferrari Daytona and a helicopter.

Here are some of the best highlights of Roberto Cavalli’s career:

“Well, sometimes I say when I’m exhausted… but I feel a lot of responsibility to my fans: what they expect from me. They expect a lot, but at the same time, fashion is a part of my DNA. I could never live without it. I hope to discover something new, new, new – all the time.” – Roberto Cavalli

“There is a real vulgarity in the way women dress at the moment. They show off too much and try too hard. They don’t understand where the line is between sexy and vulgar. I know where that line is.” – Roberto Cavalli

“Fashion should be something that in the morning, when you open your window, you say, ‘Oh fantastic, sun!’ Then you take your shower, you say, ‘OK fantastic, which color do I wear today because I feel happy?’ This should be fashion.” – Roberto Cavalli

“My devotion to my job started from a personal defeat: my first girlfriend’s parents rejected me because I wasn’t rich. I decided I would show them what a big mistake they had made.” – Roberto Cavalli

“I began to speak well at a very advanced age – 15, 16, 17 years old. It was psychological: the trauma of war, my family, and growing up on my own. I was more or less a street kid.” – Roberto Cavalli

“Have to be like people expect because people love to dream with me. They like to think that I love my boat of 50 meters, that I drink Cristal for breakfast, that I dance until five o’clock in the morning. I am not like that.” – Roberto Cavalli

Now that you know all about Roberto Cavalli’s net worth and how he achieved success; let’s take a look at some of the lessons we can learn from him:

Everything you can imagine is real.

Yesterday is history. Tomorrow is a mystery. Today is a gift.

We accept the love we think we deserve.

How much is Roberto Cavalli worth?

Roberto Cavalli’s net worth is estimated to be $500 Million.

How old is Roberto Cavalli?

How tall is Roberto Cavalli?

Cavalli is best known for his exotic prints and for pioneering the look of sand-blasted jeans. He also established his own luxury fashion house, which sells clothing, leather accessories, perfume, and jewelry, and he develops interior design projects for high-end buildings.

What do you think about Roberto Cavalli’s net worth? Leave a comment below.