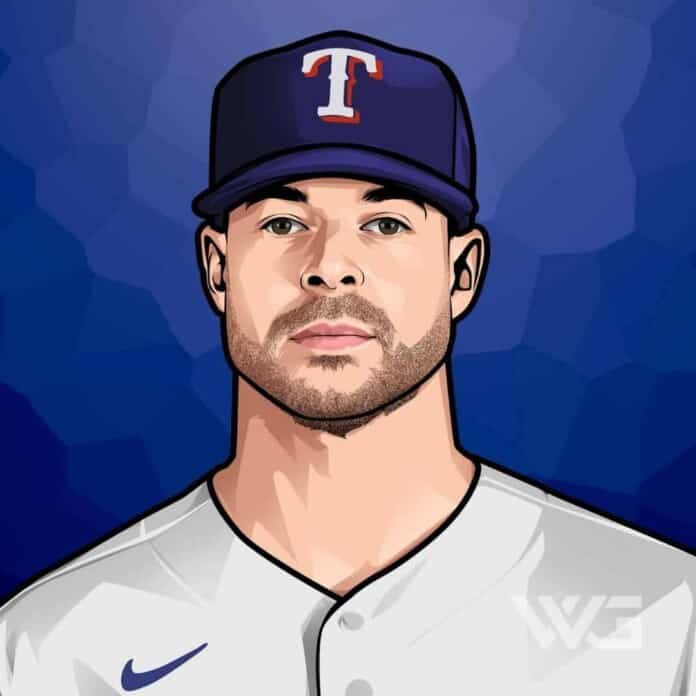 What is Corey Kluber’s net worth?

Corey Kluber is an American professional baseball pitcher for the Texas Rangers of MLB.

Kluber made his MLB debut in 2011 as a member of the Cleveland Indians. A power pitcher, Kluber achieves high strikeout rates through a two-seam sinker and a breaking ball that variously resembles a slider and a curveball.

Corey Scott Kluber was born on the 10th of April 1986 in Alabama.

Kluber attended Coppell High School in Coppell, Texas. While pitching for the school’s baseball team and amid overuse by his high school coach, Don English, Kluber developed a stress fracture in his elbow, requiring surgery and the insertion of two screws.

Kluber began to draw notice from coaches at Stetson University when he pitched at the World Wood Bat Championships in Jupiter, Florida.

Kluber was drafted by the San Diego Padres in the fourth round of the 2007 MLB Draft.

The Padres traded Kluber to the Cleveland Indians on July 31, 2010, in the three-team trade between the Padres, Indians, and St. Louis Cardinals that sent Jake Westbrook to the Cardinals and Ryan Ludwick to the Padres.

Kluber played for the Columbus Clippers of the Class AAA International League in 2011, pitching to a 7–11 win-loss record and a 5.56 ERA.

On November 7, Kluber was announced by the BBWAA as a finalist for the 2016 American League Cy Young Award, along with Justin Verlander and Rick Porcello.

Here are the best highlights of Corey Kluber’s career:

“All of the above. We never sat down and said it has to be this amount of money or it won’t happen. From talking to other guys who have done deals, when it gets to the point that you want, you know.” – Corey Kluber

“I consider myself to be healthy at this point. I’m not rehabbing anything or tending to any issues with anything lingering or anything like that. So I’m just going to basically a normal stage my offseason right now, which is a good feeling to be at to get out of the rehab mode and just kind of try to get ready for a season.” – Corey Kluber

“Probably one of my most important criteria when looking for a team was trying to identify a team that was a contender and had a chance to win a World Series. Also, a team that I felt like I could go there and have a chance to pitch well and contribute and be a part of that.” – Corey Kluber

“I think that familiarity definitely was a good thing for me. I think that going through a couple of different things the last two years, having a familiarity with both Eric and Matt is something that I considered when making this decision.” – Corey Kluber

“I spent a lot of time correcting those issues to where now I feel like the way I like to feel. I feel like I’m able to go out there and throw the ball the way that I did when I felt like I was at my best.” – Corey Kluber

Now that you know all about Corey Kluber’s net worth and how he achieved success; let’s take a look at some of the best lessons that we can learn from him:

1. Success Is Different For Each Person

Success is different for everyone; everybody defines it in their own way, and that’s part of what we do in ‘Close Up,’ finding what each person wanted to achieve and what their willingness to sacrifice for that was.

Stop trying to impress people by being someone you’re not because, in the end, you’ll lose yourself.

How much is Corey Kluber worth?

Corey Kluber’s net worth is estimated to be $12 Million.

How old is Corey Kluber?

How tall is Corey Kluber?

Kluber was drafted in the fourth round of the 2007 MLB Draft by the San Diego Padres. He was named Pitcher of the Week in the Midwest League, California League, and Texas League.

What do you think about Corey Kluber’s net worth? Leave a comment below.