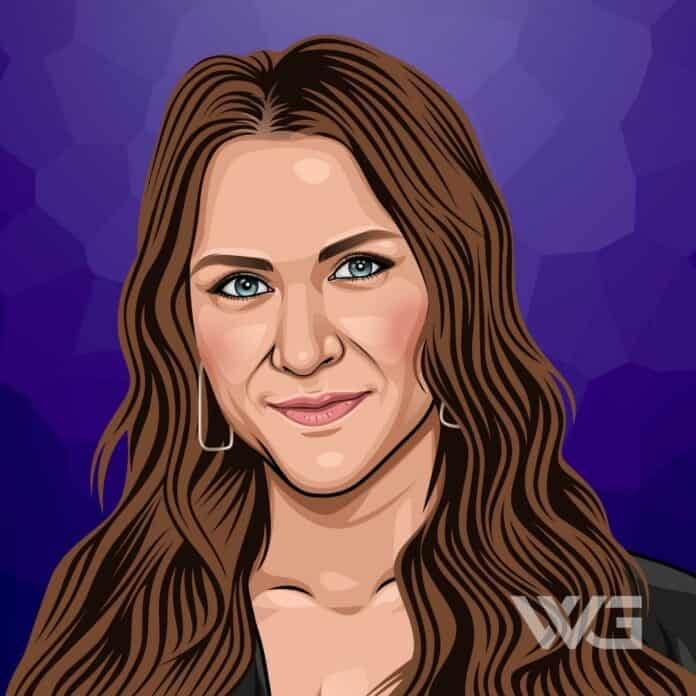 What is Stephanie McMahon’s net worth?

Stephanie McMahon is a renowned fighter who has bossed around some of WWE’s most powerful men. She is a world champion and is referred to as one of the most powerful women on cable TV.

Stephanie has taken on the man’s world of wrestling and has been an inspiration to female wrestlers everywhere.

Despite being the daughter of the CEO, Vince McMahon, it was Stephanie who used her skills and strength to work her way up in the WWE ranks.

As of December 2022, Stephanie McMahon’s net worth is estimated to be $150 Million.

Shortly after her birth, her family moved to Greenwich, with Stephanie attending Greenwich Country Day School.

Both of her parents, Linda and Vince McMahon, are renowned wrestling promoters. She became thoroughly involved in the wrestling world, with Stephanie joining the World Wrestling Federation at the age of 13 where she modeled the merchandise.

In 1994, she graduated from Greenwich High School and attended Boston University.

She graduated in 1998 with a Bachelor of Science in communications and soon after her graduation, started full-time work at the World Wrestling Federation.

At the beginning of her career, Stephanie worked as a receptionist, working her way up to account executive.

She made her first ring appearance in 1999 as part of a storyline involving The Undertaker. She was 23 years old at the time and played the role of a sweet and innocent girl to help fuel the feud between her father and The Undertaker.

The storyline became a bit extreme as it resulted in The Undertaker kidnapping her and threatening to marry her, but the wrestler, “Stone Cold” Steve Austin, saved her.

Her on-screen performances didn’t stop there, as she began a relationship with Test. This relationship started a feud with her brother, Shane McMahon, which continued for years.

Test asked Stephanie to marry him during an in-ring ceremony but was cut short by Triple H, who revealed that he had drugged her and married her in Vegas. Stephanie and Triple H were dating in real life and there was no drugging involved.

After all the engagement drama, Stephanie lost a match against her mother and disappeared from TV for two years.

She returned with a villain-like personality and feuded with Stone Cold Steve Austin. Throughout the next few years, it was drama after drama until Stephanie eventually disappeared once again from RAW in 2008.

In 2013, she became the Chief Brand Officer of World Wrestling Entertainment. She and her husband returned as a power couple and were named The Authority. She became the commissioner of RAW in 2016.

Throughout her career, she has appeared on various ESPN shows such as Jimmy Kimmel Live! and The Howard Stern Show. She has been named “The Billionaire Princess” and is one of the richest women in the United States.

In 2018 Stephanie announced her retirement, choosing to spend more time with her family.

Stephanie is a multi-talented wrestler with an excellent understanding of what her audience wants and expects from the wrestlers they follow.

Her skills in the ring and as a representative of the WWE management ensured that she earned an impressive income over the years.

As Stephanie is now retired, she is no longer wowing the crowds with her wrestling expertise. But with the money she’s earned over the years, she will certainly not be struggling.

Stephanie knows a great deal about how the wrestling business works as she is a 4th generation wrestling promoter.

With her involvement in the ring, she was able to help steer the marketing and scripting in a direction that would make the wrestling franchise a great deal of money.

Here’s a breakdown of Stephanie McMahon’s annual net worth:

Stephanie is very wealthy in her own right, having worked her way up through the ranks in WWE and taken her fair share of knocks in the process.

She owns 2.5% of the shares in WWE and will no doubt receive more once her parents retire one day.

After much on-screen drama, Stephanie married her fellow WWE wrestler, Paul Levesque, known by his onscreen name Triple H, in 2003. The power couple has been together since 2000 and has three daughters.

Stephanie remains one of the richest women in the USA despite taking a break from the day-to-day activities of the wrestling business.

You can catch up with her on her official Instagram account where you’ll get a glimpse of her with her three daughters and husband while enjoying her retirement.

As a highly educated woman, Stephanie has made inroads into the previously male-dominated world of wrestling.

By playing a role in the rough and tumble world of wrestling, Stephanie has shown young women the way to business and financial success.

Here are some of the more memorable moments from Stephanie McMahon’s career:

It is unlikely that an over-achiever like Stephanie will remain out of the limelight for long. We are sure that she will make a comeback sometime soon.

How Does Stephanie McMahon Spend Her Money?

Stephanie is known for her push to have WWE help various charity organizations. As a member of WWE’s management team and in her personal capacity, Stephanie has made large donations to various charities.

As with most rich celebrities, real estate plays a large part in her investment portfolio. She has invested a great deal of money in various properties in Washington DC, Florida, Los Angeles, and New York.

She has an impressive collection of some of the most expensive cars in the world, including such classics as a Mercedes AMG GT-R, Rolls-Royce, Ferrari, and Lamborghini.

Stephanie has always had a clear vision of what she wants out of life, and in particular, how her career would support her dreams.

She’s been recognized for her sporting prowess and her management ability, which just goes to show that dynamite does indeed come in small packages.

Here are some of the best highlights of Stephanie McMahon’s career:

Following her successful ring career, she has stepped from the arena to focus on bringing up her family.

However, she is still a shareholder and an office-bearer in the WWE company, so she is no doubt pulling the strings still.

You don’t get as far in any sport or business without some serious talent and a strong set of values.

Stephanie embodies everything that one would expect from one of the richest women in the USA.

Here are our favorite quotes from Stephanie McMahon:

1. Don’t Let Others Bully You Out Of Doing What You Love Most

Stephanie wasn’t named one of the most powerful women for nothing. Going into a man’s world was tough for her, but she stood her ground and didn’t let anything or anyone get in the way of her dreams.

2. It Is Always Important To Give Back To Your Community

She has always found that giving back is important, as it can help and inspire others who are less fortunate. This attitude was instilled into Stephanie from a young age by her parents.

3. Take A Stand For What You Believe In

There were many controversies around Stephanie being a woman in wrestling, but she always stood up and expressed her beliefs in helping others achieve their dreams, no matter their gender.

Stephanie has helped inspire women everywhere and given back to the community in many ways, not letting her fame get in the way of her beliefs.

Becoming one of the richest and most powerful women in America was tough, but Stephanie was determined and worked hard to get what she wanted.

As of December 2022, Stephanie McMahon’s net worth is estimated to be $150 Million.

What do you think about Stephanie McMahon’s net worth? Leave a comment below.