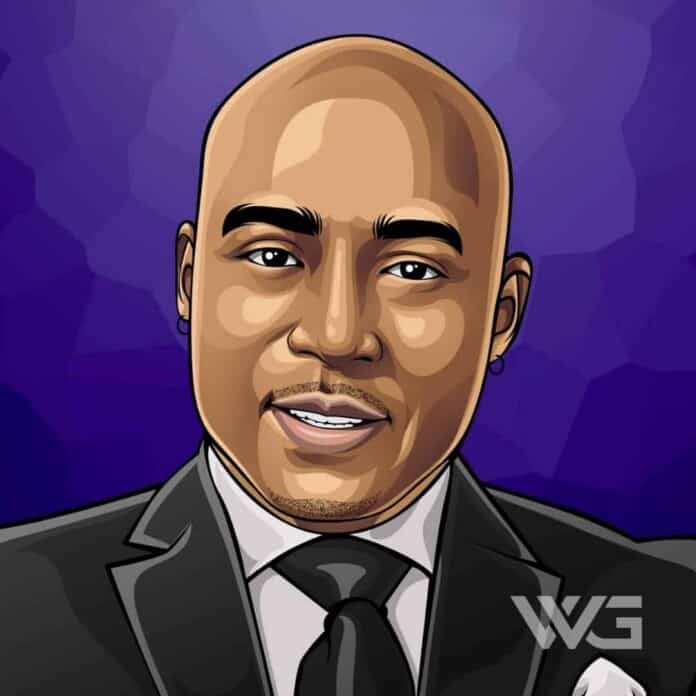 What is Daymond John’s net worth?

As of February 2023, Daymond John’s net worth is estimated to be roughly $350 Million.

Daymond Garfield John is an American businessman, author, motivational speaker, and investor from Brooklyn. John is best known to be the founder, CEO, and president of FUBU. He also appears as one of the investors on the ABC reality show ‘Shark Tank’.

John is the founder of The Shark Group which was based in New York City.

Daymond Garfield John was born in Brooklyn, New York on the 23rd of February, 1969. John grew up in the Queen’s neighborhood of Hollis. In high school, John was often in a program that allowed him to work a full-time job and attend school on an alternating weekly basis.

John never attended college, so that he could begin his career and supporting his family as soon as possible. His career started when he became the CEO and president of the company FUBU.

Daymond John’s career started when he set up the FUBU business. He began working at Red Lobster to generate funds, he also started to work with his friends, J.Alexander Martin, and Keith Perrin to sew the FUBU logo on hockey jerseys.

John is one of the main investors on ‘Shark Tank’, a television show where business executives listen to business pitches and decide which venture to invest their money in. Barbara Corcoran, Lori Greiner, Mark Cuban, and Robert Herjavec, are also sharks on the show.

He became associated with brands; Pitbull and Miss Universe organization as a public speaker. John addresses gatherings on negotiations, marketing, and entrepreneurship.

Daymond has won multiple awards throughout his career. He was awarded the Brandweek Marketer of the Year, and also the NAACP Entrepreneurs of the Year twice. John has starred in the television series; ‘The Game’ and ‘The Real’ as of 2013, and has acted in the films ‘The Crow: Wicked Prayer’ and ‘Sharknado 2’.

Here are some of the best highlights of Daymond John’s career:

“Learn as many mistakes and what not to do while your business or product is small. Don’t be in such a hurry to grow your brand. Make sure that you and the market can sustain any bumps that may occur down the road.” – Daymond John

“The things that I’ve learned is, try to make all the mistakes with your own money and on a small level so that when you are responsible for a partner’s money or assets, you’ve learned, and you don’t make bigger mistakes.” – Daymond John

“When looking at trends I always ask myself basic and timeless questions about business, and the one I seem to always come back to is, ‘How is this different than anything else in the marketplace?’” – Daymond John

“An entrepreneur needs to know what they need, period. Then they need to find an investor who can build off whatever their weaknesses are – whether that’s through money, strategic partnerships or knowledge.” – Daymond John

“Five days a week, I read my goals before I go to sleep and when I wake up. There are 10 goals around health, family, and business with expiration dates, and I update them every six months.” – Daymond John

“Fortunately, right now ‘entrepreneurship’ is one of the business world’s biggest buzzwords and so many young people in our country are looking up to this new generation of CEO’s as their modern-day rock stars. Whenever you have that effect, it makes the job of promoting entrepreneurship much easier.” – Daymond John

View our larger collection of the best Daymond John quotes!

How much is Daymond John worth?

Daymond John’s net worth is estimated to be $350 Million.

How old is Daymond John?

How tall is Daymond John?

Daymond John has appeared in several films and tv-shows throughout his career. John is a talented investor that also has starred in the reality investor program ‘Shark Tank’ where he invested in a lot of companies.

There’s no doubt that John’s net worth will continue to increase, his net worth is incredible and one of the biggest reasons because of that is his business FUBU.

As of February 2023, Daymond John’s net worth is estimated to be roughly $350 Million.

If you like this article, don’t forget to check out our article about Jordan Belfort net worth.

What do you think about Daymond John’s net worth? Leave a comment below.