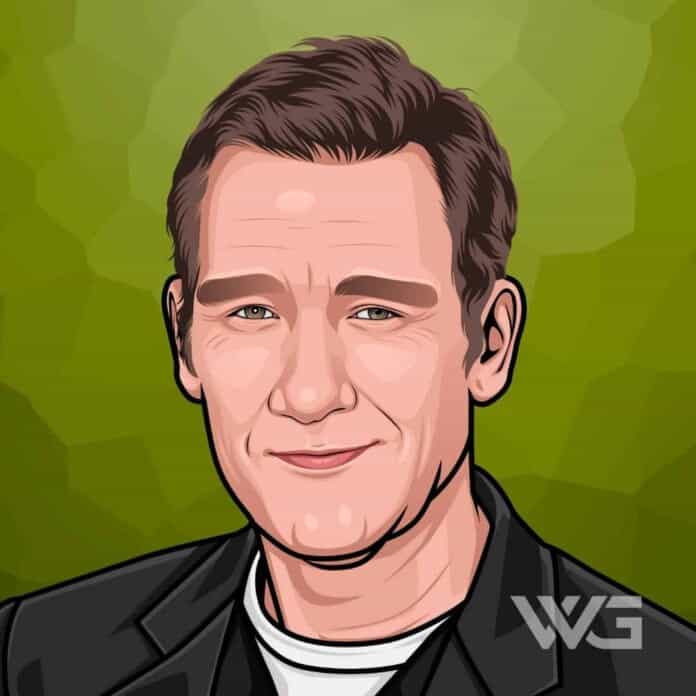 What is Clive Owen’s net worth?

Clive Owen is an English actor. Owen rose to fame in the series Chancer,’ which aired from 1990 to 1991.

He received critical acclaim for his work in the film ‘Close My Eyes’ before earning international attention for his performance as a struggling writer in ‘Croupier.’

In 2005, he won a Golden Globe and a BAFTA Award and was nominated for an Academy Award.

As of November 2022, Clive Owen’s net worth is estimated to be roughly $30 Million

Clive Owen was born on the 3rd of October, 1964, in Keresley, Coventry.

His father left the family when Owen was 3 years old. He was then raised by his mother and stepfather, a railway ticket clerk.

He graduated from the Royal Academy of Dramatic Art. After graduation, Owen worked at the Young Vic, performing in several Shakespearean plays.

In 2005, Owen won a Golden Globe and BAFTA Award and was nominated for an Academy Award for Best Supporting Actor for his appearance in the drama ‘Closer’.

Some of his other leading roles include ‘Sin City,’ ‘Derailed,’ ‘Inside Man,’ ‘Children of Men’ and ‘The International’.

He became well known to North American audiences in the summer of 2001 after starring in ‘The Hire,’ a series of short films sponsored by BMW and created by prominent directors.

The following year, he appeared in ‘The Bourne Identity’ and reteamed with Mike Hodges in ‘I’ll Sleep When I’m Dead’. He starred in ‘Beyond Borders’ and won the title role in King Arthur.

In 2006, Owen became patron of the Electric Palace Cinema in Essex, England. He launched an appeal for funds to repair deteriorating elements of the fabric.

Owen enjoys the music of the indie rock band Hard-Fi and has even been seen attending some of their concerts. He is also a supporter of Liverpool Football Club; Owen narrated the fly on the wall documentary television series ‘Being: Liverpool about the club.’

As of November 2022, Clive Owen’s net worth is estimated to be roughly $30 Million

How Does Clive Owen Spend His Money?

Clive Owen spends some of his money on real estate and charity work.

Owen spends some of his money on charity work such as Aegis Trust, Free The Children, Laureus Sport for Good Foundation
and Malala Fund.

Here are some of the best highlights of Clive Owen’s career:

“You go back to those films of the ’40s and ’50s and hear the dialogue, the way the people played off each other, the wordplay. I think we’ve really lost that in movies.” – Clive Owen

“I’m always very aware of the physical challenges of work. I train much more than I did when I was in my twenties, and I’ve done some very physical films, and I always get properly prepared for them and get as fit as I can.” – Clive Owen

“Something I don’t like seeing in other people is naked ambition when somebody is really pushing hard to get to where they want to be. That’s the way I look at that word – like you must be stepping on someone to get there. And I’ve never been comfortable with that.” – Clive Owen

“I’m sort of one of those weird actors who whenever I do a play, I think, ‘Oh, we should film this,’ as opposed to have to belt it out of ourselves in a theater auditorium.” – Clive Owen

“I don’t like it when people are trying too hard. That goes for clothes, for acting, for everything. It’s just not good when it seems like you’re making too much of an effort.” – Clive Owen

Now that you know all about Clive Owen’s net worth and how he achieved success; let’s take a look at some of the lessons we can learn from him:

The sexiest part of the body is the eyes.

Every journalist who is not too stupid or too full of himself to notice what is going on knows that what he does is morally indefensible.

If you explode onto the scene at a very young age, there are so many people pulling you in different directions. It takes time to recalibrate and see what’s important.

How much is Clive Owen worth?

Clive Owen’s net worth is estimated to be $30 Million.

How old is Clive Owen?

How tall is Clive Owen?

Clive Owen is an English actor. Owen was born in Keresley.

He rose to fame when he portrayed the lead in the ITV series ‘Chancer’ from 1990 to 1991. Besides this, he received critical acclaim for his work on the films ‘Close My Eyes’ and ‘Croupier’.

As of November 2022, Clive Owen’s net worth is estimated to be roughly $30 Million.

What do you think about Clive Owen’s net worth? Leave a comment below.