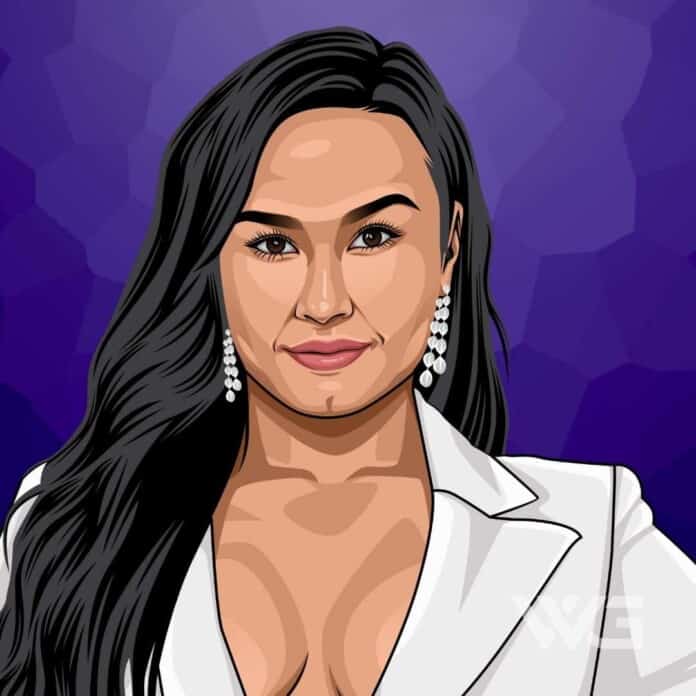 What is Demi Lovato’s net worth?

As of February 2023, Demi Lovato’s net worth is approximately $40 Million.

Demetria “Demi” Devonne Lovato is an American songwriter, singer, and actress from Albuquerque.

She initially gained recognition when she starred as Mitchie in Torres in the Disney Channel television movie ‘Camp Rock’ (2008) and its sequel ‘Camp Rock: The Final Jam’ (2010).

Today she is one of the best pop singers and she has received several awards for her work as an actress and singer.

Demetria “Demi” Devonne Lovato was born in Albuquerque, New Mexico on the 20th of August, 1992. She is the daughter of former cheerleader Dianna De La Garza and musician Patrick Martin Lovato. Her parents divorced in early 1994’s, Lovato was later raised in Dallas, Texas.

In 2002 she began her acting career when she first starred in ‘Barney & Friends’.

A few years later she had her breakthrough in her career when she starred alongside ‘The Jonas Brothers’ in the Disney Channel film ‘Camp Rock’ (2008). Lovato later released her debut album ‘Don’t Forget’ (2008).

Demi Lovato’s career started in 2006 when she made a guest appearance in the acclaimed television series ‘Prison Break’ and followed it up with a cameo in the series ‘Just Jordan’.

One year later she was the lead character as ‘Charlotte Adams’ in the first season of ‘As The Bell Rings’ which was aired on the ‘Disney Channel.

The following year, Lovato starred in ‘Camp Rock’ which held its premiere in June 2008. She later ventured into singing and composed her album titled ‘Don’t Forget’ which earned her critical and commercial success. 89,000 copies of her album were sold in its first week.

In 2009 she achieved the ‘Choice Music Tour Award’ at the ‘Teen Choice Awards‘ and her single ‘Skyscraper’ received ‘Best Video With A Message’ award at the ‘MTV Video Music Awards’ in 2012.

Lovato released her album titled ‘Unbroken’ in 2011 where the songs from the album received mixed responses from the critics.

Her single ‘Skyscraper’ topped the ‘Billboard’ countdown chart. One year later she became one of the judges of the reality show ‘The X-Factor’ where she received the skills of many aspiring singers.

Demi released an album titled ‘Glee’ in 2013 which turned out to be a best-seller of the year and the tracks were considered infectious by the music lovers.

Lovato has inspired many by her songs throughout her career as a singer even though she also is fighting against drugs problem and mental health illnesses.

Here are some of the best highlights of Demi Lovato’s career:

“I have come to realize making yourself happy is most important. Never be ashamed of how you feel. You have the right feel any emotion you want, and do what makes you happy. That’s my life motto.” – Demi Lovato

“And if there’s anyone out here tonight that doesn’t feel beautiful enough, or doesn’t feel worthy enough… You’re wrong. Because you guys are all so incredible. And if you’re dealing with any of the issues that I’ve dealt with, don’t be afraid to speak up, because someone will be there for you. And if you think, you’re alone, put on my music, because I’m going to be there for you.” – Demi Lovato

“Life is precious and it’s what you do with it that keeps you alive on the inside. It’s not enough just to live and take that gift for granted. Each one of us has fears, but the more we work to overcome them, the more we are able to enjoy our lives.” – Demi Lovato

Now you know all about Demi Lovato’s net worth, and how she achieved success; let’s take a look at the lessons we can learn from her:

1. Everyone is beautiful in their own way

The scars you’ve had along the way you been walking are what makes you into the person you are today. Everyone is beautiful in their own way, and we all just have to accept that.

2. You must learn to love yourself before you love someone else

3. You’re human. You are not perfect

We are supposed to live after the norm and to be perfect in front of everyone else. We all have bad days and that is more than okay. Life’s little imperfections are a reminder to us to just breathe, take a step back, and remember who you are.

How much is Demi Lovato worth?

Demi Lovato’s net worth is estimated to be $40 Million.

How old is Demi Lovato?

How tall is Demi Lovato?

Demi Lovato has inspired many, younger and elder, throughout her career as a singer.

She has experienced depression and helped many with her lyrics in her songs. Lovato has alongside many singers who worked with some of the best musicians in the industry.

As of February 2023, Demi Lovato’s net worth is approximately $40 Million.

What do you think about Demi Lovato’s net worth? Leave a comment below.