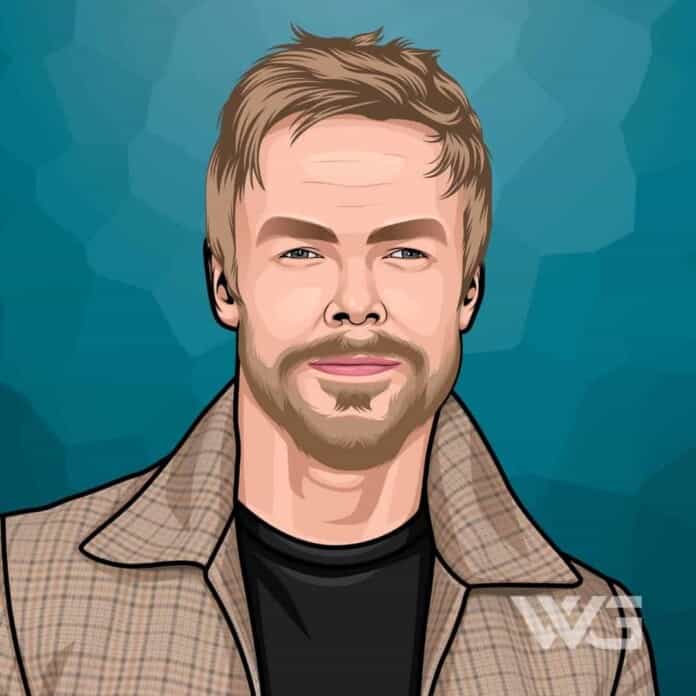 What is Derek Hough’s net worth?

Hough was a professional dancer on the dance competition series ‘Dancing with the Stars’ from 2007 to 2016.

For his work on Dancing with the Stars, Hough received nine nominations for the Primetime Emmy Awards for Outstanding Choreography, winning the award twice.

Hough is the son of Marianne and Bruce Hough. He is the second cousin of musicians Riker, Rydel, Rocky, and Ross Lynch from R5.

When he was 12 years old, his parents sent him to London to live and study with dance coaches Corky and Shirley Ballas. Hough’s sister Julianne joined him in London several months later.

Between 1998 and 2004, Hough joined many competitions that took him to several foreign nations like Japan, Netherlands, Poland, Ireland, and Czechoslovakia. In 2002, he won the ‘WDSF World Youth Latin Champion’.

In 2001, he made a guest appearance in the film ‘Harry Potter and the Sorcerer’s Stone.’He became part of a theatre cast, playing the lead in ‘Footloose: The Musical in 2006.’

The following year, he made an appearance as a guest instructor in the fourth season of the popular reality dancing show ‘Dancing with the Stars.’ The same year, he joined the crew as a professional instructor.

He took a break from reality shows when he starred in his debut film ‘Make Your Move’. In 2013, he stated that he would be working with ice dancers Meryl Davis and Charlie White for a performance at the 2014 Sochi winter Olympics.

The same year, he also directed Mark Ballas’ music video titled ‘Get My Name.’ He released his first book ‘Taking the Lead: Lessons from a Life in Motion’ the same year.

In 2015, he made an appearance at the ‘New York Spring Spectacular’ at ‘Radio City Music Hall.’ The same year, he starred in the renovation process of a four-episode series titled ‘Mark & Derek’s Excellent Flip’.

How Does Derek Hough Spend His Money?

Derek Hough spends some of his money on real estate.

Here are some of the best highlights of Derek Hough’s career:

“I enjoy being a student and learning. I don’t think you should ever stop being a student. That’s where the most creative ideas come from. Teaching is a blessing as well because I get to share what I’ve learned and my passion for creative movement with people.” – Derek Hough

There’s a huge pressure as a judge. It wasn’t easy. I certainly didn’t enjoy that factor, because it’s a big responsibility to have a million dollars in your hand to change somebody’s life.” – Derek Hough

“I wouldn’t say I’m the “nice” judge, but I was certainly reminded a couple of times that this is for a million dollars. There’s one thing to do a good dance, but I had to ask myself, “Is that the million-dollar dance?” There are certain dances that people prefer, and I preferred the intelligent and smart choreography.” – Derek Hough

“I went to a theater arts school, so I’m interested in many different projects, whether it be film, television, or even live theater. I’m a performer. That’s what I do. That’s what I want to do.” – Derek Hough

Now that you know all about Derek Hough’s net worth and how he achieved success; let’s take a look at some of the lessons we can learn from him:

Pressure doesn’t exist. We create it for ourselves.

Let’s create, not destroy. Let’s believe and not doubt.

Bullying can be physical, verbal, or emotional. Words and threats are just as painful as fists, especially with social media these days. For those of you who don’t know.

How much is Derek Hough worth?

Derek Hough’s net worth is estimated to be $8 Million.

How old is Derek Hough?

How tall is Derek Hough?

Derek Hough is an American dancer. Hough was born in Salt Lake City, and he’s coming from a dancing family.

When he was 12 years old, Derek’s parents sent him to London to study under dance coaches. He stayed there for ten years and attended the Italia Conti Academy of Theatre Arts, where he later taught.

What do you think about Derek Hough’s net worth? Leave a comment below.