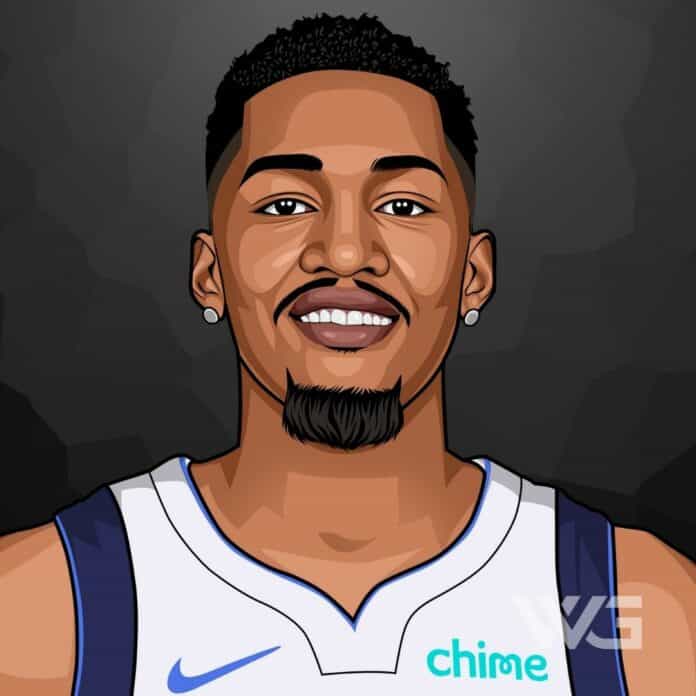 What is Dorian Finney-Smith’s net worth?

Dorian Lawrence Finney-Smith started playing basketball at I. C. Norcom High School and has since become one of the most valuable players on the Dallas Mavericks.

Consistently ranked as one of the best power forwards in the NBA, Finney-Smith has been a powerhouse on the court since he started playing professionally in 2016.

In 2022, he signed on with the Mavericks for another four years, and it is very likely he will continue with his career for many more seasons after that.

As of February 2023, Dorian Finney-Smith’s net worth is estimated to be $12 Million.

Dorian Lawrence Finney-Smith was born May 4, 1993, in Portsmouth, Virginia, and he started playing basketball at I. C. Norcom High School.

During his high school career, he averaged 19 points, 13 rebounds, and six assists per game. By the time he graduated, he was a two-time VHSL Class AAA Player of the Year and an All-Tidewater Player of the Year.

He chose to commit to Virginia Tech for college but only played one season with them before transferring to the University of Florida.

With the Florida Gators, Finney-Smith was the leading rebounder, and he recorded the first 20/15 performance in the history of the team.

Dorian Finney-Smith went undrafted during the 2016 NBA draft, but he ultimately signed with the Dallas Mavericks in July, joining them for the NBA Summer League.

He continued to play well until he was forced to miss 51 games starting in November 2017 due to left knee quadriceps tendinitis, which kept him off the court until March 2018.

In 2019, he re-signed with the Mavericks for three years on a $12 million contract, and the same year he scored a then career-high 22 points during a win against the San Antonio Spurs.

Finney-Smith signed with the Mavericks for another four years in 2022 for $52 million, and in March, he surpassed his previous career-high score by earning 28 points during a win over the Cleveland Cavaliers.

While he isn’t yet as wealthy as LaMarcus Aldridge or John Wall, Dorian Finney-Smith has made big bucks during his time with the NBA.

Each season, his salary has continued to increase, and it is very likely we could see him become one of the highest-paid athletes in the world if he keeps playing as well as he has.

Playing for one of the richest NBA teams has a lot of perks, and Finney-Smith’s steadily growing salary is one of them.

As he continues playing with the NBA, it is very likely we will see him earning a huge salary in the future, especially if he remains with the Mavericks.

He is currently in a relationship with Jazmyne Branch, who he has his son Aysen with, though the couple hasn’t released much info about how long they’ve been together.

Finney-Smith often posts photos of his kids on his official Instagram account, as well as photos from his games and training sessions.

He is also active on his official Twitter account, where he talks about the NBA, interacts with fans, and posts about his upcoming and previous games.

Like Devin Booker and Kyle Lowry, Dorian Finney-Smith has achieved a lot during his career that has helped him become successful.

We’ve chosen to highlight the greatest honors and accomplishments of his career and the ones that have held the most prestige.

Here are some of Dorian Finney-Smith’s most important career awards and achievements:

He may not be as decorated as Paul George, but Dorian Finney-Smith has done very well for himself during his career.

We definitely expect to see him earn many more accolades as he continues in the NBA as one of the Dallas Mavericks’ best power forwards.

How Does Dorian Finney-Smith Spend His Money?

In 2022, Finney-Smith added a two-year-old horse named Stevie to his family. Along with being one of the most expensive pets in the world, Dorian bought the horse in order to practice equestrian sports.

He bought the horse from his dog trainer after re-signing with the Dallas Mavericks, and we’re interested to see how far he’s going to take his newfound hobby.

It’s possible that Finney-Smith could start earning serious money on the equestrian racing circuit if he is able to invest in more horses.

Of course, buying, maintaining, and training all of them would take millions every year if he decided to go that route.

Dorian Finney-Smith has enjoyed a highly successful career as a member of the Dallas Mavericks, and his time on the court hasn’t been lacking in memorable moments.

However, we’ve chosen to highlight some of his most impressive milestones and the ones that have helped his career progress the most.

Here are some of the best highlights of Dorian Finney-Smith’s career:

Dorian Finney-Smith has enjoyed many milestones during his career, and these are only a few of the most significant ones that have paved the way for his success.

Like fellow power forward Julius Randle, we expect to see Finney-Smith accomplish much more as his career progresses.

There is a lot that we can learn from Dorian Finney-Smith and his career as a professional basketball player with the NBA.

Now that you know all about Dorian Finney-Smith’s net worth, we can take a closer look at what he can teach us about reaching our own goals.

Here are some of the best success lessons to learn from Dorian Finney-Smith:

While you can try to do everything on your own, it is easy to become overwhelmed if you don’t have any help.

Surrounding yourself with people who can help you get ahead is not only important for preventing burnout, but it can also give you the means to compensate for your own weaknesses.

2. Consistently Work On Your Skills

You should never stop working on your skills, no matter how talented you think you are because there is always room for improvement.

Consistently working on your skills can also prevent you from getting rusty, especially when it comes to skills you may not use a lot.

3. Don’t Let Failure Hold You Back

Everyone fails, but learning how to deal with failure as an ambitious individual is extremely important if you want to get ahead.

How you carry on from a failure matters much more than the failure itself, and if you’re not able to pick yourself back up, you’ll never be able to make progress.

Dorian Finney-Smith is one of the best power forwards in the NBA, and his skills on the court have made him incredibly wealthy.

So far, he has no plans to leave the NBA, and we expect to see him continue to play for many more seasons, building his legacy and his net worth.

Make sure to check back often so you won’t miss any important updates impacting Finney-Smith’s ongoing career and increasing fortune.

As of February 2023, Dorian Finney-Smith’s net worth is estimated to be $12 Million.

What do you think about Dorian Finney-Smith’s net worth? Leave a comment below.