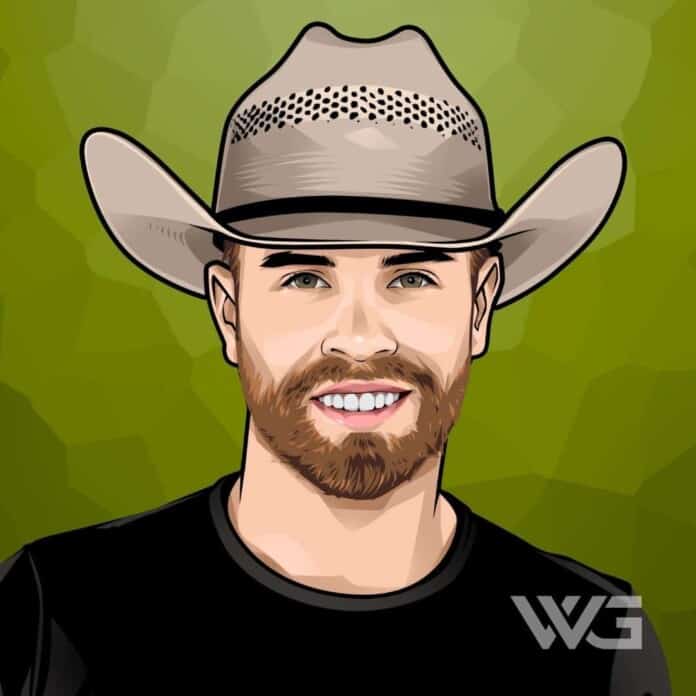 What is Dustin Lynch’s net worth?

Dustin Lynch is an American country music singer and songwriter.

Lynch began playing the guitar when he was around 8 or 9 years old. He then abandoned it and then picked it up when he was 15 years old.

As of December 2022, Dustin Lynch’s net worth is estimated to be $6 Million.

Dustin Charles Lynch was born on the 14th of May, 1985, in Tullahoma, Tennessee.

Although Lynch said he was interested in going to medical school, he decided to pursue a career in music. Lynch said he started playing guitar when he was around 8 or 9 but soon abandoned it, and then picked it up again at 15.

Lynch was first signed to Valory Music Group, and when one of its executives left to join Broken Bow Records, Lynch followed and signed with Broken Bow Records in late 2011. He released his debut single, ‘Cowboys and Angels’ in January 2012.

In early 2014, he released his fourth single and the lead single from his second album, ‘Where It’s At (Yep, Yep)’. It became his first number-one single on the Country Airplay chart in September 2014.

In 2016, ‘Seein’ Red’ was released as the lead single from his third album, ‘Current Mood’. He then released ‘I’d Be Jealous Too’ on the 23rd of October.

Lynch made an appearance at the Macy’s Thanksgiving Day Parade in 2017, performing his hit single ‘Small Town Boy’. The following year, he was inducted into the Grand Ole Opry.

As of December 2022, Dustin Lynch’s net worth is estimated to be roughly $6 Million.

Here are some of the best highlights of Dustin Lynch’s career:

“I’m a crazy dude with a crazy dream. It’s always been my dream to write songs and sing those songs on stage, and I’ve been blessed to have success doing that for the past decade here in Nashville. Originally, I’m from around an hour south of Nashville – our claim to fame there is that we make Jack Daniels.” – Dustin Lynch

“Growing up I was a fan of Batman, Spiderman, and Ninja Turtles – but my other superheroes were Garth Brooks and Alan Jackson and they really were superhuman to me. I would watch whatever I could, whether that was concerts on TV, award shows, The Opry – I’d see those guys and want to be them.” – Dustin Lynch

“Mind-blowing! The Grand Ole Opry is the greatest stage on earth for a country singer and being invited to be a member of that family was at the very top of my career bucket list. For that to happen so early on in my life is a little bit crazy, but it’s something that I cherish because I can enjoy it for many more years that I’m here.” – Dustin Lynch

“Day by day, I want to get better as a songwriter and singer. God knows I need help being a better dancer! But every day is just about improving my craft and my passion. In the next few years, my goal is to reach that headline status.” – Dustin Lynch

“Mom and sister played piano growing up; my grandma still plays piano in church. They always beat me over the head trying to get me to play piano, but I was more interested in riding dirt bikes and playing in the mud.” – Dustin Lynch

Now that you know all about Dustin Lynch’s net worth, and how he achieved success; let’s take a look at some of the strongest lessons we can learn from him:

No one can give you your goals. No one can dig for you. This is your journey.

Loving ourselves allows us to show up in the world so we can love others, uplift others, and make the world a more loving place.

How much is Dustin Lynch worth?

Dustin Lynch’s net worth is estimated to be $6 Million.

How old is Dustin Lynch?

How tall is Dustin Lynch?

Dustin Lynch broke into the Nashville mainstream in 2012 with his chart-topping eponymous debut, which introduced fans to his slick and catchy bro-country style.

Over the coming years, he began to blend his rural tones with more R&B and pop elements, and was rewarded with a string of hits in the middle part of the decade including ‘Where It’s At (Yep Yep)’ and ‘Small Town Boy.’

As of December 2022, Dustin Lynch’s net worth is approximately $6 Million.

What do you think about Dustin Lynch’s net worth? Leave a comment below.