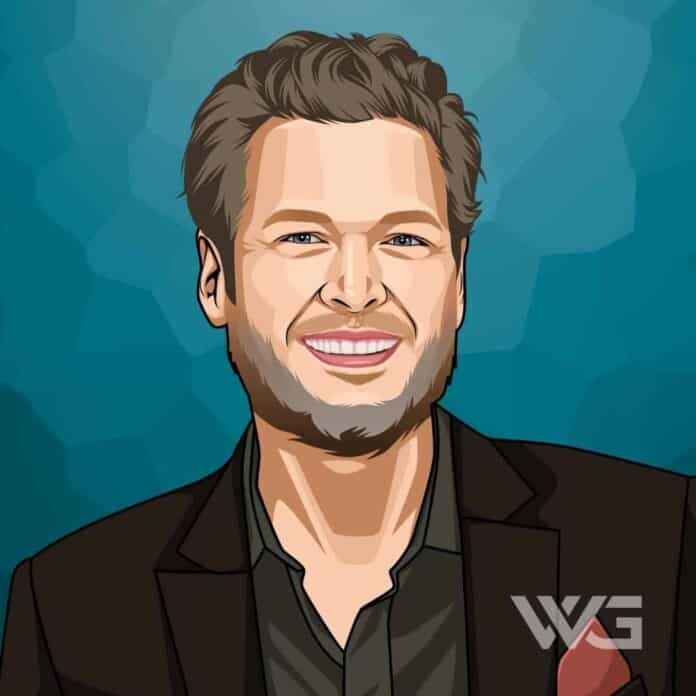 What is Blake Shelton’s net worth?

Blake Shelton is an American country singer and television personality from Oklahoma.

In 2001, he made his debut with the single “Austin”. The lead-off single from his self-titled debut album, “Austin” spent five weeks at number one on the Billboard Hot Country Songs chart.

Blake Shelton was born on the 18th of June, 1976, in Ada, Oklahoma, to Dorothy, a beauty salon owner, and Richard Shelton, a used car salesman.

By age 16, he had received a Denbo Diamond Award in his home state. On November 13, 1990, his older brother Richie Shelton (who was 24) was killed in an automobile accident.

After graduating from high school in 1994, Blake Shelton decided to pursue a full-time career in singing and songwriting. He wrote and sold songs to several music publishing houses. Soon, he landed a solo recording contract with ‘Giant Records.’

In 2004, he released his third album ‘Blake Shelton’s Barn & Grill.’ With singles such as ‘Some Beach’ and ‘Nobody but Me,’ the album did fairly well, and peaked at the 20th position on the ‘US Billboard 200.’

Shelton’s tenth album ‘If I am Honest’ was released in May 2016. Debuting at number three on the ‘US Billboard 200,’ the album went on to become a massive success. It sold 153,000 copies within the first week of its release.

Here are some of the best highlights of Blake Shelton’s career:

“I love to deer hunt and fish and drive down the back roads in my truck. All those things basically equal freedom to me – and not having to return that message or call from my record company or management. At some point, I need to recharge.” – Blake Shelton

“When things go wrong or don’t turn out the way you pictured them in your head, you just have to go with the best intentions defense. I have a lot of good intentions.” – Blake Shelton

“Don’t waste your time lookin’ over your shoulder; those loves from the past ain’t getting’ no closer. When I look in my future, you’re all I can see, so honey, don’t go lovin’ on nobody but me.” – Blake Shelton

“Ironically, being a coach on ‘The Voice’ and spending time with those kids, Xenia and Dia especially, I learned a lot about myself. It reminded me how lucky I am that this happened for me, and it kind of lit the spark inside me again for my love of music.” – Blake Shelton

Now that you know all about Blake Shelton’s net worth, and how he achieved success; let’s take a look at some of the lessons we can learn from him:

Take chances, make mistakes. That’s how you grow. Pain nourishes your courage. You have to fail in order to practice being brave.

The more difficult the victory, the greater the happiness in winning.

If you fail to prepare, you’re prepared to fail.

How much is Blake Shelton worth?

Blake Shelton’s net worth is estimated to be $100 Million.

How old is Blake Shelton?

How tall is Blake Shelton?

Blake Shelton is a well-known American singer-songwriter and TV personality.

Having released a total of 11 studio albums to date, he is one of the most successful singers in contemporary America. For his brilliant performances in the field of music and his work on television, he has received numerous awards and nominations.

What do you think about Blake Shelton’s net worth? Leave a comment below.