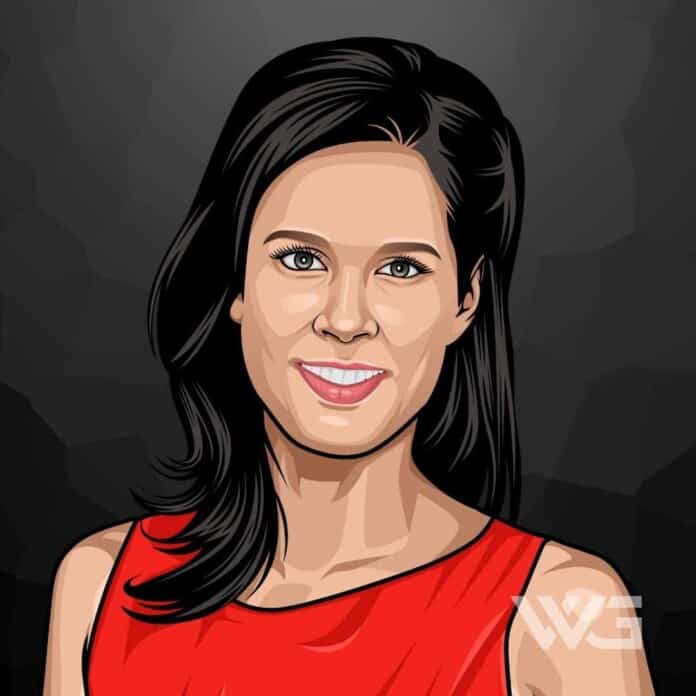 What is Erin Burnett’s net worth?

Erin Burnett is an American news anchor. Burnett currently works as the anchor of Erin Burnett Outfront on CNN.

She has also appeared on NBC’s Meet the Press’, ‘Today,’ ‘Morning Joe’, and ‘NBC Nightly News.’ Burnett has hosted ‘Erin Burnett OutFront live’ from the border of Israel, Rwanda, The United Arab Emirates, and Mali.

She was hired to host the series ‘Street Signs’ and ‘Squawk on the Street’. Both shows were improved when she was the host. She has also appeared on NBC’s Apprentice’ as an advisor to host Donald Trump.

Erin Isabelle Burnett was born on the 2nd of July, 1976, in Maryland.

Burnett is the youngest daughter of Esther Margaret and Kenneth King Burnett. She is of Scottish and Irish ancestry. She attended St. Andrew’s School, where she graduated in 1994.

She returned to the school in 2009. Burnett attended Williams College in Williamstown, Massachusetts, where she studied political science and economics.

Burnett started her career as a financial analyst for Goldman Sachs. While working as an investment-banking analyst, Burnett was offered a position at CNN as a writer and booker for CNN’s Moneyline with Stuart Varney, Willow Bay, and Lou Dobbs.

Following Citigroup, she joined Bloomberg Television as Stocks Editor and anchor. Between 2005 to 2011, Burnett was the host of CNBC’s Street Signs and co-anchor of Squawk on the Street with Mark Haines’.

In 2010, Burnett presented a report on chemical giant Transammonia doing business in Iran.

Later that year, as a result of the CNBC report, Transammonia sent a press release to congressional leaders stating that Transammonia’s Swiss subsidiary would not enter into new contracts with Iranian companies and wind down its business with Iran.

How Does Erin Burnett Spend Her Money?

Erin Burnett lives in a beautiful home in New York, and it’s located near Central Park.

Burnett owns an amazing home in New York City. The building is located near the Lincoln Center and is only a block away from Central Park. Her home comes with two bedrooms, two bathrooms. The apartment features a marble bath, a breakfast bar, and a spacious master bedroom.

Here are some of the best highlights of Erin Burnett’s career:

“You’ve done six interviews this the past four hours, ‘Bizarre’ was a word that some White House officials were using to describe some of your interviews. ‘Nuts’ is another one.… I reached out to a Trump ally. This person told me … ‘you’re drunk or off your meds.’ At least half a dozen other CNN reporters have received similar messages. Is this a hit job or is something wrong?” – Erin Burnett

“I don’t know, you’ll have to ask him that question. Look, I hope he’s fine because I think it would be a shame. What he’s saying is these things happen. It’d be nice if he said none of these things did happen. He’s saying these things happen, and therefore I have credibility. And what I’m saying is, I’d rather have them if they didn’t happen. I don’t want somebody who hit somebody in the face with a padlock.” – Erin Burnett

“Trump and I have had a hell of a journey. I hate it to end this way. Oh my God, I hate it … All I can say is count me out. Enough is enough…Maybe I, above all others in this body need to say this: Joe Biden and Kamala Harris are lawfully elected.” – Erin Burnett

Now that you know all about Erin Burnett’s net worth and how she achieved success; let’s take a look at some of the lessons we can learn from her:

2. Be Flexible With Your Goals

Life happens. Plans change. Stick to your goals as best you can but be prepared to revise and update as needed.

3. You Learn How To Push Yourself

You will not always succeed. But the trying and the perseverance will make you tougher and more likely to succeed in the future.

How much is Erin Burnett worth?

Erin Burnett’s net worth is estimated to be $20 Million.

How old is Erin Burnett?

How tall is Erin Burnett?

Erin Burnett is an American news anchor who began her professional career working for Goldman Sachs in the mergers and acquisitions division.

She was subsequently offered a position on CNN.  Burnett became the Vice President of Citigroup after leaving the show. Burnett is also known for later hosting the show ‘Bloomberg on the Markets.’ Burnett married Citigroup executive David Rubulotta in 2012.

What do you think about Erin Burnett’s net worth? Leave a comment below.