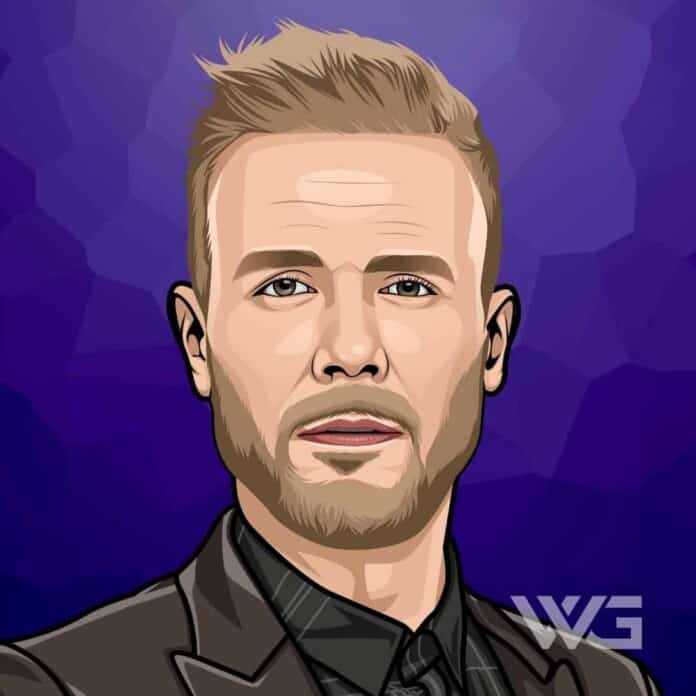 What is Gary Barlow’s net worth?

Barlow is the lead singer of the British pop group, Take That. He is one of the United Kingdom’s most successful songwriters. He has written 14 number one singles.

Barlow is the second son of Colin and Marjorie Barlow. He attended Weaver Vale Primary School and moved on to Frodsham High School in 1982.

Barlow started to love music at an early age. He was influenced by late 1970s and 1980s pop music. Barlow cites watching a performance of “Just Can’t Get Enough” by Depeche Mode on Top of the Pops when he was 10 years old as the main influence.

Barlow is a prolific songwriter who was even voted the greatest British songwriter of all time, beating out both John Lennon and Paul McCartney.

Throughout his career, he has written many songs with other artists as well.  Barlow has written for fellow Take That member Robbie Williams, Elton John, Lily Allen, and many more.

The Queen of England asked him to co-write a song for her diamond jubilee and Andrew Lloyd Weber. He was hired to be the main judge on The X Factor UK for the show’s eighth, ninth and tenth seasons.

As of today, he has been nominated for dozens of music industry awards. Barlow has won five Ivor Novello Awards for songwriting. He has sold over 50 million albums around the world during his career. In 2012, Barlow was nominated into the Order of the British Empire for his contribution to music and art.

How Does Gary Barlow Spend His Money?

Gary Barlow spends some of his money on real estate and lavish cars.

Here are some of the best highlights of Gary Barlow’s career:

“It wasn’t not being famous anymore, or even not being a recording artist. It had nobody who needed me, no phones ringing, nothing to do. Because I’m still too young to do anything. I was only 24 when all that happened. Now, at 40, I feel I’ve got more to give than I ever have.” – Gary Barlow

“We are constantly reminding them that they compete. I had a word with all my contestants, and I know Kelly Rowland had a word with hers. It’s reality check time.” – Gary Barlow

“The trouble with the artists this year is they are all obsessed with Twitter and headlines. It feels like they are all getting a bit above themselves.” – Gary Barlow

“Thank God, I’ve got a great label and a great history. I said to David, ‘Listen, I’ve got an idea: it’s no good me just doing a demo, I need to book a studio, so give me a bit of cash. Let me make two songs and, if we think they’re good, I’ll make the rest of it’.” – Gary Barlow

“We gave ourselves away a lot that first time. What this industry breeds, and it’s always something I’ve got to check myself on, is desperation. That feeling of: ‘I’ll do anything.’ Because it’s so desirable, the honey of what we do, it’s so beautiful.” – Gary Barlow

“It’s definitely the most musical I’ve ever allowed myself to be. It’s hard with pop music – I love it and hate it at times – because it makes you as blunt and as simple as you can be, and I’ve not been that at all on this album. I’m very proud of the recordings – the players were off the scale, and it was a lot of fun to make.” – Gary Barlow

Now that you know all about Gary Barlow’s net worth and how he achieved success; let’s take a look at some of the lessons we can learn from him:

The most effective way to do it is to do it.

Start where you are. Use what you have. Do what you can.

How much is Gary Barlow worth?

Gary Barlow’s net worth is estimated to be $125 Million.

How old is Gary Barlow?

How tall is Gary Barlow?

Gary Barlow is a British musician. Barlow was born in Frodsham, Cheshire, England.

He is a well-known singer, songwriter, pianist, and producer. Barlow has received recognition and fame as both the primary vocalist for the band, Takes That and for his solo work.

He is a prolific songwriter who was even voted the greatest British songwriter of all time.

What do you think about Gary Barlow’s net worth? Leave a comment below.