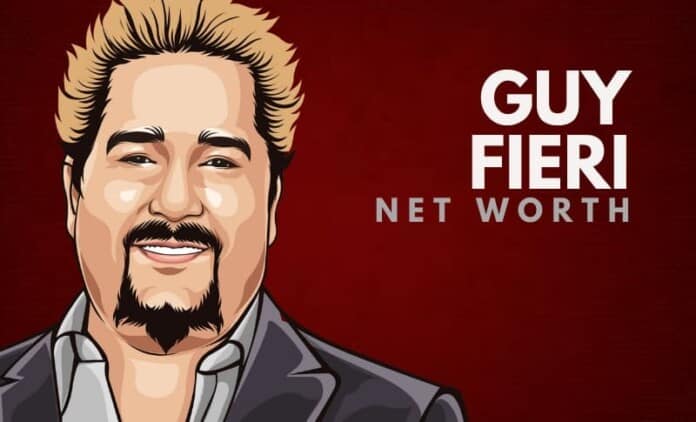 What is Guy Fieri’s net worth?

As of November 2022, Guy Fieri’s net worth is estimated to be roughly $50 Million.

Guy Fieri is an American restaurateur, author, game show host, and an Emmy Award-winning television personality from Ohio. He is known for hosting various television series on the Food Network.

Guy Ramsay Fieri was born on the 22nd of January 1968, in Columbus, Ohio. Fieri is the son of Lewis James Ferry and Penelope Anne Price.

Fieri was drawn towards food as a child and started charting a roadmap for becoming an acclaimed restaurateur in the future. His father extended full support for constructing a special cart for ferrying and selling pretzels when he was just 10.

Guy Fieri had six years of professional experience behind him when he made up his mind to open a restaurant along with Steve Gruber, his business associate.

Towards the end of 1996, he and his business partner started, ‘Johnny Garlic’s’ in Santa Rosa, California followed by two more in Windsor and Petaluma, in 1999 and 2000 respectively.

The ‘California Pasta Grill’ address in Petaluma downed its shutters subsequently and in 2008, they opened their fourth restaurant in Roseville.

The business partners opened a ‘Johnny Garlic’s’ restaurant in a new avatar in 2011 in Dublin, California. Fieri took the initiative of opening a diner in New York City, a risky move, considering the fact that Big Apple was the most competitive market for restaurants in the US.

He named the restaurant, ‘Guy’s American Kitchen and Bar’ that threw open its doors in New York City, in 2012. The restaurant received negative press reviews with the New York Times scathingly criticizing the restaurant’s opening.

Fieri decided to close his New York City restaurant by 2017 end, even though the diner featured on the ‘top 100 independent restaurants’ in the Restaurant Business’s listing in terms of sales.

Here are some of the best highlights of Guy Fieri’s career:

“If you’re cooking and not making mistakes, you’re not playing outside your safety zone. I don’t expect it all to be good. I have fat dogs because I scrap that stuff out the back door.” – Guy Fieri

“I’m a five-seasons griller… I don’t care what the weather is like. My hair is impervious to any kind of dampness, so I don’t have too much to worry about.” – Guy Fieri

“Kids want to saute, to cut the pizza, to see how the ingredients come together. If you let them do the fun stuff, they’ll develop skills and interests that will stay with them forever.” – Guy Fieri

“When cooking for a big crew of hungry dudes who’ve been sleeping in a parking lot, do not think you can get away with fettucini Alfredo.” – Guy Fieri

Now that you know all about Guy Fieri’s net worth, and how he achieved success; let’s take a look at some of the best lessons we can learn from him:

No matter how tough the meat may be, it’s going to be tender if you slice it thin enough.

You don’t have to eat a whole cheeseburger, just take a piece of the cheeseburger. If you just taste the burger you will still feel how tender and well cooked it is.

3. Don’t Ever Use Lighter Fluid

If you’ve bought this book, you are inherently none of those three things, so let’s make sure to teach others the correct way that real pitmasters start a fire. The lighter fluid makes your food taste like crap and is bad for the environment.”

How much is Guy Fieri worth?

Guy Fieri’s net worth is estimated to be $50 Million.

How old is Guy Fieri?

How tall is Guy Fieri?

Guy Fieri is a man of many talents; he is a restaurateur, author, game show host, and television personality. After earning recognition as a restaurateur, he attempted to make his presence felt in the small screen segment of the entertainment industry.

As of November 2022, Guy Fieri’s net worth is estimated to be roughly $50 Million.

What do you think about Guy Fieri’s net worth? Leave a comment below.