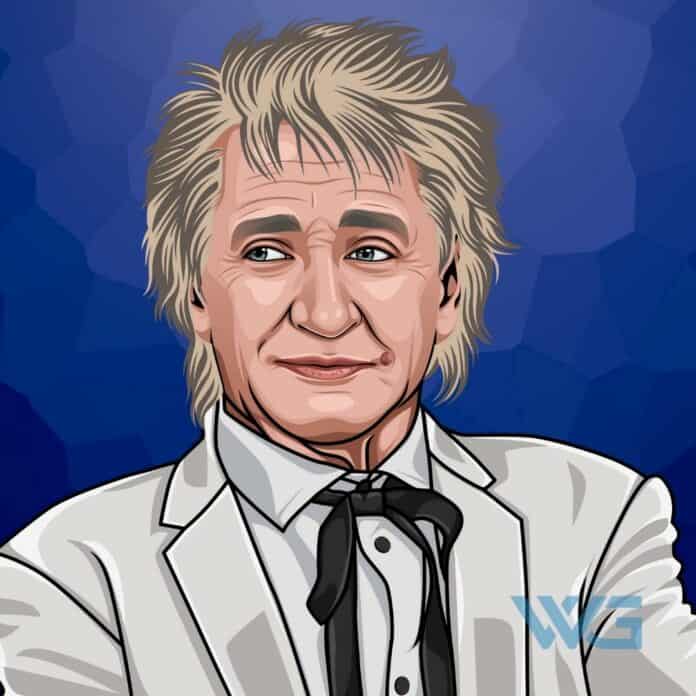 What is Rod Stewart’s net worth?

Rod Stewart is an English singer-songwriter who has sold over 120 million albums throughout his career.

Working as a solo artist and member of the band Faces, he has performed live to some of the biggest crowds in music history while collaborating with many leading artists.

While working in the family shop in the early 1960s, Stewart began listening to Bob Dylan and began singing himself, taking inspiration from Mick Jagger after seeing The Rolling Stones performing live.

By the mid-1960s, Rod Stewart’s professional music career took off with his early work and image as “Rod the Mod,” which he earned due to his dress style.

After performing with the Jeff Beck Group in the late 1960s, Stewart signed a solo artist contract with Mercury Records and became the singer for The Small Faces.

Rod Stewart’s career broke through into the mainstream when he moved to Los Angeles in 1975 and released the album Animal Crossing, placing the singer on the Billboard album charts.

At the height of his fame in the 1980s, he collaborated with artists including Sting and Bryan Adams on the song, All For Love, with many hit solo albums and singles to his credit.

With a career spanning many decades, Rod Stewart continues to perform and record music to this date, collaborating with the latest stars such as Robbie Williams on a new recording of It Takes Two.

As one of the richest singers in the world, Rod Stewart continues to draw in an impressive annual salary for his royalties and new projects.

Rod Stewart’s net worth has continued to rise year-on-year, making him one of the richest rockstars in the world, with no signs of slowing down any time soon.

Here’s a breakdown of Rod Stewart’s annual net worth:

Rod Stewart has been romantically linked to some of the richest models in the world, including Britt Ekland, Rachel Hunter, and Kelly Emberg.

His diagnosis with cancer led Stewart to help raise funds for the City of Hope Foundation, which seeks to find a cure for cancer.

Through his official Instagram account, he keeps his millions of followers up to date on his latest musical endeavors and upcoming live shows.

With a career beginning in the 1960s and continuing to the present day, Rod Stewart has been recognized for his achievements on many occasions.

Here are some examples of the awards and achievements from Rod Stewart’s career:

Stewart continues to perform live and work with other artists, so we can expect him to pick up more awards as his career continues to evolve.

How Does Rod Stewart Spend His Money?

Rod Stewart’s vast net worth and income have allowed him to invest in some of the most expensive houses in the world, with the star owning many multi-million dollar homes.

In addition to several estates in the United Kingdom, Stewart owns an oceanfront house in Palm Beach, Florida, and a mansion in Beverly Park worth an estimated $60 million.

An avid car collector with some of the most expensive cars in the world in his collection, he owns a 400 Ferrari Enzo and a Porsche, in addition to many other sportscars.

Rod Stewart’s career has seen the popular singer enjoy many high points and successes as a solo artist and in collaboration with others.

Here are some of the best highlights of Rod Stewart’s career:

With Stewart’s popularity showing no signs of diminishing, more high points and successes are anticipated as he continues to write and perform music.

Rod Stewart’s outstanding career in the British music industry means he has plenty of insights to say about music and the nature of performance.

Here are our favorite quotes from Rod Stewart:

Now that you know all about Rod Stewart’s net worth, we’ll take a look at some of the amazing lessons on life and success we can learn from Stewart’s impressive career.

Here are some of the best success lessons to learn from Rod Stewart:

1. Always Be Grateful For What You Have

Rod Stewart has recalled his life growing up as a child and his mother’s insistence he eats all the food on his plate.

He’s taken on board the experiences of her struggles to provide food during the war and believes you should always be grateful for what you have.

2. Inspiration Can Come When You Least Expect It

Creative blocks can come at any time, but inspiration works similarly and can arise when you least expect it.

Stewart has talked about getting inspiration in the middle of the night, waking up to write down new lyrics.

3. Be Shrewd With Your Finances.

Discussing his father in an interview, Stewart reflected on how important he believed it was to look after your finances and make shrewd decisions, even if he is sometimes called “tight” with his money.

That concludes this overview of the life and career of Rod Stewart, covering the successful singles and albums that help him earn his vast net worth.

With a career spanning several decades, Stewart remains active today, and his net worth looks set to continue to rise in the future.

Check back on this article to get the latest information on his music releases and new revenue streams.

What do you think about Rod Stewart’s net worth? Leave a comment below.