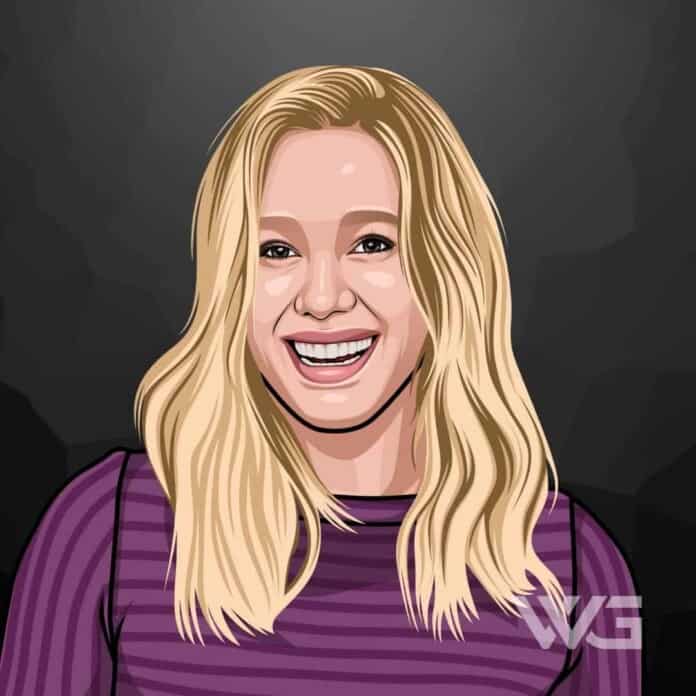 What is Hilary Duff’s net worth?

Hilary Duff is an American actress and singer.

Duff began her acting career at a young age and quickly became a teen idol as the title character of the television series ‘Lixxie McGuire’ in the theatrical film based on the series, ‘The Lizzie McGuire Movie’ in 2003. She has appeared in numerous films in ‘Cadet Kelly,’ ‘Agent Cody Banks,’ ‘Cheaper by the Dozen,’ ‘A Cinderella Story’ and ‘Cheaper by the Dozen 2’.

Hilary Erhard Duff was born on the 28th of September, 1987, in Houston. Both Hilary and her sister Haylie enrolled in singing, acting, and ballet classes. The sisters moved to Los Angeles with their mother. They quickly joined the audition circuit and eventually landed many commercials between the two of them.

In 1997, Duff landed a minor role in the series ‘True Women’. The following year, she landed her first major starring role in the movie ‘Casper Meets Wendy’.

In 2001, Duff premiered in the title role of the show that would make her a household name in the series ‘Lizzie McGuire’. She would go on the appear in 65 episodes of the series. In 2003, she appeared in the theatrical film version of the show. In August 2019, it was announced that Hilary would executive produce a reboot of the series for Disney +.

During the show’s run, Disney earned more than $100 million from merchandise sales alone. Duff earned $15,000 per episode of Lizzie McGuire, a little under $1 million for the full series.

She earned another $1 million the same year to co-star in ‘Cheaper by the Dozen.’ She would earn $2 million in 2005 to appear in that movie’s sequel.

Duff earned $2.2 million for ‘A Cinderella Story,’ and $2 million apiece for ‘Raise Your Voice,’ ‘The Perfect Man,’ and ‘Material Girls.’

Duff has appeared on many television shows in guest roles, including ‘Gossip Girl,’ ‘Beauty & the Briefcase,’ and ‘Younger.’ She has also appeared in several independent films, including ‘War, Inc,’ ‘According to Greta,’ and ‘Bloodworth.’

How Does Hilary Duff Spend Her Money?

Duff owns cars such as a Porsche 911 Carrera, a Mercedes G Wagon, a Porsche Panamera, and a Range Rover Vogue.

Here are some of the best highlights of Hilary Duff’s career:

“I stopped going to school in the middle of fourth grade. Everyone grows up with the peer pressure, and kids being mean to each other in school. I think that’s such a horrible thing, but I never really dealt with it in a high school way.” – Hilary Duff

“I always feel like I’m in the five- to 10-pound struggle, but my life is so busy. I’m just not that concerned, really. I’m normal and I’m perfectly happy being that way. Some weeks I’m like, ‘Man, my clothes are fitting so good,’ and then some weeks, I’m, like, ‘I need to cut back on a few things,’ but that’s it. I don’t fall into the trap of having to be 110 pounds.” – Hilary Duff

“So what are you suggesting?” Grandfather asked. “We find a more acceptable group of people, then bring the Sacrifice to them? How do you propose we find them, a Facebook post? ‘Click here to apply for eternal life’?” – Hilary Duff

“I’d seen Sage bleed. I’d made Sage bleed. Not that it hurt him any; he healed so quickly…In smaller doses it has incredible healing powers. Ben’s voice rang out in my head. I remembered he said that earlier, about…the Elixir of Life.The crackpot, completely bogus, absolutely insane Elixir of Life.” – Hilary Duff

Now that you know all about Hilary Duff’s net worth and how she achieved success; let’s take a look at some of the lessons we can learn from her:

If you don’t believe in something, you’ll lose yourself completely.

It’s hard to stay true to yourself and what you want in life when there are so many distractions and so much craziness going on around you.

How much is Hilary Duff worth?

Hilary Duff’s net worth is estimated to be $25 Million.

How old is Hilary Duff?

How tall is Hilary Duff?

Hilary Duff is an American actress and artist who was born in Houston, Texas. Her older sister Haylie Duff would also later become an actress.

What do you think about Hilary Duff’s net worth? Leave a comment below.