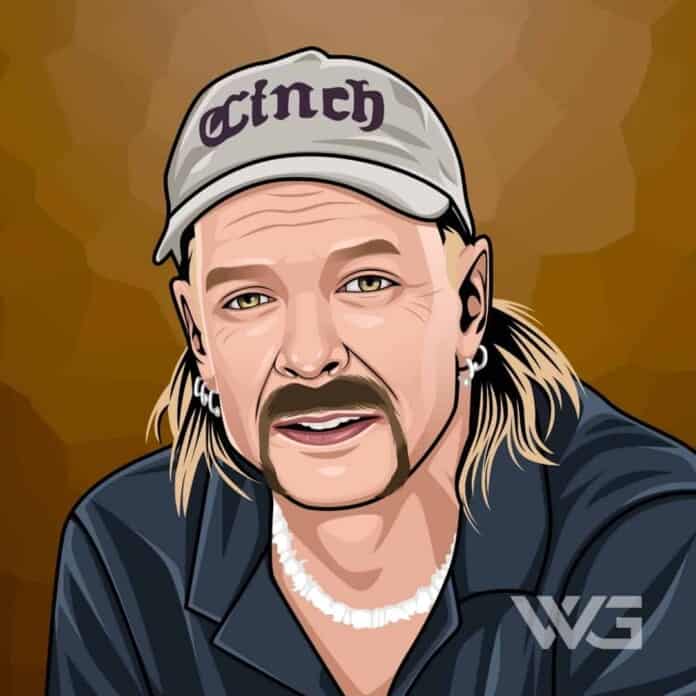 What is Joe Exotic’s net worth?

Joe Exotic has been nicknamed “The Tiger King.”

Exotic is a media personality and felon who operated the Greater Wynnewood Exotic Animal Park from 1998 to 2018. He was born in Texas, and after he graduated from school, he opened a pet store with his brother.

After his brother died, he founded the G.W. Zoo. He held magic shows and cub petting events across the United States.

Joseph Allen Maldonado-Passage was born on the 5th of March, 1963, in Kansas.

Exotic is the son of Francis and Shirley Schreibvogel. He grew up with his siblings Tamara, Pamela, Yarri, and Garold G.W Wayne.

The family moved to Texas, where he enrolled at Pilot Point High School. After he finished school, he joined the Eastvale police department.

He was outed by his brother Yarri, and in response, their father made Exotic shake his hand and promised not to come to his funeral.

Exotic was the owner of the Greater Wynnewood Exotic Animal Park in Wynnewood, Oklahoma, and that is how he rose to fame. He was first a police officer in Eastvale, Texas.

He ran for public office as an Independent from 2016 to 2018 and a Libertarian from 2018 to 2019 before he had his membership revoked. In 2016, Exotic ran for President of the United States. Two years later, he ran for becoming the Governor of Oklahoma.

In 2019, Exotic was convicted on 17 charges of animal abuse and two counts of murder for his role in the plot to kill Carole Baskin. He was later sentenced to a total of 22 years in federal prison for his crimes.

He was previously ordered to pay $1 million to Carole Baskin in a trademark dispute. Baskin was later awarded control of all of his zoo properties as a result.

He was hiding his ownership of the zoos by transferring rights to his mother. Baskin was later able to turn over this transfer. Baskin also got control of several cars and houses of the property.

In 2020, he starred in the Netflix documentary ‘Tiger King: Murder, Mayhem, and Madness’.

Here are some of the best highlights of Joe Exotic’s career:

“For 30 years since the liger has been in existence, everyone thought they were sterile. But we paired a baby liger and a baby white tiger male six years ago and came up with the first tiliger. That proved female ligers weren’t sterile.” – Joe Exotic

“There is nothing wrong with professional pet owners and private breeders of exotic animals. And I would be the first to fight to take away an animal from an irresponsible owner.” – Joe Exotic

“And I’m gonna take it one step further than that, OK? It is time to get on the phone to President Biden or whoever they need to that they’ve got in their little financial pocket and say, ‘Hey, Joe is willing to support a big cat bill to help protect cats in America from being exploited.” – Joe Exotic

“Just about an hour ago, we had an incident where one of the employees sucked their arm through the cage, and the tiger tore her arm off… I can give you your money back, or I can give you a rain check.” – Joe Exotic

Now that you know all about Joe Exotic’s net worth and how he achieved success; let’s take a look at some of the best lessons we can learn from him:

There is nothing wrong with professional pet owners and private breeders of exotic animals.

Animals don’t judge you, as long as you’re really good at heart. They don’t care who you are or what you’ve done in the past.

How much is Joe Exotic worth?

Joe Exotic’s net worth is estimated to be -$1 Million.

How old is Joe Exotic?

How tall is Joe Exotic?

Joe Exotic has shocked the world, and he has made a name for himself. He is now a convicted felon and reality TV personality. Exotic is best known for starring in the Netflix documentary ‘Tiger King: Murder, Mayhem, and Madness’. He was born in Kansas, and he has used the names “The Tiger King,” “Aarron Alex,” and “Cody Ryan.”

What do you think about Joe Exotic’s net worth? Leave a comment below.

What is Luke Combs' net worth? Introduction  As of ,...