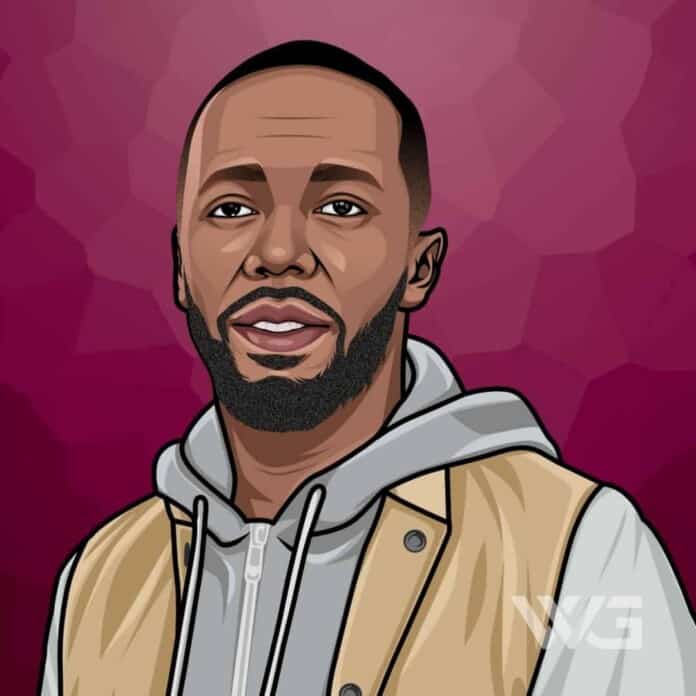 What is Rich Paul’s net worth?

Rich Paul is a sports agent. Paul is based in Cleveland, Ohio.

He is best known for founding Klutch Sports Group which represents an enormous number of NBA players, in addition to NFL players in more recent years. Paul has generated close to $1 billion in deals with athletes.

Paul grew up in a small apartment above his father’s store in Cleveland. His father helped him to enroll in a Roman Catholic high school. In 1999, his father died of cancer.

After he finished high school, he was mentored by Andy Hyman to sell vintage jerseys.

He would sell them out of his truck in Cleveland. In 2002, he met LeBron James, and Paul impressed him with an authentic Warren Moon jersey. They exchanged contact information.

In 2003, Paul joined his friend LeBron James as part of his inner circle with his childhood friends.

He would later start to work under Leon Rose.

In 2012, Paul, along with LeBron, left Rose, and he started his own agency, Klutch Sports Group.

Paul enlisted Mark Termini to run the NBA contract negotiations for Klutch. He ended up negotiating $1.4 billion in NBA contracts for Klutch Sports clients from 2014 to 2019.

Later that year, UTA asked Paul to run its sports division. In 2020, Paul accepted a position on UTA’s board of directors.

NCAA changed its regulations for sports agents, which required them to hold a bachelor’s degree. He later argued in The Atheltic that the rule would prevent people from different backgrounds, people of color, and those without the funds to attend college from working as agents.

In 2020, Paul launched Klutch Conversations. It was launched during the NBA All-Star Weekend with SocialWorks and General Mills to encourage financial literacy among young people. The same year, he was included in the “Ebony Power 100 List”.

As of this year, he was sued by Nerlens Noel on the ground of fiduciary duty, breach of contract, and negligence for his role after turning down a $70 million contract from the Dallas Mavericks.

How Does Rich Paul Spend His Money?

Paul owns a beautiful home in Los Angeles, which he purchased for $4.35 million. It’s a traditional home, and it comes with six bedrooms and five and a half bathrooms.

Here are some of the best highlights of Rich Paul’s career:

“I’ve always had confidence in my capabilities. I’m not new to the business. This is my 18th year being involved in the business of basketball. I made the sacrifice to learn, to be a sponge, and to fail. You have to have a lot of heart to fail—to wake up with doubt and have that drive to want to fail.” – Rich Paul

“They didn’t understand the situation he was in. They didn’t play in the place for however many years and felt as if there was a change needed. A lot of times the people around sports discredit certain things because it is a sport. And growing up, sporting is recreational, all the way up until you get to this point, where it’s a billion-dollar fucking business.” – Rich Paul

“In his case, he seeked to change something in the best way possible. People viewed it a certain way without knowing the facts. But again, that’s television, that’s entertainment, that’s people sitting in the room at 6:00 A.M., saying we’re going to get on TV and say this and say that and create this narrative.” – Rich Paul

“Growing up in the inner city of Glenville, Cleveland, in a poverty-stricken area, you see things, you experience things. I was fortunate enough to not fall in the pitfalls of it all.” – Rich Paul

“I’ve always been a man of mindset. It doesn’t matter where you live—you can have the biggest house, you can have the smallest house. Like, growing up, you would see people who don’t cut their grass.” – Rich Paul

Now that you know all about Rich Paul’s net worth and how he achieved success; let’s take a look at some of the best lessons we can learn from him:

It’s essential to celebrate your wins, even if they are small or big. Life is all about challenges, and if you manage to win, you have to celebrate them.

3. Surround Yourself With the Right People

How much is Rich Paul worth?

Rich Paul’s net worth is estimated to be $120 Million.

How old is Rich Paul?

How tall is Rich Paul?

Rich Paul has represented some of the biggest names in basketball, including LeBron James.

He is one of the biggest names in the industry. Paul manages over 20 NBA players, and he is one of the most potent agents in the world of sports without a doubt. He has definitely made a name for himself.

What do you think about Rich Paul’s net worth? Leave a comment below.