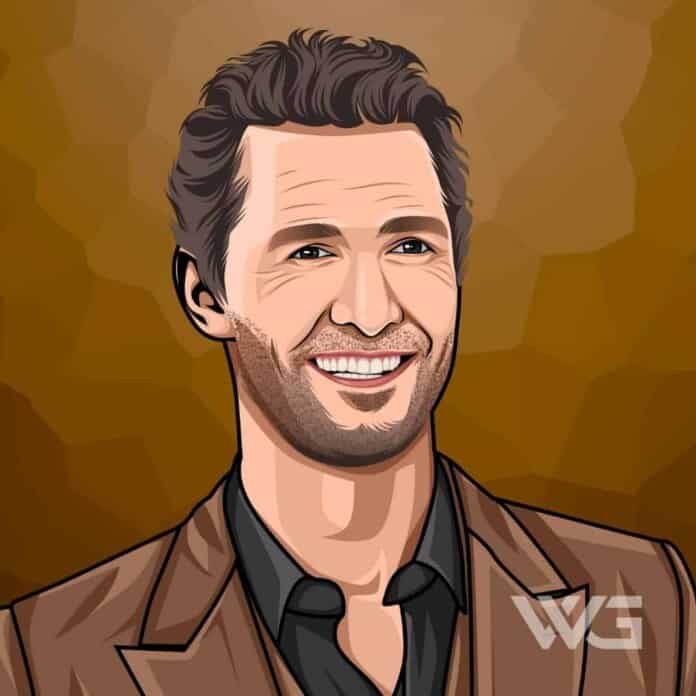 What is Matthew McConaughey’s net worth?

Matthew McConaughey is one of the most iconic actors in the world.

McConaughey first rose to fame for his performance in the movie ‘Dazed and Confused’ in 1993. Many have considered this movie to be one of his breakout roles.

After several supporting roles in movies such as ‘Angels in the Outfield’ and ‘Texas Chainsaw Massacre: The Next Generation,’ his big breakthrough came as the leading man in the drama ‘A Time to Kill’ in 1996.

Matthew David McConaughey was born on the 4th of November, 1969, in Uvalde, Texas.

McConaughey was raised by his mother who was a former teacher. His father was involved in the oil industry. His parents divorced two times before they remarried. He has two brothers.

During his time in high school, McConaughey lived in Australia for a year as part of an exchange program. In 1993, he graduated from college and earned a Bachelor of Science in radio, television, and film.

He ultimately went into acting.

His big break came in 1993, with his supporting role in ‘Dazed and Confused.’ This role made him a fan favorite, and his line “All right, all right” has become one of his iconic quote moments in pop culture.

He followed this up with smaller supporting roles in films such as ‘Angels in the Outfield,’ ‘Texas Chainsaw Massacre: The Next Generation,’ and ‘Boys on the Side.’ He rose to fame with his role in ‘A Time to Kill.’

In 1998, he appeared in the movie ‘The Newton Boys.’ The film was about a group of brothers from Ulvade who became bank robbers. It generated over $10 million on a $27 million budget.

During the 2000s, his work was dominated by romantic movies. He appeared in a lot of famous movies such as ‘The Wedding Planner,’ ‘Ghosts of Girlfriends Past,’ Fool’s Gold, and ‘Failure to Launch.’

McConaughey had a busy year in 2014, and he also appeared in the sci-fi thriller ‘Interstellar.’ The following year, he appeared in the film ‘The Sea of Trees’. In 2017, he starred in ‘The Dark Tower,’ which received negative reviews. He received praise for his role as a stoner in ‘Beach Bum’ even though the movie was seen as a failure.

As of February 2023, Matthew McConaughey’s net worth is estimated to be roughly $160 Million.

How Does Matthew McConaughey Spend His Money?

McConaughey owns an incredible mansion in Austin, Texas. This massive home comes with eight bathrooms and seven bedrooms. It has a massive backyard and a guest house.

Here are some of the best highlights of Matthew McConaughey’s career:

“I do believe in God, but I think it’s very healthy for a believer to spend time in the pragmatism of agnosticism, and I think God appreciates agnostics trying to make a science of it and going, “I will not believe any further than that.” I enjoy that kind of engineering mind. In no way did it ever feel blasphemous to me as a man of faith.” – Matthew McConaughey

“I have some good friends of my own who happen to be gay, and when it comes to gay, straight, or whatever, I’m for anything life-affirmative. I’m for gay power, straight power, male power, female power; everybody should feel empowered without oppressing anyone who’s different.” – Matthew McConaughey

“Now, you lose something in your life, or you come into a conflict, and there’s going to come a time that you’re going to know: There was a reason for that. And at the end of your life, all the things you thought were periods, they turn out to be commas. There was never a full stop in any of it.” – Matthew McConaughey

“I love having my hands in the dirt. It is never a science and always an art. There are no rules. And if it comes down to me versus that weed I’m trying to pull out of the ground that doesn’t want to come out? I know I’ll win.” – Matthew McConaughey

Now that you know all about Matthew McConaughey’s net worth and how he achieved success; let’s take a look at some of the best lessons we can learn from him:

There’s a difference between thinking you are a champion and knowing that you are.

The best advice comes from people who don’t give advice.

How much is Matthew McConaughey worth?

Matthew McConaughey’s net worth is estimated to be $160 Million.

How old is Matthew McConaughey?

Matthew McConaughey was born on November 4, 1969, and is currently 53 years old.

How tall is Matthew McConaughey?

Matthew McConaughey is an American producer and actor known for his breakthrough role in ‘Dazed and Confused.’

Today, he is one of the most iconic and famous actors in Hollywood. He has won multiple awards for his movie performances, both in comedic and dramatic roles.

As of February 2023, Matthew McConaughey’s net worth is estimated to be roughly $160 Million.

What do you think about Matthew McConaughey’s net worth? Leave a comment below.