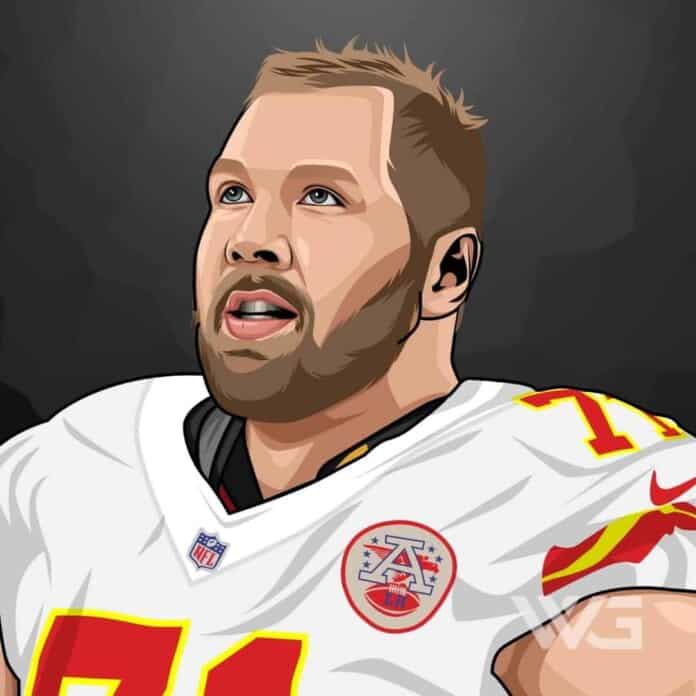 What is Mitchell Schwartz’s net worth?

Mitchell Schwartz is an American football offensive tackle for the Kansas City Chiefs of the NFL.

Schwartz played college football for the University of California, Berkeley’s Golden Bears. He started all 51 games possible from 2008–11, at either left tackle or right tackle.

As of February 2023, Mitchell Schwartz’s net worth is roughly $20 Million.

Mitchell Bryan Schwartz was born on the 8th of June, 1989, in Pacific Palisades, California.

He is the son of Lee Schwartz, a business consultant to manufacturing companies, and Olivia Goodkin, an attorney.

Schwartz is Jewish and was raised in Conservative Judaism. His Hebrew name is Mendel.

He was drafted in the 2nd round by the Cleveland Browns in the 2012 NFL Draft. ESPN’s NFL draft analyst Mel Kiper, Jr. called Schwartz “the key pick” of the draft for the Browns. He was Cal’s highest selection in the 2012 draft, and its first offensive lineman picked in the NFL draft.

Schwartz started all 16 games for the Browns in 2012, and all 1,064 offensive snaps, of his rookie year at right tackle. He was the only Browns rookie, and one of six NFL rookie offensive linemen, to start every game.

In 2015, Schwartz once again for the fourth straight year started all 16 games for the Browns, playing all offensive snaps. Since Schwartz was drafted, in his four years with the Browns, he started every single game at right tackle, without missing one offensive snap.

Here are some of the best highlights of Mitchell Schwartz’s career:

“Getting that done shows a lot. I mean, I had two years left on the deal and typically you’re not always able to work those out because you’re still so far from free agency and they control your terms. I’m really appreciative of them to be receptive to it.” – Mitchell Schwartz

“Obviously we came together and made it work, so I think both sides are pretty happy. I like being here. It’s been an awesome three years and now I’ve got three more so I’m looking forward to those.” – Mitchell Schwartz

“That’s all we’re looking forward to. After that, I’m sure the goal is to win another. You kind of just take things one season at a time. I think just numbers-wise and cap-wise it worked out best to do that. That’s just the best way it worked out.” – Mitchell Schwartz

Now that you know all about Mitchell Schwartz’s net worth, and how he achieved success; let’s take a look at some of the lessons we can learn from him:

1. Strength Comes From Will

Strength does not come from physical capacity. It comes from an indomitable will.

How much is Mitchell Schwartz worth?

Mitchell Schwartz’s net worth is estimated to be $20 Million.

How old is Mitchell Schwartz?

How tall is Mitchell Schwartz?

Mitchell Schwartz is an offensive tackle who became one of the NFL’s highest-paid tackles when he signed a 5-year, $33 million contracts with the Kansas City Chiefs in 2016.

He was named as a second-team All-Pro in each of his two first two seasons with the Chiefs.

As of February 2023, Mitchell Schwartz’s net worth is estimated to be $20 Million.

What do you think about Mitchell Schwartz’s net worth? Leave a comment below.