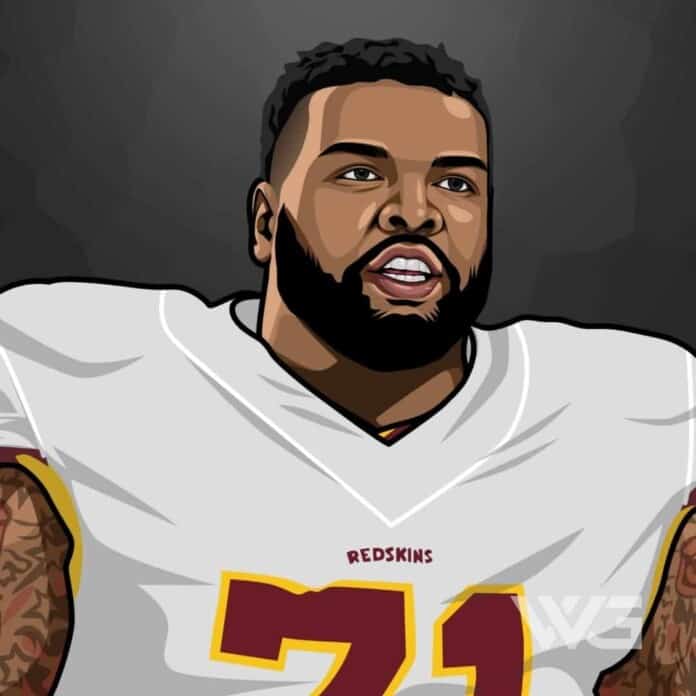 What is Trent Williams’ net worth?

Trent Williams is an American football offensive tackle for the San Francisco 49ers of the NFL.

Williams played college football at Oklahoma, where he was recognized as an All-American and was drafted by the Washington Commanders fourth overall in the first round of the 2010 NFL Draft.

As of February 2023, Trent Williams’ net worth is roughly $14 Million.

Trent Williams was born on the 19th of July, 1988, in Longview, Texas. Williams attended Longview High School, where he played for the Longview Lobos high school football team.

Williams was a unanimous first-team all-district selection as a senior. Longview entered the 2005 UIL playoffs on a 10–0 season record.

Williams was considered one of the best offensive tackles available in the 2010 NFL Draft and drew comparisons to Jammal Brown.

He was drafted fourth overall by the Washington Commanders and agreed to a six-year, $60 million contract on July 30, 2010. In the 2010 season, Williams made his NFL debut in Week 1 against the Dallas Cowboys.

In April 2019, it was reported that Williams had a surgical procedure done to remove a growth from his head that was diagnosed as dermatofibrosarcoma protuberans (DFSP), a type of cancer.

Here are some of the best highlights of Trent Williams’ career:

“If I felt like they were genuine, I’d be all for it. They’re not doing it to find out what went wrong. They’re doing it to cover their butts.” – Trent Williams

“I knew I was coming up on a year with no guaranteed money, and I wanted to open the conversation about them making me a Redskin for the rest of my career. I understand that either a team wants the player and will extend him, or they’ll send him somewhere so they can get some value for him.” – Trent Williams

“I felt like they could have worked something out if they really wanted me. But the breaking point was how things played out with my health and how I felt like I was mistreated. I put this organization first for so long, but they never took it seriously, and I do stand for something, and I felt like it’s not just a stand for me, but for future players as well.” – Trent Williams

“I felt like things could have been resolved, but then the Redskins resorted to the blame game. I stayed quiet about the situation because I want to maintain that level of respect. But there were some details coming out that only a couple people knew.” – Trent Williams

Now that you know all about Trent Williams’ net worth, and how he achieved success; let’s take a look at some of the lessons we can learn from him:

Believe in yourself and never shy away from hard work.

Hard work eliminates fear. That’s how we should think all the time.

In any sport at the top level, if you don’t put in the hard work and keep the show going, you can be sure someone else is. It is a vicious circle.

How much is Trent Williams worth?

Trent Williams’ net worth is estimated to be $14 Million.

How old is Trent Williams?

How tall is Trent Williams?

Trent Williams is an American professional football player who played his college football at the University of Oklahoma where he was a unanimous All-American in 2009 and First-team All-Big 12 in 2008 and 2009.

As of February 2023, Trent Williams’ net worth is approximately $14 Million.

What do you think about Trent Williams’ net worth? Leave a comment below.