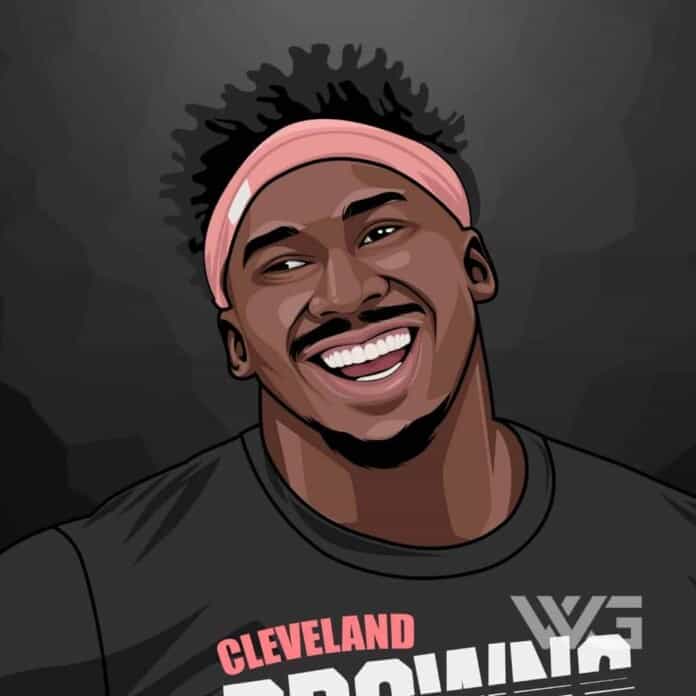 What is Myles Garrett’s net worth?

Myles Garrett is an American football defensive end for the Cleveland Browns of the NFL.

Garrett played college football at Texas A&M and was drafted by the Browns first overall in the 2017 NFL Draft.

Myles Lorenz Garrett was born on the 29th of December, 1995, Texas. Garrett attended Martin High School in Arlington, Texas, where he was a letterman in football, basketball, and track.

Garrett was rated as a five-star recruit by the Rivals.com recruiting network and was ranked as the second-best overall player in his class.

The Cleveland Browns selected Garrett with the first overall pick of the 2017 NFL Draft. Garrett became the highest draft pick from Texas A&M in the history of the NFL draft.

The same year, the Cleveland Browns signed Garrett to a fully guaranteed four-year, $30.41 million contracts that feature a $20.25 million signing bonus, offset language options and a team option for a fifth year.

In Week 1 against the Tennessee Titans, Garrett sacked Marcus Mariota twice in the 13–43 loss. During Monday Night Football against the New York Jets in Week 2, Garrett finished with three sacks but also committed two roughing the passer penalties as the Browns won 23–3.

During the Browns’ November 14 game against the Pittsburgh Steelers, with eight seconds left in the game, Garrett pulled Steelers quarterback Mason Rudolph to the ground and held him thereafter the latter threw a screen pass to running back Trey Edmunds.

Here are some of the best highlights of Myles Garrett’s career:

“Didn’t know how this would play out when I was a kid. I knew I wanted to play ball, be a paleontologist, and write poetry. I thought, ‘Heck, where will I find the time? Well, football comes first, and I’ll just find some time for poetry, and paleontology can come at the end.’ I made this plan at 14, and dang, it’s all coming together.” – Myles Garrett

“After the whistle, during the whistle. Guys try to sneak stuff in. I just have to be uncompliant with stuff like that. Guys feel they can get away with stuff. I have to just try to not get back at him but make sure I finish through him during the whistle and not do anything that can jeopardize the team or that series of downs.” – Myles Garrett

“When I’m doing sports, I don’t feel anything at all. I enjoy the moment. It’s a safe haven. But once you try to let someone inside your soul, you become vulnerable. You have to be comfortable in your own skin. I don’t open myself up like that to a lot of people. It takes courage.” – Myles Garrett

“Just to see how much time is consumed looking down at your phone when you could be reading, becoming better at your own language, or learning a new language – you could be doing so many productive things. You could become a better student-athlete.” – Myles Garrett

Now that you know all about Myles Garrett’s net worth, and how he achieved success; let’s take a look at some of the lessons we can learn from him:

It’s kind of hard with two moves. Garrett feels like it can’t always be so predictable. You can be as strong or fast as you want, but speed-chop and power move aren’t always going to work.

It doesn’t matter if it’s preseason or a scrimmage. Garrett is trying to have a dominant performance, whether it’s preseason first series or whenever he gets out there.

How much is Myles Garrett worth?

Myles Garrett’s net worth is estimated to be $12 Million.

How old is Myles Garrett?

How tall is Myles Garrett?

As of January 2023, Myles Garrett’s net worth is estimated to be roughly $12 Million.

What do you think about Myles Garrett’s net worth? Leave a comment below.