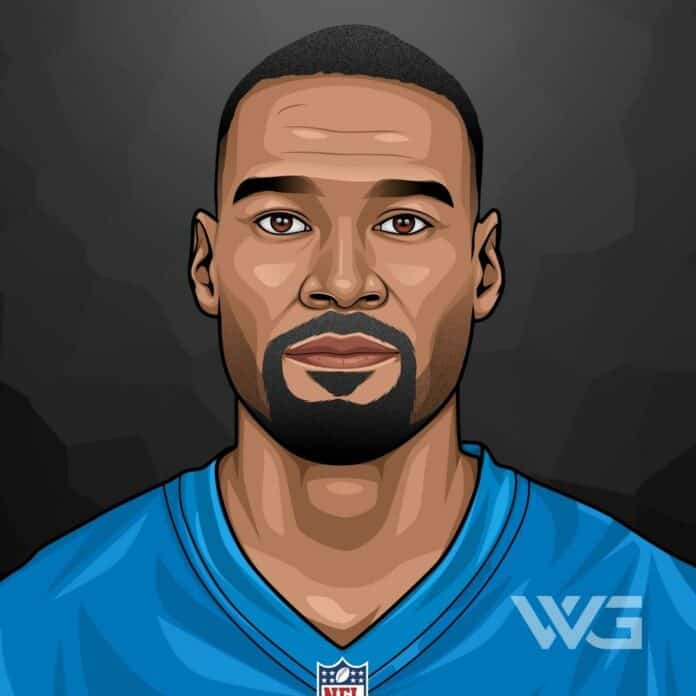 What is Calvin Johnson’s net worth?

Calvin Johnson is known as one of the best wide receivers of all time, with his size and speed making him a force to be reckoned with on the field.

Although Johnson retired in 2015, he’s continued to grow his fortune through other business ventures, including opening his own cannabis dispensary.

As of December 2022, Calvin Johnson’s net worth is estimated to be $45 Million.

As a child, Johnson’s parents pushed him to succeed in school, requiring him to keep A’s and B’s if he wanted to play sports.

By middle school, Calvin was already 6ft tall, growing to be 6ft 4in by his sophomore year in high school.

At Sandy Creek High School, Calvin was a football and baseball standout and was rated in the top 10 of all wide receivers in the nation.

For college, Calvin opted to attend the Georgia Institute of Technology, where he played for the Yellow Jackets football team from 2004 to 2006.

In 2007, Johnson declared himself eligible for the upcoming NFL draft, and he was ultimately chosen by the Detroit Lions in the first round as their second pick.

Calvin Johnson signed a six-year contract with the Detroit Lions in 2007, and while they aren’t one of the richest NFL teams, he became the highest-paid player in the team’s history.

During his first year, he received the nicknames “Megatron” and “Bolt” due to his towering size and impressive speed, which surprised many people.

Johnson played exceptionally well during his first couple of seasons with the Lions, but 2011 was his best statistical season by far.

During 2011, Johnson reached a career-high 1,681 receiving yards and 16 touchdowns and earned third place on the Top 100 NFL Players list.

In 2012, Johnson renewed his contract with the Detroit Lions for eight years and beat out Cam Newton to become the cover athlete for Madden NFL 13.

By the 2013 season, Johnson hit another career high of 329 receiving yards during a single game and earned a place on the Pro Bowl team, though an injury forced him to back out.

Johnson later became the fastest player to achieve 11,000 receiving yards during his 127th game in 2015, and while he was once again nominated to the Pro Bowl, he declined to attend.

In March of 2016, Johnson announced his decision to retire from the NFL, with his overall 5,137 receiving yards being the most earned by any player in a three-year period in NFL history.

While he may not be one of the richest NFL players in the world, Calvin Johnson has accumulated a significant fortune in his nine-season career.

However, since Johnson retired before his eight-year extension expired, he was only guaranteed $53.2 million of his $113.4 million contract.

Although he may not be as rich as Drew Brees or Sam Bradford, Calvin Johnson has certainly earned more than enough to live comfortably.

Calvin Johnson became engaged to his long-time girlfriend Brittney McNorton in 2015, and the couple married a year later, in 2016.

Together they live outside of Detroit with their son C.J., whom Johnson had from a previous relationship.

In 2019, Johnson and Brittney were granted approval to open a medical cannabis dispensary, and he has since launched several facilities across the state of Michigan under the brand name Primativ with his former teammate Rob Sims.

Calvin Johnson has achieved a lot throughout his nine seasons with the NFL.

However, some of his awards have been more prestigious than others.

Here are some of the most noteworthy awards from Calvin Johnson’s career:

While he may not be the most decorated player in the NFL, he has still achieved a lot in just nine seasons, highlighting how impressive his skills on the field are.

How Does Calvin Johnson Spend His Money?

With a fortune like his, Calvin Johnson could easily afford to buy anything he could ever want, and he certainly bought some impressive houses.

While he currently lives just outside of Detroit with his wife, Brittney McNorton, he also owns a home just outside of Atlanta, Georgia, which he listed for $2.1 million in 2018.

Surrounded by three acres of woods, the floor-to-ceiling windows provide spectacular views of the landscape, while outside, a large hot tub is set beside a firepit overlooking the expanse of trees in the backyard.

Although we don’t know much about his home in Michigan, Calvin has stated that it has its own memorabilia room and is only a short walk away from a lake.

Calvin has stated that he’s invested in additional real estate, though exactly where and for how much, he has never said.

Outside of his home, he has put his money towards his foundation that awards athletic scholarships to students and into his two businesses, Locker Room Consulting and Primitiv, a cannabis company.

Calvin Johnson has reached many milestones in his nine-season career that have allowed him to leave a lasting legacy in the NFL.

While all of his achievements have been substantial, some stand out more than others.

Here are some of the best highlights of Calvin Johnson’s career:

Although these are just a few of his most essential highlights, each of them has helped him stand out from every other player on the field.

Calvin Johnson has given many interviews throughout his career, each of which has given fans an insight into who he is as a person and a player.

While he’s said a lot in his nine years with the Lions, some of his quotes have stood out more than others.

Here are our favorite quotes from Calvin Johnson:

There are a lot of great lessons that Calvin Johnson can teach us about becoming successful.

Now that you know all about Calvin Johnson’s net worth, let’s take a look at what he can teach us about reaching our own potential.

Here are some of the best success lessons to learn from Calvin Johnson:

There will always be ups and downs when you’re trying to become successful, but staying positive is essential.

If you’re able to keep a positive attitude, you’ll set yourself up to be much more motivated to keep moving forward instead of setting yourself back with negativity.

It may not seem worthwhile to chase lofty goals, but if you don’t, you’ll never know how far you can truly go.

Don’t be afraid to set your goals high, because even if you don’t reach them, you could end up reaching heights that you never knew were possible.

When trying to become successful, you must not neglect your physical or mental health.

There is no point in becoming successful if you break yourself down in the process, so making time to take care of your needs is essential.

Calvin Johnson is one of the greatest wide receivers of all time, and he has made a small fortune for himself using his talents on the field.

While he has since retired from the gridiron, Johnson has continued growing his net worth with his cannabis business.

Make sure to check back often to stay up-to-date on Calvin Johnson’s net worth as it continues to increase!

As of December 2022, Calvin Johnson’s net worth is estimated to be $45 Million.

What do you think about Calvin Johnson’s net worth? Leave a comment below.