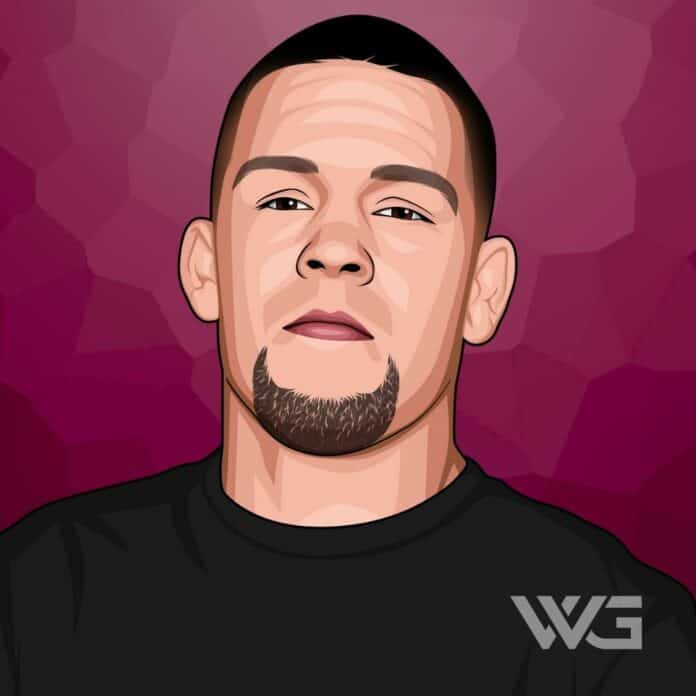 What is Nate Diaz’s net worth?

Nate Diaz is an American mixed martial artist who won The Ultimate Fighter 5 and established a fine career for himself in the UFC.

Prior to winning the reality series, Diaz was with World Extreme Cagefighting and the Warrior Cup.

Nathan Donald Diaz was born April 16, 1985 in Stockton, California and attended high school in nearby Lodi.

He trained in mixed martial arts with his older brother Nick Diaz, who is a fellow UFC fighter and former champion.

Diaz began fighting as a teenager in bare knuckle mixed martial arts and had his first professional match at 19 years old.

In 2005, he’d lose his first fight, but then started a winning streak that put him on the map for good.

He was then selected for the fifth season of The Ultimate Fighter, winning the lightweight tournament on national television.

Though he lost in his only title match (against Benson Henderson), Diaz has had 15 UFC wins, including a memorable one against Conor McGregor at UFC 196.

Even while he was holding the WEC Lightweight Championship, it wasn’t until he signed his UFC contract that Nate Diaz started earning big payouts.

The biggest payout came from when Diaz fought Conor McGregor, as the match was watched by millions worldwide.

Nate and his brother Nick Diaz have established themselves as some of the most notable names in mixed martial arts and earn big payouts as a result.

Though he has dropped recent matches against Leon Edwards and Jorge Masvidal, Diaz is still a big draw.

Nate Diaz has become one of the richest MMA fighters in the world alongside the likes of Khabib Nurmagomedov and Ronda Rousey thanks to his big matches over the years.

Diaz himself has plenty of large payouts and helps to run the Nick Diaz Academy in the Diaz brothers hometown of Stockton, California.

Here’s a breakdown of Nate Diaz’s annual net worth:

Nate Diaz has come a long way from his time at a Brazilian Jiu-Jitsu school, and has plenty of money to fall back on in case of sudden retirement.

For now, there are large paychecks that are still coming his way as he headlines UFC events across the nation.

Nate Diaz was raised alongside brother Nick almost exclusively by their mother Melissa in California prior to the two of them making it to the UFC.

Diaz has been in a relationship with Misty Brown for much of his adult life, and the two are both from Stockton, California.

Along the way, Diaz and Brown have had a daughter, Nikayla, who was born in June 2018, though their marital status isn’t known.

UFC fighter Henry Cejudo has suggested that Diaz could potentially begin a career with the WWE once he gets away from mixed martial arts.

Nate Diaz has been one of the most decorated mixed martial artists in his UFC career, and his bonuses have helped make him incredibly wealthy.

From winning a reality television series to fighting for championships, Diaz has just about done it all in mixed martial arts.

Here are some of the awards and achievements from Nate Diaz’s impressive career:

Nate Diaz is still active in fighting, and is looking to add to his already impressive resume in the future.

He has only had one title shot thus far in his career, and wants to go earn another chance at winning his first championship in the UFC.

How Does Nate Diaz Spend His Money?

As one of the richest fighters, Diaz decided to shop for some of the most expensive cars in the world and has a solid collection.

Among the vehicles that Diaz has been spotted driving around include a Tesla car, a Chevrolet SUV, and a Range Rover.

Diaz was already living in a $430,000 home before he got his big payout for fighting Conor McGregor, and chose to stay there instead of shopping for the most expensive houses in the world afterward.

His house in Stockton, California is around 4,000 square feet and features 2.5 bathrooms, and the Tokay High School graduate has shown no interest in upgrading.

There have been some incredibly memorable moments for Nate Diaz during his career, dating back to even before Diaz beat Rob Emerson in his first match at The Ultimate Fighter 5.

Between winning championships at lower promotions to beating one of the world’s biggest names in Conor McGregor, Diaz has accomplished a lot.

Here are some of the best highlights of Nate Diaz’s career:

Nate Diaz is looking to add some more highlights to his resume, including a possible rubber match against McGregor.

He’s done incredibly well for someone that was simply considered the younger brother of Nick Diaz when he first joined the UFC.

Nate Diaz is one of the biggest draws in the UFC, and is always entertaining when speaking with Joe Rogan in his post-fight interviews.

Along the way, Diaz has had some interesting things to say, especially when he’s talking about his motivation in the UFC.

Here are our favorite quotes from Nate Diaz:

Nate Diaz truly impressed at The Ultimate Fighter 5 and earned a contract from Dana White to start his UFC career.

Along the way, Diaz has learned a lot about life while staying tight-knit with his brother Nick, with the two opening up an academy in their hometown.

Now that you know all about Nate Diaz’s net worth, there’s much to learn from the current UFC fighter and former welterweight champion.

Here are some of the best success lessons to learn from Nate Diaz:

Nate Diaz was already a big name in the UFC, but his biggest payout to date was one that wasn’t even scheduled to include him.

Conor McGregor was originally scheduled to fight Rafael dos Anjos, but a last-minute injury allowed Diaz to take his spot.

Diaz took advantage and ended up winning the match, earning over $5 million by defeating an opponent he wasn’t even training to take on.

On the surface, Nate Diaz is an extremely intense and tough individual, but deep down he really cares about helping people.

Diaz even no-showed a fight he was scheduled for because the promoters failed to donate to St. Jude’s Children Hospital, which was part of Diaz’s contract.

He and his brother continue to give back to their hometown of Stockton, pouring a lot of money into community outreach and a Brazilian Jiu-Jitsu gym.

Nate Diaz was simply keeping his head down and fighting early on in his UFC career, but started speaking up and earned a lot more money as a result.

Following a loss to dos Anjos, Diaz said that he looked through the viewership numbers and realized that he was being massively underpaid.

He then began training harder than ever, winning, and demanding more money to help him become one of the highest-paid mixed martial artists.

Nate Diaz came from rather humble beginnings and has become one of the biggest names in UFC history.

He took advantage of the reality television competition that the promotion was putting on, and never looked back as he has earned millions in his career thanks to his marquee matches.

Now toward the end of his career, Diaz still has a few things to prove and some big checks to cash as he works toward getting one more title shot.

What do you think about Nate Diaz’s net worth? Leave a comment below.