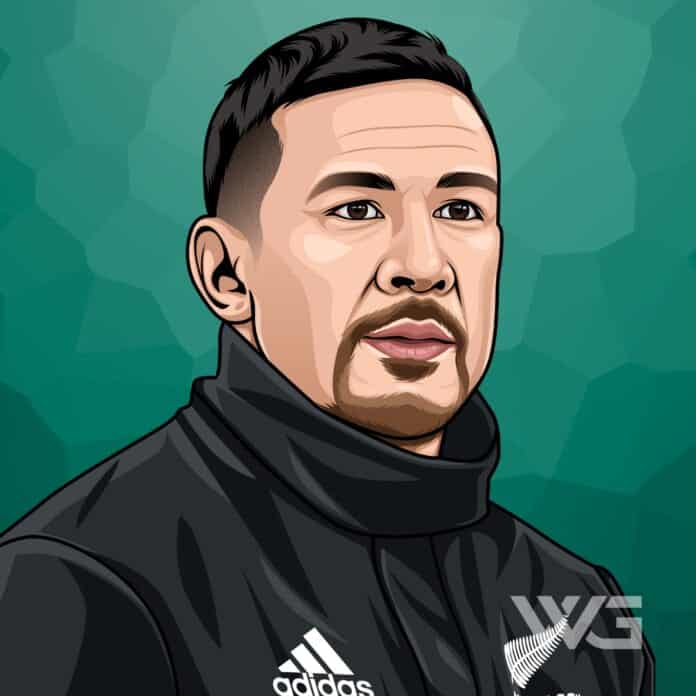 What is Sonny Bill Williams’ net worth?

Sonny Bill Williams is a rugby union footballer and boxer and, besides Karl Donald Ifwersen, he is the only player to have represented New Zealand in both rugby union and rugby league.

Williams, who is already regarded as a legend by many, is one of the few players to have won two rugby union “World Cups.”

As of January 2023, Sonny Bill Williams’ net worth is estimated to be $25 Million.

Sonny’s parents, John and Lee Williams, are a working-class family, who raised him in public housing at Mount Albert.

Williams admitted in a later interview that he began playing rugby professionally in order to help his mother buy a house.

Sonny was skilled at a variety of sports as a child, including Australian rules football (footy) –  he also showed off his great high jump, sprint, and cross-country running abilities.

He was regarded by many as a gifted athlete with a bright future, but at the age of 12, he chose to focus on rugby instead of athletics.

When Williams was competing for the youth squad of Mount Albert-based rugby league club “The Marist Saints,” former player John Ackland saw him.

Sonny was introduced to the “Canterbury Bulldogs” by Ackland, who was a talent scout for the well-known Australian rugby league team.

In 2002, Williams signed a contract with a “National Rugby League” (NRL) club, making him the league’s youngest player ever.

Later, he joined the junior Bulldogs team and worked as a laborer to support himself while he was undergoing training with the squad.

Williams made his National Rugby League debut for the Canterbury Bulldogs in 2004 at Telstra Stadium in Sydney, Australia, when he was 19 years old.

He was chosen by his country’s national team that same year and played for the New Zealand national rugby league squad in the 2004 “ANZAC Test”.

Sonny signed a five-year, more than $2.5 million contract on March 9, 2007, marking the second time he extended his contract with the Bulldogs.

Williams departed Australia in July 2008 to play for the French rugby union team “Toulon” without informing the Canterbury Bulldogs’ administrators.

He joined rugby greats like Paul Caddick and Anthony Mundine who made millions playing in the northern hemisphere club competitions.

Sonny participated in the 2011 Rugby World Cup for New Zealand, helping his team win the World Cup while primarily playing on the right wing.

He participated in the 2012 season of “Super Rugby,” playing with the “Chiefs” and assisted his team in defeating the “Sharks” in the “Super Rugby” final on August 4.

On May 27, 2009, Williams made his professional boxing debut, beating Garry Gurr in the second round of his debut match.

Williams was deemed the victor after ten rounds because the judges had scored the fight in his favor.

Sonny wished to walk in the shoes of other great heavy-weight boxers like Mike Tyson, Lennox Lewis, Larry Holmes, and Deontay Wilder who made their way to the top.

He defeated Ryan Hogan on June 30, 2010, rather convincingly, and in just two minutes and 35 seconds.

Williams put on several strong performances that ultimately gave him the chance to compete against Clarence Tillman III for the vacant “NZPBA” Heavyweight Championship title.

Williams won by technical knockout in the opening round (TKO), which set him up for his next fight against Francois Botha.

Williams returned to the ring too soon, fighting American Chauncy Welliver, at Allphones Arena in Sydney.

He won by a points decision from the referees and was roundly praised by the fight reporters and his opponent.

Here’s a breakdown of Sonny Bill Williams’ annual net worth:

His boxing titles were taken away when he said in October 2013 that he wouldn’t fight for the following three years.

It came as no surprise that Sonny won the Nickelodeon Australian Kids’ Choice Award “Fave Rising Star” in 2005.

While playing for Toulon in France in 2009, Williams embraced Islam and has given numerous interviews about his religion and is the first Muslim to play for the All Blacks.

He joins Zlatan Ibrahimovic, Hakeem Olajuwon, Yaya Touré, and Arian Foster as one of the world’s great Muslim athletes.

Williams made an Umrah journey to Mecca in 2018 and also visited Medina and holds citizenship in both Samoa and New Zealand.

He expressed his “tearful condolences” for the Christchurch-mosque shooting victims in 2019 and criticized China’s treatment of Uyghurs, saying: “It’s a sad day when we put economic interests over humanity.

Williams has four children with Alana Raffie, whom he married after they first met in a store.

Williams competed in his third professional boxing contest against Australian Scott Lewis in January 2011, at the Gold Coast Convention Centre.

He is the only player to represent New Zealand in rugby union after initially representing the nation in rugby league and was inducted into the RugbyPass Hall of Fame in 2021.

Here are a few of the most significant events in Sonny Bill Williams’ career:

After an entertaining fight, Williams defeated Lewis in six rounds via unanimous decision, scoring a TKO.

In Williams’ fight against Tillman, the referee ended up stopping the fight as Williams battered his opponent on his way to the Heavyweight Championship title.

How Does Sonny Bill Williams Spend His Money?

While Williams focuses on his boxing and rugby training and has little time for the trappings of wealth.

He drove a second-hand Daihatsu Charade while at the Bulldogs but has since swapped it for a $400,000 Bentley.

Sonny likes to drive some of the most expensive cars in the world but material possessions are not that important to him.

He is a devout Muslim who has spent a considerable amount of his money and time establishing a mosque in Sydney.

Williams is the first player in rugby league history to secure an endorsement contract with Adidas in 2014.

Additionally, he represents the Just Jeans clothing line and is a brand ambassador for BMW as well as sponsorship agreements with Rebel Sport and Powerade.

Williams visited Lebanon alongside Mike McRoberts in December 2015 while acting as a UNICEF ambassador to draw attention to the situation of Syrian refugee children.

Sonny Bill Williams has excelled in rugby union despite his many accomplishments in rugby league, winning the ITM Cup, Ranfurly Shield, and the Super Rugby trophy.

In SportsPro magazine’s list of the 50 most marketable sportsmen for 2014, he came in at number 41.

Here are some of the best highlights of Sonny Bill Williams’ career:

Williams won his following fight against the Tongan, Alipate Liava’a, with the bout being scored a unanimous points decision with 60–54 in Sonny’s favor by each of the judges.

On November 5, 2022, at Ken Rosewall Arena in Sydney, Australia, Williams was defeated by Mark Hunt in the fourth round in an eight-round heavyweight fight.

Williams’ boxing background is a significant aspect of his fame, as is his selection for the All Blacks, a huge honor for any New Zealand rugby union player.

Here are our favorite quotes from Sonny Bill Williams:

Sonny Bill Williams resigned from international rugby after his appearance at the 2019 World Cup and is now focussing on his boxing and club rugby.

Sonny has never been one to sit back and let others do the work and this has meant that he climbed the ladder in three different sports.

Not only has he represented his country on the rugby field at the highest level, but he’s a heavyweight boxing champion as well.

Right from when he was first starting out as a top-level rugby player, Sonny was more concerned about getting enough money together to buy his mother a house.

Now he tries to be the best he can be – the best father, the best husband, and the best provider for his family.

Williams has a natural athletic ability that has served him well, but without the drive to succeed, his talent would have been wasted.

He has excelled on the sports field and in the ring due to his unrelenting passion to be the best at whatever he puts his mind to.

Sonny Bill Williams started as a rugby league player and later changed to rugby union as the opportunities opened up for him.

He may not always have made the best decisions, but his stature within the rugby world is impressive, while his abilities in the boxing ring are earning him accolades as well.

As of January 2023, Sonny Bill Williams’ net worth is estimated to be $25 Million.

What do you think about Sonny Bill Williams’ net worth? Leave a comment below.