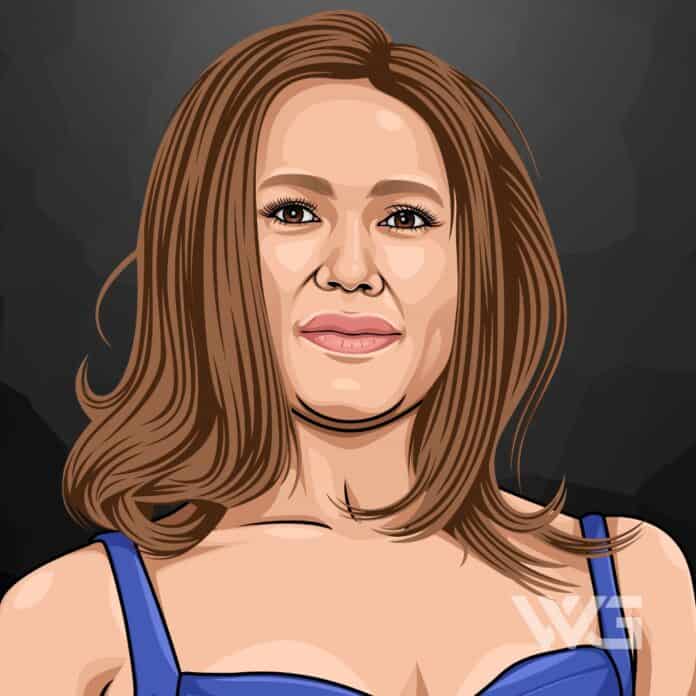 What is Slavica Ecclestone’s net worth?

Radi was discovered by Bernie Ecclestone, the CEO of Formula One, in 1982 during an Armani promotional event – he immediately fell madly in love with her and proposed marriage.

As of February 2023, Slavica Ecclestone’s net worth is estimated to be $1.2 Billion.

Jovi Radic and Ljubica Malic, her parents, originated from Serbian-populated villages in Bosnia-Herzegovina.

Just before Slavica was born, the family relocated to Croatia (then Yugoslavia) in search of better employment prospects.

That didn’t work out, and the family soon returned to the hamlet of Maglajani in northern Bosnia, and when she was seven, her parents got divorced.

Slavica was well-known in the modeling world before she caught people’s attention and rose to fame as Bernie Ecclestone’s wife and love interest.

She came from a low-income family and was raised solely by her mother.

Slavica stood out because of her towering stature, self-assured demeanor, and sparkling smile.

She rose to prominence as the face of several famous brands and walked the catwalk for top fashion companies and designers.

Radi did incredibly well and large companies wanted to work with her as she gave their designer clothes a fresh edge on the catwalk, which increased demand for the brands.

Slavica is 6’1 and Bernie is 5’2 ½ and the language barrier (she spoke Serbo-Croatian and Italian – he only spoke English), and the 28-year age gap made little difference to Bernie.

In 1985, the couple was married, and being Bernie’s second wife didn’t seem to bother her at all.

But, after 23 years of marriage, Slavica and Bernie were not getting along and she filed for divorce in November 2008.

2009 saw the divorce’s finalization, with the couple dividing the Formula One riches, and their divorce garnered massive international attention.

In the end, Slavica received a $1.2 billion divorce settlement as payment for her marriage, and it is among the most expensive divorces ever.

Given the organization of his wealth, the peculiar structure of his divorce settlement is not all that surprising. When Ecclestone had severe cardiac issues in the late 1990s, his assets were transferred into Slavica’s name.

Slavica Ecclestone may have risen to fame, notoriety, and significance following her marriage to Bernie Ecclestone, the head of Formula One, and subsequent divorce, but there is more to her than just her marital status.

Slavica Ecclestone’s annual income is estimated to be more than $100 million based on her divorce settlement and the magnitude of the trusts that she controls.

Although Ecclestone has a net worth in the billions, his ex-wife officially controls the deeds and pink slips on a number of his assets.

Thus, making it appear to the courts that she is the wealthier party and is therefore obligated to pay her billionaire ex-husband $100 million per year.

Her occupation as a model not only provided a new doorway for her but also propelled her into the spotlight and helped her establish herself as a superstar in her own right.

Radi quickly rose to the status of a star model after stepping onto the ramp and she began representing well-known companies and renowned fashion firms.

Here’s a breakdown of Slavica Ecclestone’s annual net worth:

She quickly climbed the ranks and began working as a global fashion model before being hired for the event that would change her life.

She attended the Monza Grand Prix as a model for Armani and caught the eye of Ecclestone, who was immediately smitten.

Tamara is a socialite, model, and TV personality who is married to Jay Rutland, and the couple have a daughter named Sofia, who was born in 2014.

Petra Ecclestone is also a socialite, a model, and a fashion designer who, in 2011, wed James Stunt.

In February 2013, she gave birth to their daughter Lavinia Stunt and then gave birth to James Robert Fredrick Stunt Jr. and Andrew Kulbir Stunt as twins in April 2015.

However, all was not rosy in their relationship, and in 2017, the couple got a divorce.

Stunt, in a churlish moment, claimed that after marrying “a C-list celebrity’s daughter,” his public image began to decline.

Slavica has become incredibly famous for her great wealth gained from the friendly divorce settlement she and Bernie Ecclestone agreed on.

Here are some of the most notable occasions in Slavica Ecclestone’s career:

Slavica is one of the richest models in the world and joins Paris Hilton, Sofia Vergara, Heidi Klum, and Christie Brinkley in the lineup of well-known celebrities.

She is used to bumping into her modeling friends at the high-end parties and events that she frequents with her daughters,  who are following in her footsteps.

How Does Slavica Ecclestone Spend Her Money?

After she married Ecclestone, Radi’s popularity skyrocketed as she was a sought-after guest because she was Bernie’s wife.

The careers of Radi’s daughters Tamara and Petra are currently under her supervision as she teaches them the finer points on being famous.

There is not very much information on Slavica’s career as a model, but she is reported to have earned huge amounts as the face of a variety of top brands, including Armani.

Here are some of the best highlights of Slavica Ecclestone’s career:

Since Slavica and Bernie were divorced, she has inherited more than $500,000,000 from her trust.

It is a rather strange settlement, whereas, instead of the billionaire paying off his ex, it appears that she is giving him about $100 million annually.

Slavica Ecclestone made the most of her assets and ended up being one of the richest women in the world.

Slavica is a tenacious individual who will stop at nothing to get to where she wants to be.

Having grown up in a very poor family, she used her natural beauty to take the modeling world by storm and earned millions on the catwalk.

Slavica remained on very good terms with her husband and it benefitted her to the extent that he signed over his fortune to her.

By playing her cards close to her chest, she was able to secure her future and that of her children.

Slavica’s family was very poor when she was growing up and she vowed to make sure that she was never in that situation ever again.

By good luck and through her contacts, she was able to catch the eye of a wealthy businessman and she made sure that their family stuck together even after she divorced him.

Before her marriage to Bernie Ecclestone, she was quite well-known, but after their union, Slavica became incredibly wealthy.

She made about $150 million during her modeling career and had incredible tenacity in her struggle to the top.

As of February 2023, Slavica Ecclestone’s net worth is estimated to be $1.2 Billion.

What do you think about Slavica Ecclestone’s net worth? Leave a comment below.