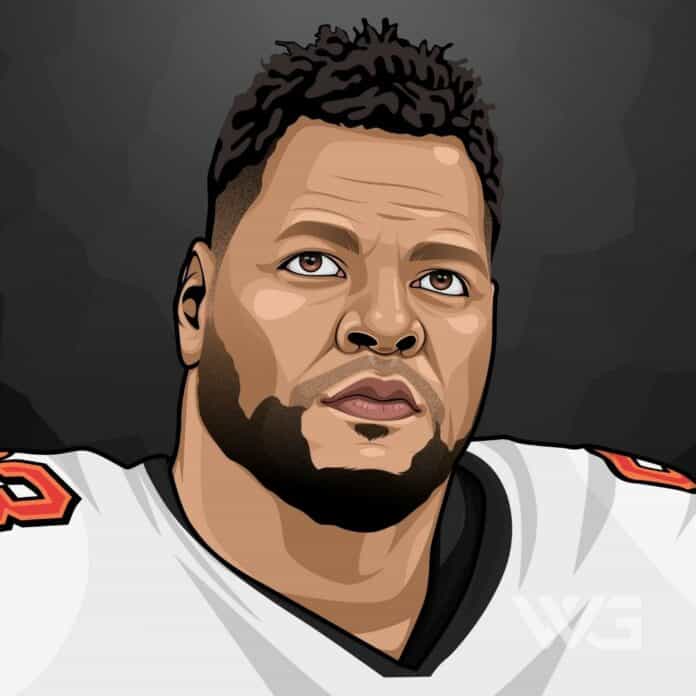 What is Ndamukong Suh’s net worth?

Ndamukong Ngwa Suh is an American defensive tackle and a free agent who has made two Super Bowl appearances.

For his defensive skills on the field, Suh has become one of the most valuable players in the NFL, and he has no plans of retiring anytime soon.

As of January 2023, Ndamukong Suh’s net worth is estimated to be $50 Million.

During his senior year, he made 65 tackles and earned Parade magazine’s high school All-America Honors.

Due to his skills on the field, many colleges and universities attempted to attract him, but ultimately, Ndamukong decided to commit to the University of Nebraska in 2005.

While playing for the Nebraska Cornhuskers, Ndamukong earned Freshman All-Big honors from The Sporting News. As a junior, he also earned First-team All-Big 12 honors, the first lineman to do so since 1999.

By 2010, Suh was considered one of the best prospects available, with ESPN analyst Mel Kiper Jr even describing him as the most dominating defensive tackle in 32 years.

Ndamukong Suh was selected second overall in the 2010 NFL draft by the Detroit Lions, and he became the first defensive lineman to be chosen in the first round since 1995.

Following his first season with the Detroit Lions, Suh faced his first penalty for unnecessary roughness, something he would face numerous more times during his career.

From 2012 to 2014, Suh faced five more fines for roughness, though one was later rescinded.

In 2015, Suh was traded to the Miami Dolphins, where he became the highest-paid defensive player in NFL history, surpassing J.J. Watt, who previously held that title.

However, Suh would play for the Miami Dolphins until 2018, when he was released to free up the team’s salary cap.

Having left the Dolphins, Suh was signed with the Los Angeles Rams, but he only remained with them for a year before moving to the Tampa Bay Buccaneers.

With Tampa Bay, Suh has continued to dominate the field, and during the 2021 season, he appeared in all 17 games, earning 27 tackles and six sacks.

Ndamukong Suh may not yet be one of the richest NFL players in the world, but he is well on his way.

As one of the highest-paid defensive players in football, Suh has enjoyed a lot of big paydays, and we expect him to keep earning millions every year.

However, despite his high earnings, Ndamukong has also faced many fines. His rookie year alone saw him fined $27,500 for on-field behavior, most commonly unnecessary roughness.

In total, Suh has been fined $216,875 for violations within the first four years of his career, including a $100k fine for low blocking John Sullivan, the largest fine ever issued to a player.

Ndamukong Suh married his wife Katya Leick in 2020, though they have known each other since 2009 when they both attended the University of Nebraska.

Together, Ndamukong and Katya have twin sons, Kingston Rudolph Bongjo and Khari David Fombuh, who were born in 2021.

Suh graduated with a Construction Management degree from the University of Nebraska, and after football, he aspires to be a general contractor.

He also has his own official website that highlights his football career, philanthropy efforts, and business holdings.

Ndamukong Suh has earned numerous awards during his career as a defensive tackle in the NFL.

While all of his achievements have been noteworthy, some stand out more than others for their significance.

Here are some of Ndamukong Suh’s greatest career accomplishments and awards:

Ndamukong Suh has accomplished a lot as a member of some of the richest NFL teams, and he is sure to continue earning more awards in the future.

How Does Ndamukong Suh Spend His Money?

This impressive mansion boasts six bedrooms, including a master suite with a master bath and its own velvet lounging couch that sits next to the large soaking tub.

Extremely modern, the mansion is sleek, with huge glass windows throughout that give incredible views of the waterfront and the private infinity pool and spa that is situated alongside the canal.

While not one of the biggest houses in the world, it is certainly impressive, and in 2018 Ndamukong sold it for $7 million before moving to an undisclosed location.

Along with his impressive mansion, Suh is also known for his love of cars, especially ones with a high price tag.

Suh has owned some of the most expensive cars in the world, including a Mercedes S-Class and a 1970 Chevy Chevelle Super Sport.

However, the defensive tackle has admitted that some of his dream cars, like Porsches and Ferraris, are off-limits simply because he’s too large to comfortably fit in them!

Ndamukong Suh has enjoyed many memorable moments over the course of his career that have made him a fan favorite on the field.

However, certain points of his career stand out more than others for their impact on his fame and fortune.

Here are some of the best highlights of Ndamukong Suh’s career:

He may not be as accomplished as his fellow defensive player, Michael Strahan, but Ndamukong has achieved much during his career, and he’s continuing to make a name for himself in the NFL.

Ndamukong Suh gets a negative wrap from some fans due to his aggressive style of play, and while the negativity may get to some people, Suh takes it like a champ.

Not one to let haters get him down, Ndamukong works hard and plays harder, giving 100% whenever he hits the gridiron.

Here are our favorite quotes from Ndamukong Suh:

There is a lot we can learn from this tackling titan and his impressive defensive career in the NFL.

Now that you know all about Ndamukong Suh’s net worth, we can take a look at what he can teach us about reaching our own goals.

Here are some of the best success lessons to learn from Ndamukong Suh:

1. Learn From Mistakes and Move On

Many people get hung up on their mistakes and cannot move past them. This only ends up stifling their growth.

To become successful, you have to learn from your mistakes and then immediately move on from them so that you can give 100% while chasing your goals.

No matter what you do, there are always going to be haters trying to bring you down.

Remember that you can’t please everyone, and unless they have something constructive to offer, ignore them and keep doing your thing.

3. Take Things One Step At A Time

If you try to take on too much at once, you can quickly become overwhelmed and burn out before becoming successful.

Always plan ahead, but take things one step at a time so you can give 100% to the task at hand without putting too much weight on your shoulders.

Ndamukong Suh is one of the most impressive defensive tackles in the NFL, and he has made millions with his skills.

Fortunately, he has no plans to retire anytime soon, so we expect his wealth to keep growing while he enjoys his performance on the field.

If you want to stay informed on everything involving Ndamukong’s fortune and career, make sure to check back often so you won’t miss any updates!

As of January 2023, Ndamukong Suh’s net worth is estimated to be $50 Million.

What do you think about Ndamukong Suh’s net worth? Leave a comment below.

What is Derek Hough's net worth?  Introduction   Derek Hough is an...