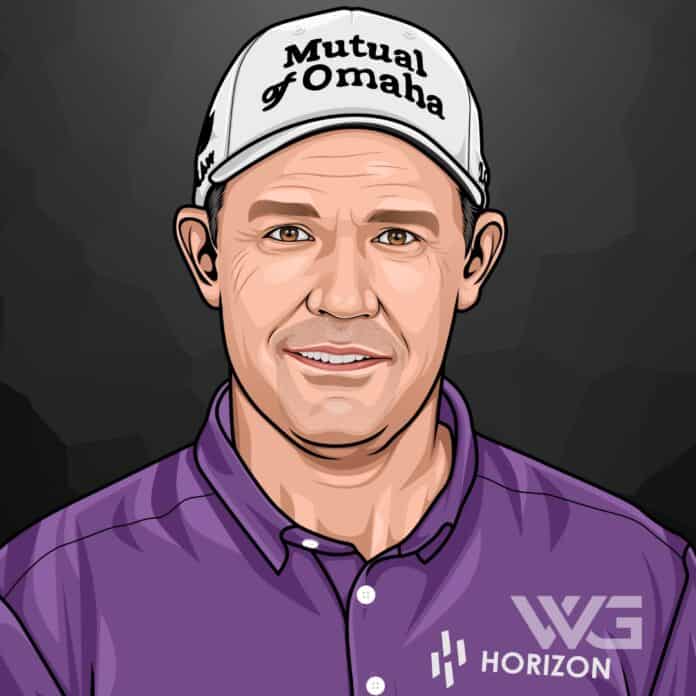 What is Padraig Harrington’s net worth?

Padraig Peter Harrington has won three major championships during his career and earned millions of dollars thanks to his talents.

While this Irish professional golfer has been competing since 1995, he has no plans to retire anytime soon.

As of January 2023, Padraig Harrington’s net worth is estimated to be $40 Million.

As a child, Padraig grew up in Rathfarnham on Dublin’s southside, and he attended Colaiste Eanna Christian Brothers School.

His father and brothers supported his interest in golf from a young age, encouraging him to keep playing and learn more at the Stackstown Gold Club.

Padraig Harrington turned professional in 1995 and won his first title at the Peugeot Spanish Open the next year.

Over the next two decades, Padraig would win 15 tournaments on the European Tour, including The Open Championship twice in 2007 and 2008.

Through the course of his career, Harrington won 35 professional titles, three of which have been majors.

He has also appeared in the Olympics, representing Ireland in 2016, where he tied for 21st place. In 2020, he was named the captain of the Ryder Cup, though the European team ended up losing 19-9.

As of 2022, Padraig has been playing on the PGA Tour Champions, a senior golf tour that features some of the highest-profile golfers in the world.

Padraig has earned enough money to be considered one of the richest golfers in the world, and his net worth continues to grow yearly.

While he isn’t the highest-paid golfer in the game, he has continued to earn some impressive figures from every tournament he participates in.

He may not yet be as wealthy as Phil Mickelson, but Harrington is well on his way if he keeps competing.

Padraig Harrington married his wife Caroline, who he had known since childhood, in 1997, and together they have two sons, Patrick and Ciaran.

In 2010, Harrington became a Global Ambassador for the Special Olympics, and since 2006, he has been a patron of the Irish charity Oesophageal Cancer Fund.

Harrington’s brother, Tadhg, is also involved with golf, owning and teaching at the Harrington Golf Academy.

He can also be found on his official website and his official YouTube channel, which he uses to talk about his career in golf.

Padraig Harrington has won many tournaments and titles during his professional golfing career.

While all of his victories have been substantial, some have been more prestigious and noteworthy than others.

Here are some of Padraig Harrington’s greatest career achievements:

Like David Toms, Padraig Harrington has enjoyed a lot of success during his career, which has helped to make him one of the best currently active golfers.

How Does Padraig Harrington Spend His Money?

Padraig Harrington has lived a life filled with grandeur and luxury thanks to his incredible earnings as a professional golfer.

Currently, Padraig lives in a large home in South Dublin with acres of land for him to practice his swing on.

The large space also provides plenty of room for his large Bernese Mountain dog, Wilson, to round around and play.

Inside the home, Padraig even has his very own mancave where he displays his golf memorabilia and some of the most expensive golf balls in the world until he’s ready to use them.

During his long career, Padraig has reached many milestones which have enabled him to become remarkably wealthy.

While many points in his career have stood out, some have impacted his fame and fortune more than others.

Here are some of the best highlights of Padraig Harrington’s career:

Padraig Harrington may not be as well-known as Tiger Woods outside of the golf world, but as a professional golfer, he has certainly left his mark on the sport.

Padraig Harrington has made a name for himself on the fairway as a dedicated and talented professional golfer.

While his skills speak for themselves, Padraig isn’t afraid to admit his mistakes and how being patient on the green is essential to his play style.

Here are our favorite quotes from Padraig Harrington:

There is a lot that we can learn from Padraig Harrington and his successful professional golfing career.

Now that you know all about Padraig Harrington’s net worth, we can take a closer look at what he can teach us about reaching our own goals.

Here are some of the best success lessons to learn from Padraig Harrington:

Practice is something that you need to do if you want to keep your skills sharp.

No matter what you are doing to become successful, you need to consistently maintain your abilities so that you won’t fall behind the competition.

2. Patience Is A Vital Virtue

Being patient is essential if you want to be successful because lasting success rarely happens overnight.

You may have to wait months or even years to reach your most significant goals, and without patience, you could give up before you ever make tangible progress.

3. Move On From Mistakes

Everyone makes mistakes, even professionals, and it’s important to learn to move on from them so that they don’t hold you back from getting ahead.

Use mistakes as a learning experience so they can help you become better without slowing down your progress.

Padraig Harrington has earned millions as a major championship winner of the PGA Tour.

While he has been competing since 1996, Harrington has no plans of retiring any time soon and will continue competing on the PGA Tour of Champions.

Make sure to check back often so that you won’t miss any updates to Padraig Harrington’s wealth and career!

As of January 2023, Padraig Harrington’s net worth is estimated to be $40 Million.

What do you think about Padraig Harrington’s net worth? Leave a comment below.