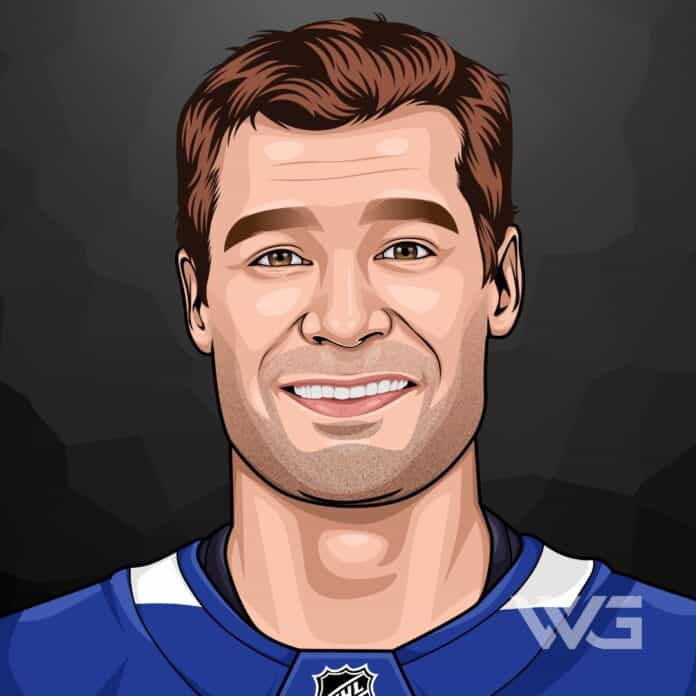 What is Patrick Marleau’s net worth?

Partick Dennis Marleau is a Canadian former hockey forward who currently holds the record for playing the most games in NHL history, 1,779 in total.

He also became the fourth player in history to play 900 games consecutively and only one of five to play in 1,400 games with the same team.

Although he retired from playing in 2022, his career remains one of the longest and most successful in ice hockey history.

As of February 2023, Patrick Marleau’s net worth is estimated to be $46 Million.

He grew up on his family’s farm near Aneroid, and his hockey talents became evident to his parents at a young age.

In 1995, when he was 14, he played at the Canada Game, and as a junior player, he found success as a member of the Seattle Thunderbirds.

During the 1996 season, Marleau was named captain of the Thunderbirds, and he soon led his team to their first Western Conference Championship.

Patrick Marleau started his professional ice hockey career with the San Jose Sharks after being chosen as their second overall pick in the 1997 NHL Entry Draft.

Despite being the youngest player in the draft, he quickly made a name for himself on the team, and by mid-2003, he was named captain of the Sharks.

Marleau notched a hat-trick against the Edmonton Oilers in 2009 and, in the same year, played his 900th career game.

Later, in 2011, he played his 1,000th career game and became the third-quickest player in the NHL to achieve that milestone.

In March 2016, Marleau became the youngest player to perform in 1,400 games, and the following year he scored his 500th goal, becoming the 45th player to do so.

Marleau was traded to the Toronto Maple Leafs in 2017, and he stayed with them until 2019, playing his 1,500th game during that period.

He also scored his 100th game-winning goal and his 1,100th career point while with the Maple Leafs.

From 2019 to 2021, Marleau returned to the San Jose Sharks, and in 2020 he broke the all-time NHL record for regular games played.

Partick Marleau may not be one of the richest hockey players in the world, but he has certainly earned an impressive net worth during his career.

Having spent so long in the NHL, it comes as no surprise that he’s been on the receiving end of some fairly large contract deals and payouts.

While he may not currently be as wealthy as Pavel Bure, Marleau has earned a remarkable amount of money as a professional ice hockey player.

Patrick Marleau married Christina Alvernaz in 2004, and together they have four sons.

Unfortunately, Marleau has kept much of his personal life private from his fans, so not much is known about his life outside of the NHL.

While he doesn’t have any social media, his official NHL page will keep you updated on any news involving him.

Like Wayne Gretzky, Patrick Marleau has received many awards and honors during his lengthy NHL career.

While he has accomplished a lot overall, some of his distinctions have been more prestigious than others.

Here are some of Patrick Marleau’s highest career honors and achievements:

Although these are just some of his most significant awards and accomplishments, they are the ones that stand out the most.

He may not be the most decorated player in NHL history, but he has certainly earned many memorable accolades.

How Does Patrick Marleau Spend His Money?

Patrick Marleau gave fans a glimpse at his lavish lifestyle when he put his Toronto mansion up for sale in 2020 with an asking price of $11.8 million.

The home boasts heated floors, eight fireplaces, and a huge 13-car garage where some of the most expensive cars in the world can be securely stored.

Outside there is also a pool for relaxing in the summer and an ice rink where Marleau could practice during the winter.

While there is no word on where he has moved since selling this mansion, we expect that it is just as impressive, if not more so.

Patrick Marleau’s career has been one of the longest in the NHL, and during his time on the ice, he reached many important milestones.

However, some moments in his career stand out over others for their impact on his fame, fortune, and legacy.

Here are some of the best highlights of Patrick Marleau’s career:

While his entire career has been filled with success, these are the moments that helped him cement his lasting legacy.

It is likely that had he continued playing for more seasons, we would have seen him reach even more impressive milestones on the ice.

Patrick Marleau stood out as one of the most dedicated players in the NHL during his career, and he was constantly pushing himself and his team to do their best on the ice.

Although he played for decades, he never lost his hunger for victory or his determination to constantly improve his skills.

Here are our favorite quotes from Patrick Marleau:

There is a lot we can learn from Patrick Marleau and his long career in the NHL as an ice hockey forward.

Now that you know all about Patrick Marleau’s net worth, we can take a look at what he can teach us about reaching our own goals.

Here are some of the best success lessons to learn from Patrick Marleau:

1. Learn From Mistakes And Move On

No matter what industry you’re in, you’re going to make mistakes at one point or another, but it is vital that you don’t let them hold you back.

If you spend too much time dwelling on what went wrong in the past, you will never be able to make significant progress in the future.

Many people think that if they try hard, they will be guaranteed to get positive results, and then disappointment weighs them down, but that doesn’t happen.

While trying hard is essential if you want to become successful, keep in mind that victory in your endeavors isn’t a given, though that should never stop you from giving 100%.

3. Rely On Your Team

No one can do everything on their own, and being able to rely on a team or support network can be incredibly helpful while you continue to strive for success.

Surround yourself with dedicated and talented people when you can so that you can have people to turn to whenever you need help with something you can’t tackle yourself.

Patrick Marleau has left a lasting legacy on the ice and set numerous records that still stand today.

While he has since retired from playing professionally, there is always a chance that he will return to the NHL in another capacity.

Make sure to check back frequently so that you don’t miss any updates impacting Marleau’s wealth and career.

As of February 2023, Patrick Marleau’s net worth is estimated to be $46 Million.

What do you think about Patrick Marleau’s net worth? Leave a comment below.