Peyton Manning, now 40 years old, was a professional American football player. He played as a star quarterback in the NFL for 18 seasons.

He is considered to have been one of the best quarterbacks of all time, originally playing for the Indianapolis Colts, and finishing the last four season of his career playing for the Denver Broncos.

Check out our collection of the most motivational Peyton Manning quotes:

1. “I have to leave the games now if the announcer says something I don’t agree with. I’m thinking, ‘Peyton, it is not healthy to be all worked up before a game.'” – Peyton Manning

2. “Anyone who waits for someone else to make a change automatically becomes a follower.” – Peyton Manning

3. “Everybody is going to be excited to play in a Super Bowl. When you still enjoy the preparation and the work part of it, I think you ought to be still doing that. I think as soon as I stop enjoying it, if I can’t produce, if I can’t help a team, that’s when I will stop playing.” – Peyton Manning

4. “I have to leave the games now if the announcer says something I don’t agree with. I’m thinking, ‘Peyton, it is not healthy to be all worked up before a game.’” – Peyton Manning

6. “I’m not 23 anymore. But the defensive ends and linebackers chasing me are. If I had to chose between youth and experience, I’d take experience every time.” – Peyton Manning

7. “I’m very humbled and I’m very honored. I certainly think about how grateful I am for all the teammates and coached that I’ve played with and played for throughout my career.” – Peyton Manning

8. “I’ve never left the field saying, ‘I could’ve done more to get ready,’ and that gives me peace of mind.” – Peyton Manning

9. “Imitation is obviously a great form of flattery.” – Peyton Manning

10. “It’s not wanting to win that makes you a winner; it’s refusing to fail.” – Peyton Manning

11. “My dad was a class person on and off the field. That’s the person I want to be.” – Peyton Manning 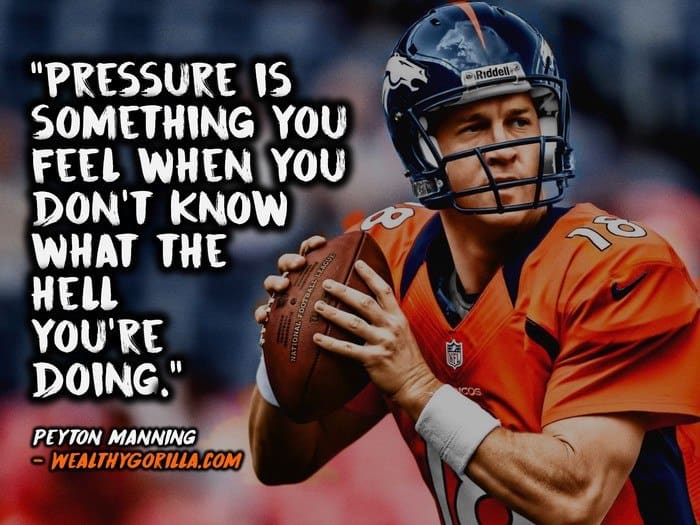 12. “Pressure is something you feel when you don’t know what the hell you’re doing.” – Peyton Manning

14. “When you go through a significant injury and have a major career change, you truly do go one year at a time, and you don’t look past what’s going on now, because you are not sure what’s going to happen. Tomorrow is not promised.” – Peyton Manning

15. “You’ve got to remember what your priorities are. When you’re playing, what you do on the field is the most important thing.“ – Peyton Manning

16. “My high-school coach Tony Reginelli was kind of famous for ‘Reggie-isms,’ kind of like ‘Yogi-isms.’ He always said if you want to be a good quarterback, when sprinting left you want to be amphibious and throw left-handed. I told him, ‘You mean ambidextrous, coach?'” – Peyton Manning

17. “Being there every week for my teammates is really important to me. It’s all about accountability. I hear stuff about the ‘toughest quarterback in the league’ and all that; what’s that mean?” – Peyton Manning

19. “I pray every night, sometimes long prayers about a lot of things and a lot of people, but I don’t talk about it or brag about it because that’s between God and me, and I’m no better than anybody else in God’s sight.” – Peyton Manning

21. “I’m proud to be Archie’s son. Being a quarterback, I had my mentor and hero living in the same house.” – Peyton Manning

22. “I’ve been a Colt for almost all of my adult life, but I guess in life, and in sports, we all know nothing lasts forever. Times change, circumstances change, and that’s the reality of playing in the NFL.” – Peyton Manning

“If nothing else in life, I want to be true to the things I believe in, and quite simply, to what I’m all about. I know I’d better, because it seems whenever I take a false step or two I feel the consequences.” – Peyton Manning

24. “It goes without saying, winning against a good team in a hostile crowd on the road, it’s just an absolutely huge win.” – Peyton Manning

25. “Life is about choices. You ask the questions and you listen to the answers. Then you listen to your heart.” – Peyton Manning

26. “My faith doesn’t make me perfect, it makes me forgiven.” – Peyton Manning

27. “Remind your critics when they say you don’t have the expertise or experience to do something that an amateur built the ark and the experts built the titanic.” – Peyton Manning 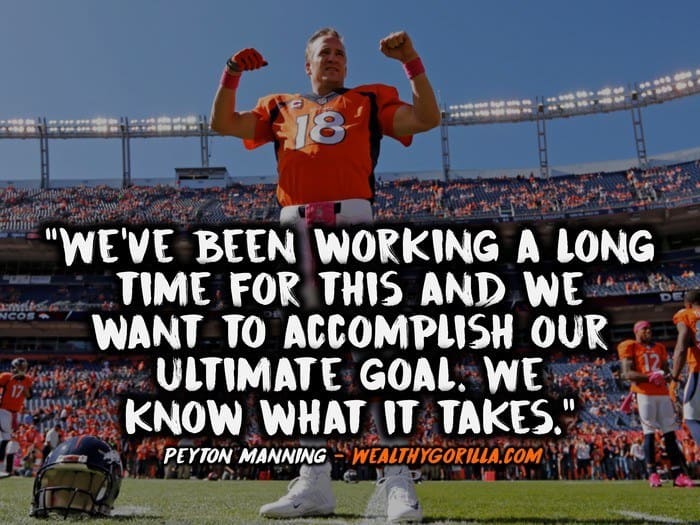 28. “We’ve been working a long time for this and we want to accomplish our ultimate goal. We know what it takes.” – Peyton Manning

29. “When you take a year off from football, you come back for all the enjoyable moments. When you’re not playing, you miss out on all the highs, but you also miss these disappointments. But I would rather be in the arena to be excited or be disappointed than not have a chance at all. That’s football. That’s why everybody plays it.” – Peyton Manning

30. “The head coach tells us what to do, and we follow his orders.” – Peyton Manning

32. “I guess, to tell you the truth, I’ve never had much of a desire to grow facial hair. I think I’ve managed to play quarterback just fine without a mustache.” – Peyton Manning

34. “I would like to think I will be a guy who knows when it’s time to stop. I don’t want to be a guy who hung on and on. I do not have a goal in mind of a year or a statistic.” – Peyton Manning

37. “If you work hard and you play well, all those critics quiet themselves pretty quickly.” – Peyton Manning

“It takes 20 years to build a reputation and 5 minutes to ruin it.” – Peyton Manning

40. “My job is to play well offensively and help my team score points. So I feel very responsible every time we lose a game.” – Peyton Manning

41. “Some guys leave a place after a long time, and they’re bitter. Not me.” – Peyton Manning

42. “When people are watching you, it makes you think twice about what you do, and the things you say, and the people you hang around with.” – Peyton Manning

43. “You hear about how many fourth quarter comebacks that a guy has and I think it means a guy screwed up in the first three quarters.” – Peyton Manning

Check out our other NFL quotes on Tom Brady and Marshawn Lynch!

Which are your favourite Peyton Manning quotes? Leave a comment below.