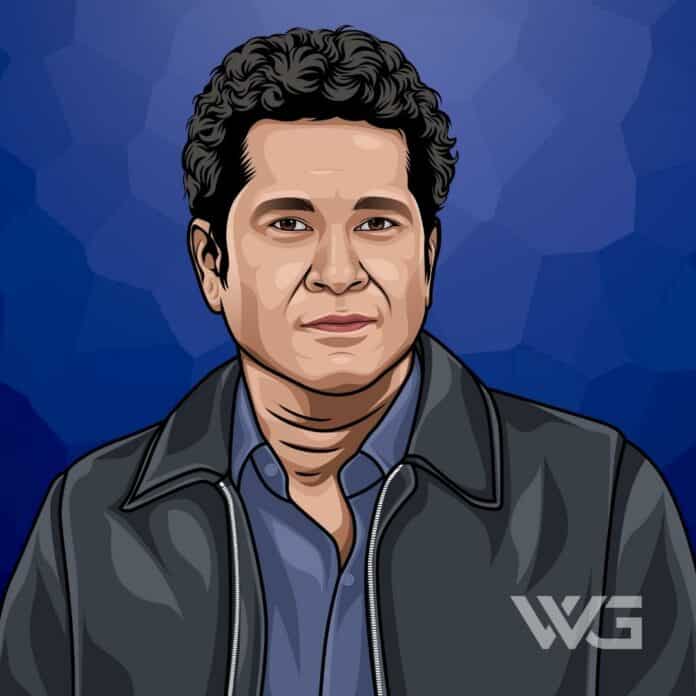 What is Sachin Tendulkar’s net worth?

Sachin Tendulkar is a former Indian cricketer known for serving as captain of the Indian national team and is one of the greatest cricketers of all time.

Sometimes referred to as the “God of Cricket,” his post-cricket life has seen further success as a businessman and entrepreneur.

As of November 2022, Sachin Tendulkar’s net worth is estimated to be $200 Million.

Sachin Ramesh Tendulkar was born 24 April, 1973, in Bombay, India, to a Brahmin Maharashtrian family, including his novelist and poet father, Ramesh Tendulkar, and mother, Rajni.

As a young boy, he had a keen interest in tennis and was a fan of one of the richest tennis players in the world, John McEnroe.

He developed a reputation as a child prodigy while at school, playing cricket and representing John Bright Cricket Club in Bombay’s premier club cricket tournament, the Kanga Cricket League.

After serving as a ball boy at the 1987 Cricket World Cup, he became a professional cricketer in India at the age of fourteen.

Sachin Tendulkar’s career began on the domestic stage representing Bombay in the Ranji Trophy, with the young star quickly establishing himself as one of the best players in the game.

In 1992, he represented Yorkshire for a brief period of time, becoming the first overseas-born player to do so,

On the international stage, Sachin Tendulkar’s rapid rise through the ranks saw him becoming the lead scorer in the 1996 World Cup, taking over as captain the same year.

With a reputation on the same level as iconic players such as Virat Kohli, he continued to play for the national team in the early 2000s, competing at the 2003 Cricket World Cup.

His performances on the pitch throughout the 2000s and into the early 2010s led to his 100th international century in 2012 while playing against Bangladesh in the Asia Cup.

Following his retirement in 2012, his entrepreneurial activities saw him competing with some of the most expensive restaurants in the world, opening two world-class venues in Mumbai.

As one of India’s most iconic and celebrated cricketers, Sachin Tendulkar has enjoyed high levels of income over the course of his career.

His many business ventures since his retirement have seen his income continue to climb in recent years.

With his savvy business acumen and lucrative deals still generating income, his salary is unlikely to diminish any time soon.

Sachin Tendulkar’s net worth has seen ongoing growth since he began his professional career as a cricketer, notably at the peak of his performance and ability.

Additional business deals, including his sports management deal with WorldTel in 1995, have helped him accumulate vast wealth over the years.

As one of the richest athletes in the world, Sachin Tendulkar’s net worth will undoubtedly continue to outshine many of his peers.

Tendulkar married Anjali Mehta, a pediatrician of Gujarati origin, in 1995, having initially met her in 1990.

A devout Hindu and devotee of Ganesha, Tendulkar follows the spiritual teachings of the guru Sathya Sai Baba of Puttaparthi.

He has a hugely popular official Instagram account, keeping over 36 million followers up to date on his latest media appearances.

Sachin Tendulkar’s career has seen him pick up many nominations and awards as one of the most celebrated cricketers in the sport’s history.

His honors include many lifetime achievement awards that reflect his impressive impact on Indian cricket over the years.

Here are some of the high-profile awards and honors from Sachin Tendulkar’s career:

With his legacy as a world-class cricketer secured, we can expect Sachin Tendulkar to continue to gain the recognition he deserves in the future.

How Does Sachin Tendulkar Spend His Money?

With his status as a household name in his home country, Sachin Tendulkar is known for associating with some of the richest people in India and has a lifestyle to match.

He resides in a palatial abode in Mumbai featuring state-of-the-art amenities with room for up to 50 cars in its basement garage.

This extensive collection includes some of the most expensive cars in the world, such as a Ferrari 460, a 1900 Daimler, and several high-end BMWs.

Sachin Tendulkar is one of the most successful Indian cricketers in the game’s history, with a list of high points and successes to match this status.

He has helped his local and national teams win many victories, setting new records in the game and leaving a lasting legacy on cricket.

Here are some of the best highlights of Sachin Tendulkar’s career:

His post-cricketing career has seen Sachin Tendulkar continue to enjoy huge success as a businessman, with many more highlights likely to come.

Sachin Tendulkar has been interviewed on hundreds of occasions throughout his career and has been enthusiastic about his passion for cricket.

He’s also happy to share his insights into balancing his personal and professional life and the importance of family and tradition.

Here are our favorite quotes from Sachin Tendulkar:

Now that you know all about Sachin Tendulkar’s net worth let’s explore in more detail how his professional experiences can help us improve our own lives.

Here are some of the best success lessons to learn from Sachin Tendulkar:

1. If You Want Success You Need Discipline

One of the key reasons Sachin Tendulkar has enjoyed such success as a professional cricketer is his commitment to discipline.

To become the very best you can be, you must dedicate your life to constant practice and focus.

2. Aim To Achieve The Impossible

Many of the records Sachin Tendulkar has broken throughout his career were once thought impossible to achieve.

Set your sights on the highest possible goals, and you have a greater chance of achieving them.

Humility is an important quality everyone should strive for, particularly if they find themselves achieving great success.

Always avoid arrogant displays, and never forget those who have helped you succeed in life.

That concludes this complete guide covering the professional cricketing career, business ventures, and net worth of Sachin Tendulkar.

Since his retirement from cricket, he has been active as a businessman, with many investments and businesses continuing to increase his net worth.

To make sure this article reflects the most up-to-date information on his life and net worth, we’ll be updating it in the future, so be sure to check back again.

As of November 2022, Sachin Tendulkar’s net worth is estimated to be $200 Million.

What do you think about Sachin Tendulkar’s net worth? Leave a comment below.