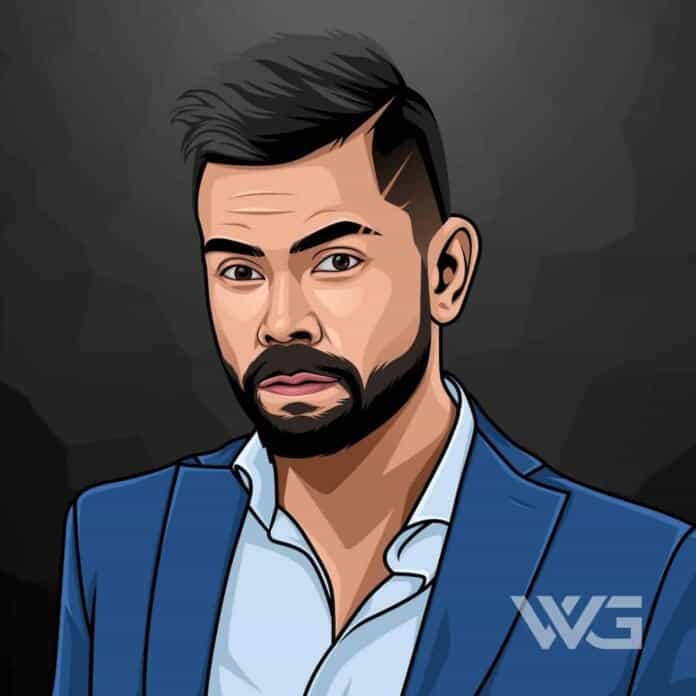 What is Virat Kohli’s net worth?

Virat Kohli is an Indian cricketer who currently captains the India national team. A right-handed top-order batsman, Kohli is regarded as one of the best batsmen in the world.

Virat Kohli was born on the 5th of November, 1988, in Delhi, India. Kohli is the son of Prem Kohli and Saroj Kohli. His father was a criminal lawyer while his mother is a housewife.

Kohli became interested in cricket when he was a little boy. Aged just three, he would pick up a cricket bat and ask his father to bowl to him. He received his early schooling from Vishal Bharti Public School.

He repeated his fabulous performance the next season too and helped Delhi lift the 2004-05 Vijay Merchant Trophy. His consistent performances earned him a place in the India Under-19 squad on its tour of England in 2006.

In 2008, he led the Indian team to victory at the 2008 ICC Under-19 Cricket World Cup held in Malaysia. Following this, he was bought by the Indian Premier League franchise, Royal Challengers Bangalore, for $30,000 on a youth contract.

Kohli was appointed the vice-captain for the 2012 Asia Cup in Bangladesh. In the final group stage match against Pakistan, he scored 183 whilst chasing—the highest individual score against Pakistan in ODIs—and broke West Indies’ Brian Lara’s long-standing record of 156.

His career saw a temporary slump in 2015 when he was unable to make any big scores. However, he soon regained his form and became the fastest batsman in the world to make 1,000 runs in T20I cricket during South Africa’s tour of India later the same year.

Here are some of the best highlights of Virat Kohli’s career:

“A fit body gives you confidence. And there’s nothing more impressive than a great attitude, which you can wear on your sleeve. But you’ll have to remember the difference between being rude and being confident.” – Virat Kohli

“Whatever you want to do, do with full passion and work hard towards it. Don’t look anywhere else. There will be a few distractions, but if you can be true to yourself, you will be successful for sure.” – Virat Kohli

“I love tattoos. And mine symbolizes who I am. I have a Samurai on my left arm. At a subconscious level, I connect to this warrior and model myself on his discipline, skills, and honor. There is also a tribal tattoo and a Chinese symbol of faith. I have seen a lot of people getting tattoos just because it’s a trend.” – Virat Kohli

Now that you know all about Virat Kohli’s net worth, and how he achieved success; let’s take a look at some of the lessons we can learn from him:

Success was never easy and never will be and whoever desires to be successful, should be willing to pay a price. It all depends upon how badly you want it and the price that you pay is called self-discipline or work ethic.

Passion these days seems to be like a fancy word and if you genuinely want to understand what passion is, there are very few sportspersons in the world today as passionate as Virat Kohli.

To come out to bat despite knowing about his father’s death and scoring a match-saving 90 for his state team Delhi against Karnataka in Ranji Trophy, thereby delaying his father’s funeral, speaks volumes not only about his passion towards the game but also about his unconquerable level of dedication and determination.

To achieve those things we haven’t achieved, we must first do those things that we haven’t done. And while we try to maneuver our ways through these uncharted territories, we may come across situations where we will need to wage a lone battle.

How much is Virat Kohli worth?

Virat Kohli’s net worth is estimated to be $70 Million.

How old is Virat Kohli?

How tall is Virat Kohli?

Virat Kohli is an Indian international cricketer, counted amongst the top sportsmen in India.

Considered to be among the best batsmen in the present era, he also doubles up as an occasional right-arm medium pace bowler. He is known for his dependable and powerful batting style and has single-handedly won several matches for India.

As of December 2022, Virat Kohli’s net worth is approximately $70 Million.

What do you think about Virat Kohli’s net worth? Leave a comment below.

What is Kaya Scodelario's net worth? Introduction  Kaya Rose Scodelario is...