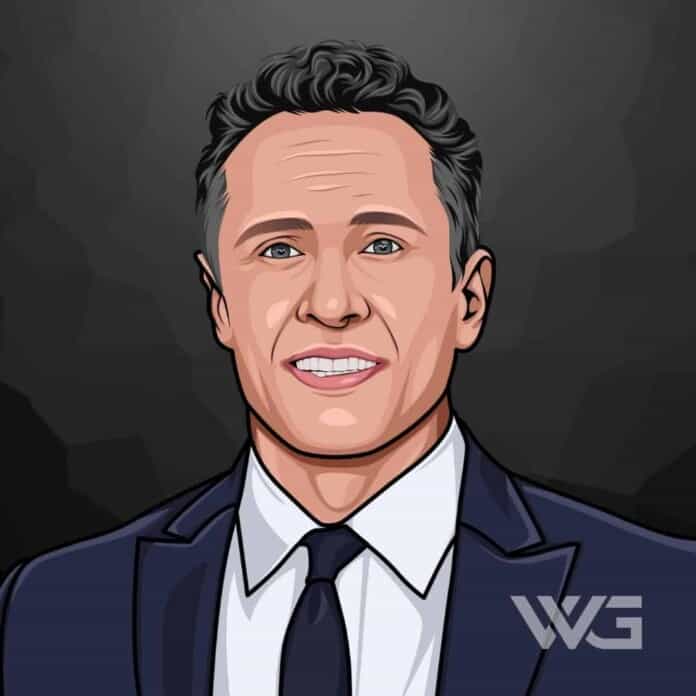 What is Chris Cuomo’s net worth?

Cuomo is best known for being the presenter of ‘Cuomo Prime Time,’ a weeknight news show on CNN. He is the brother of New York Governor Andrew Cuomo.

He has previously been the ABC News chief law and justice correspondent and the co-anchor for ABC’s ’20/20′.

As of December 2022, Chris Cuomo’s net worth is estimated to be roughly $12 Million.

Christopher Charles Cuomo was born on eh 9th of August, 1970, in New York. Cuomo is the son of Italian parents Matilda and Mario Cuomo. When he was 12 years old, his father became the governor of New York. The family lived in the Governor’s Mansion in Albany.

Cuomo grew up with his four siblings, and while their father remained busy with his work, their brother Andrew raised Chris. His brother later grew up to be the governor of New York.

After Cuomo graduated, he started his career as a Wall Street lawyer.

In 1997, People magazine declared him one of its “Most Beautiful People”. He went on the quit his career as a lawyer and began working in the world of journalism. The same year he started his journalism career with the CNBC show ‘Equal Time’. He worked as a co-host and later joined Fox Files as a reporter.

He began working on projects of ABC and hosted the feature titled ‘Cuomo’s Americans’. Cuomo served the network as their chief law and justice correspondent.

How Does Chris Cuomo Spend His Money?

Chris Cuomo makes $6 million annually for his roles at CNN. He has worked as a political policy analyst for Fox News, and he has also effected change in numerous industries.

Cuomo and his wife were proud owners of a beautiful home in Southampton, New York, which they listed and sold in 2019 for$2.9 million. In 2011, they purchased a Park Avenue apartment for $2.995 million.

Here are some of the best highlights of Chris Cuomo’s career:

“We in the network world are used to having time constraints and saying only what you have already thought through 150 times because you don’t have that much expansive opportunity.” – Chris Cuomo

“You’re also looking at a global warming solution here in Europe: smaller vehicles, more energy-efficient, many which use diesel fuel which is more efficient. And the price of gas here is $6 a gallon to discourage guzzling. A lot of big ideas and innovations coming out of Europe.” – Chris Cuomo

“I believe that ‘advocacy journalism’ is not an oxymoron. If that means that I’m going to disrupt the cable, partisan fracas of obsession over what this means from left and right, then so be it. I will be disruptive of it.” – Chris Cuomo

“Now too many see the protests as the problem. No, the problem is what forced your fellow citizens to take to the streets: persistent, poisonous inequities and injustice. And please, show me where it says protesters are supposed to be polite and peaceful. Because I can show you that outraged citizens are what made the country what it is and led to any major milestone. To be honest, this is not a tranquil time.” – Chris Cuomo

“I’m basically being perceived as successful in a system that I don’t value. I’m seen as being good at being on TV and advocating for different positions… but I don’t know if I value those things, certainly not as much as I value being able to live my life on my own terms.” – Chris Cuomo

Now that you know all about Chris Cuomo’s net worth and how he achieved success; let’s take a look at one of his best lessons that we can learn from him:

Live each minute of the day and make every moment count. Live to the fullest because our time here is short and we never know what the next day brings.

It’s not easy to create new habits, but it’s important to follow routines and stick to good habits each day. Having routines can help your normal life to focus on positive things and to get things done.

3. Cherish What You Have

It takes patience and knowledge to understand and be grateful. Take one day at a time and always know that what you have in your life right now is a blessing.

How much is Chris Cuomo worth?

Chris Cuomo’s net worth is estimated to be $12 Million.

How old is Chris Cuomo?

How tall is Chris Cuomo?

Chris Cuomo is an American journalist, former lawyer, and anchor best known for his weeknight news show ‘Cuomo Prime Time’. Cuomo was born to Italian parents, and his father was once the governor of New York.

Cuomo earned a bachelor’s degree from Yale. He went on to work as a lawyer. He is known for his strong criticism against Trump, and he has won numerous awards for his news coverage, including multiple Emmy Awards.

As of December 2022, Chris Cuomo’s net worth is estimated to be roughly $12 Million.

What do you think about Chris Cuomo’s net worth? Leave a comment below.