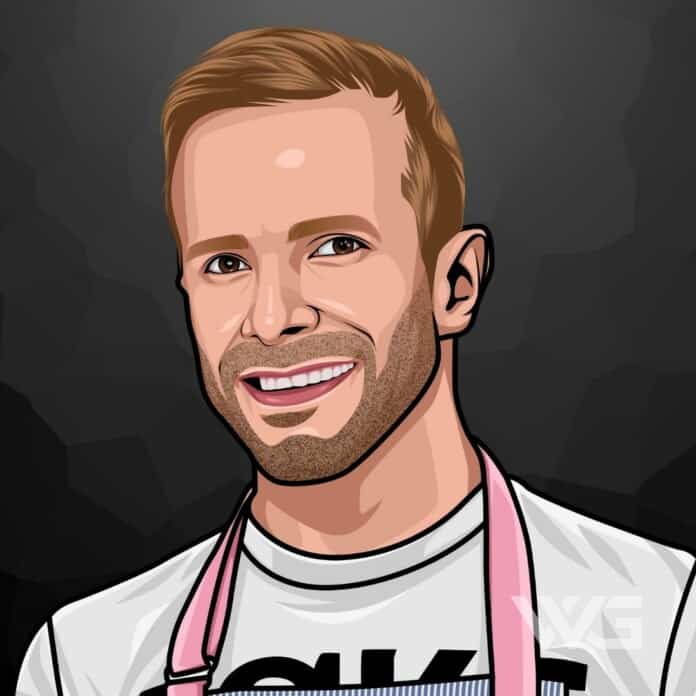 What is Zac Young’s net worth?

Zac Young is an American pastry chef and television personality.

Young has been featured on numerous baking shows on Food Network and the Cooking Channel. He has also appeared as a guest judge on the baking competition show ‘Nailed It”‘ on Netflix, Food Network’s Halloween Baking Championship, and Food Network’s ‘Chopped.’

Young wanted to learn how to bake after his vegan mother never baked cookies. He enrolled at Walnut Hill School for Arts High School in Natick. He worked as a costume designer before he decided that baking was his true passion.

In 2003, he moved to New York to enroll at the Institute of Culinary Education and graduated in 2006. Along with David Burke Fabrick’s pastry chef, they originated the PieCaken dessert while working as an executive pastry chef for the David Burke Group.

In 2015, Young was named one of the “Top Ten” pastry chefs in the United States. He is known for his playful takes on American desserts. After he graduated from the baking and pastry program, he went on to work under Sebastian Rouxel and Richard Capizzi at Thomas Keller’s Bouchon Bakery.

Young joined the David Burke Group in 2012, where he ascended to executive pastry chef. As partner and chairman of the group’s culinary council, he also guides the culinary operations, visions, and inspiration for the new projects.

He is best known for his final four finish in the season of ‘Top Chef: Just Desserts’. He is also known on The Cooking Channel’s long-running show ‘Unique Sweets’. His work was featured in media outlets and publications.

Young was honored when Food and Wine Magazine selected him to sail the high seas as one of Holland America Cruise Line’s “Chef On Board”.

Here are some of the best highlights of Zac Young’s career:

“I was working in the wig department at Radio City Music Hall. I decided that baking cookies would be a fun hobby and found myself becoming obsessed with the balance of creativity and structure involved in baking.” – Zac Young.

“I was actually the first extern at Bouchon Bakery, and I burned down the microwave. Since then, I’ve been the Pastry Chef at Butter and Flex Mussels. I’ve also done development work for a large packaged food company specializing in boxed cake mix and frosting. Now I work for David Burke.” – Zac Young

“How much work we do for the savory side of the kitchen: we make pizzas, potato rye crisps, savory flans, etc. I also help wherever help is needed in the kitchen. If that means plating hors d’oeuvres or expediting the line, so be it.” – Zac Young

“I am. It’s fun. I feel like we have this kind of comradery just going through that experience. You know, it’s like going to college or being in a fraternity. You share this little special thing that not many other people have. It’s true of people from other seasons of Top Chef too, whether it’s regular or desserts or masters.” – Zac Young

“Oh gosh, that’s like picking a favorite child. It’s still donuts. There’s something about donuts that’s like a great blank canvass for anything you want to do whether it’s cake or yeast or fills.” – Zac Young

“It took off. It became a part of the restaurant, basically. We ended up doing 2 pop-up donut shops in Grand Central donuts. That was when I got on Top Chef. Then I started at David Burke Kitchen. Then I moved into the executive pastry chef role of the company.” – Zac Young

Now that you know all about Zac Young’s net worth and how he achieved success; let’s take a look at some of the lessons we can learn from him:

Show up early, leave late. Pay attention: Listen to what your chef tells the other cooks and implement those things in your own work. Don’t complain.

2. Surround Yourself With Motivated People

Celebrating your small wins will help you stay motivated through your journey. Plus, celebrating is always super fun. Maybe you break your goal down to 10 small-sized goals with tasks that get you on track to achieve them.

How much is Zac Young worth?

Zac Young’s net worth is estimated to be $4 Million.

How old is Zac Young?

How tall is Zac Young?

Zac Young is an American pastry chef who has appeared on several cooking shows.

Young co-founded the PieCaken dessert while he worked as an executive pastry chef for the David Burke Group. He first appeared on the reality television series ‘Top Chef: Just Desserts.’ From 2011 to 2017, he appeared as a pastry chef on the TV series ‘Unique Sweets.’

What do you think about Zac Young’s net worth? Leave a comment below.

What is Chris Hemsworth's net worth? Introduction  As of ,...