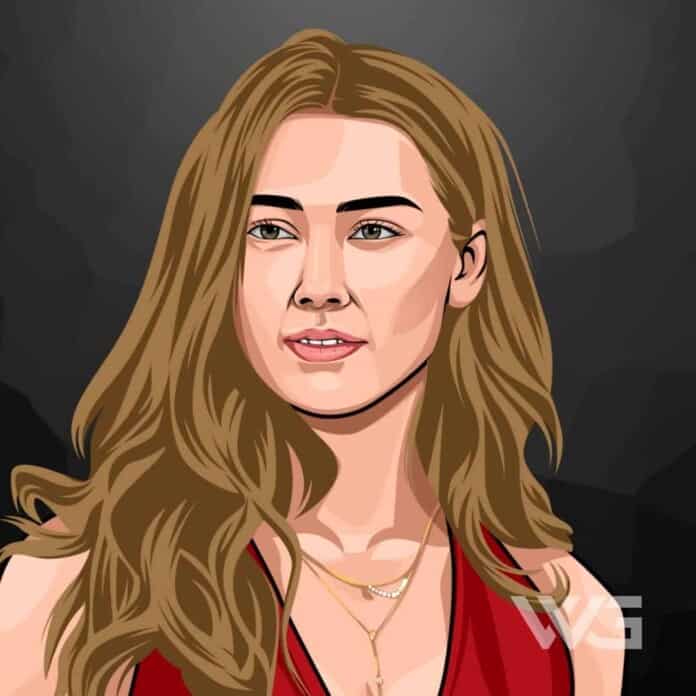 What is Amber Heard’s net worth?

Amber Heard is an American actress and model from Texas.

Heard made her film debut in a minor supporting role in the sports drama ‘Friday Night Lights’, followed by a series of other small roles in television and film.

Amber Laura Heard was born on the 22nd of April, 1986, in Austin, Texas. Heard is the daughter of Patricia Paige, an internet researcher, and David Heard, a contractor.

When she was younger, Amber Heard participated in a number of beauty pageants.

Her best friend died in a car accident when she was 16, which affected her deeply. She was disenchanted with religion and veered toward atheism as she was heavily influenced by Ayn Rand’s ideas around this time. Not so long after, at 17, Amber Heard dropped out of the catholic high school she attended and moved to New York to pursue a modeling career. Later, she moved again – this time, she moved to Los Angeles to pursue an acting career.

Heard’s initial appearances were in two music videos, Kenny Chesnet’s ‘There Goes My Life’ and Eisley’s ‘I Wasn’t Prepared’. She had a brief appearance in a number of primetime dramas, including ‘Jack & Bobby’, ‘The Mountain’, and ‘The O.C.’.

In the next couple of years, she appeared in minor roles in various films such as ‘Drop Dead Sexy’, ‘Price to Pay’, ‘You Are Here’, and ‘Alpha Dog’, as well as TV shows, such as ‘Hidden Palms’, ‘Criminal Minds’ or ‘Californication’ – although the first one wasn’t really successful and got canceled after just a few episodes.

At the beginning of her career, Amber also starred in a number of independent films, like ‘And Soon the Darkness’ or ‘The River Why’.

In 2008, her career started to take off. After a number of unsuccessful projects, like the above-mentioned ‘Hidden Palms’ or the movie ‘Remember the Daze’, Amber Heard appeared in ‘Pineapple Express’, in which she had a starring role alongside James Franco and Seth Rogen, as well as in ‘Never Back Down’, in which she shared the screen with Sean Faris and Cam Gigandet.

In 2009, she was cast as the female lead opposite Johnny Depp in ‘The Rum Diary’. The movie was released in 2011, and, unfortunately, wasn’t very successful, as it has received mixed reviews. Later in the year, she starred in ‘Drive Angry’ alongside Nicolas Cage.

After a brief interlude, Heard’s 2013 releases included the thriller ‘Paranoia’, the action-comedy ‘Machete Kills’, and the satire ‘Syrup’. Her solo film for 2014 was ‘3 Days to Kill’, which was a commercial success. 2015 marked a turning point in her career as she had four releases in the year, including ‘The Adderall Diaries’ in which she, once again, starred alongside James Franco.

In 2017, she made probably the most significant step in her career by joining the DC Extended Universe as Mera in the movie ‘Justice League’. She went on to play the character in ‘Aquaman’ (2018), ‘Zack Snyder’s Justice League’ (2021) and ‘Aquaman”s upcoming sequel – ‘Aquaman and the Lost Kingdom’, set to premiere in 2023. All of the movies were either produced or distributed by Warners Bros. Pictures, originally founded as Warner Features Company by the Warner brothers.

Perhaps the most talked about event in Amber Heard’s personal life was her marriage to Johnny Depp. The couple met during the filming of the movie ‘The Rum Diary’, got engaged in 2014, and got married in 2015.

In 2016, five months later, Amber Heard filed for a divorce. They reached a divorce settlement in August 2016, with Heard receiving $7 million. She pledged to donate the money to the Children’s Hospital Los Angeles and American Civil Liberties Union (ACLU).

Amber Heard has one daughter – Oonagh Paige Heard. She was born on April 8, 2021, through a surrogate. The identity of the father hasn’t been made public as of now. She is very private about this part of her life, only posting photos in which her daughter’s face is not visible.

Here are some of the best highlights of Amber Heard’s career:

“I’m not the kind of person to just sit back and lose something I worked hard on, so, naturally, I’ve taken steps to be further involved in a process when most actors aren’t.” – Amber Heard

“One of the biggest challenges in my job is letting go of the movie once you go home at night, and knowing you can’t do anything to your performance once you’ve laid it on film.” – Amber Heard

“You know, I’ve kind of been lucky enough to always work with established actors or big names or people that are really popular or infamous for doing what they do and doing it well, I guess.” – Amber Heard

“My very best friend died in a car accident when I was 16 years old. That was the hardest blow emotionally that I have ever had to endure. Suddenly, you realize tomorrow might not come. Now I live by the motto, ‘Today is what I have.’” – Amber Heard

Now that you know all about Amber Heard’s net worth, and how she achieved success; let’s take a look at some of the lessons we can learn from her:

No matter how far away from yourself you may have strayed, there is always a path back. You already know who you are and how to fulfil your destiny. And your ruby slippers are ready to carry you home.

Failing should be mandatory in life, but life is so wonderful that failing is, in fact, mandatory in life! Failure makes our heart beat faster and sheds light on our reasoning; it makes us feel alive, and puts us to the test.

Never miss an opportunity to see the bigger picture.

Amber Heard – Net Worth Over the Years

How much is Amber Heard worth?

Amber Heard’s net worth is estimated to be -$6 Million.

How old is Amber Heard?

How tall is Amber Heard?

Why is Amber Heard net worth negative?

Amber Heard’s net worth is negative as a result of the defamation lawsuit her ex-husband, Johnny Depp, filed against her because of the essay Heard published in the Washington Post in 2018, in which she labeled herself as “a public figure representing domestic violence”.

Johnny Depp initially sued Heard for $50 million in damages. In the end, Depp was awarded $15 million ($10 million in compensatory damages and $5 million in punitive damages, although those were reduced to $350,000).

Amber Heard was awarded $2 million in the same trial, which brought the total Amber Heard owned Johnny Depp to $8 million. Before the trial, Amber Heard’s net worth was about $2 million.

Amber Heard is an American actress from Texas who has starred in various movies in different and unconventional roles. Her breakthrough arrived when she was recognized as a supporting actress in several box-office successes, including ‘The Pineapple Express’ and ‘Never Back Down’.

What do you think about Amber Heard’s net worth? Leave a comment below.