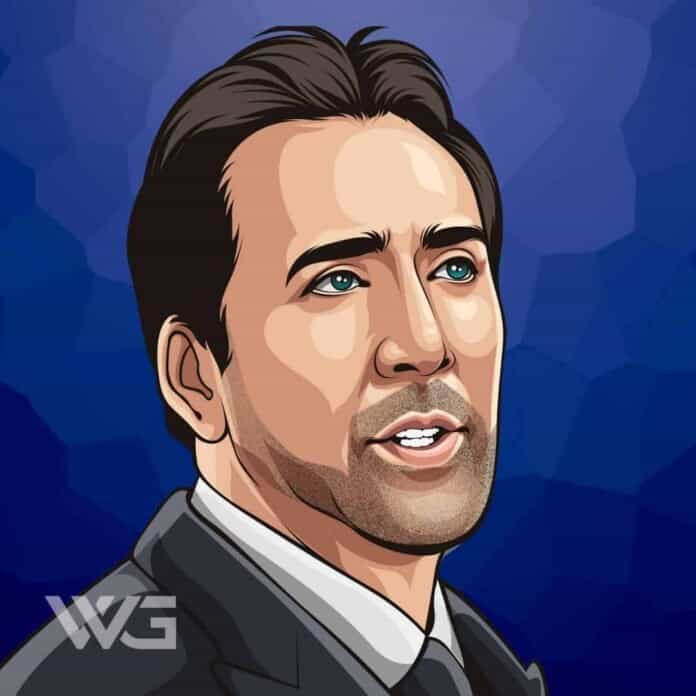 What is Nicholas Cage’s net worth?

As of November 2022, Nicolas Cage’s net worth is estimated to be roughly $25 Million.

Nicolas Kim Coppola was born on the 7th of January, to August Floyd Coppola and Joy Vogelsang. He is of Italian-German-Polish descent and was raised as a staunch Catholic.

The famous director, Francis Ford Coppola is his uncle and he is the cousin of Sofia Coppola, Roman Coppola, and Gian-Carlo Coppola.

Cage studied at Beverly Hills High School but was never really interested in academics because he wanted to act from a very young age. He dropped out of school and joined UCLA School of Theater, Film, and Television.

Nicolas Cage made his film debut with the coming-of-age movie, ‘Fast Times at Ridgemont High’, in 1982.

Cage appeared in his next film, ‘Valley Girl’, which released the following year. A few years later, he played the role of ‘Peter Leow’ in the movie ‘Vampire Kiss’; for which he agreed to eat a live cockroach for his role.

He starred in his biggest box-office hit ‘national Treasure’ which also starred Harvey Keitel and Jon Voight. The following year, he starred in films such as ‘Lord of War’ and ‘The Weather Man’.

In 2006, he starred in ‘Too Tough to Die’ and ‘World Trade Center’. The following year proved to be an extremely fruitful year for the actor with a series of successfully releases including: ‘Ghost Rider’, ‘The Dresden Files’ and its sequel, and ‘National Treasure: Book of Secrets’.

The year 2010 was a magical year for Cage as he starred in a historical film, ‘Season of Witch’ and also appeared as the sorcerer, ‘Balthazar’.

From 2011 to 2013 Cage starred in numerous films including, ‘Trespass’, ‘Seeking Justice’, ‘Ghost Rider: Spirit of Vengeance’ and the animated film, ‘The Croods’.

Here are some of the best highlights of Nicolas Cage’s career:

“One of the things that’s interesting to me is I find things like caffeine and stunts actually relax me. When they’re putting a bit of gel on my arm and lighting me on fire, or when I’m about to go into a high-speed car chase or rev a motorcycle up pretty fast, I find everything else around me slows down.” – Nicolas Cage

“I think what he was trying to say, interesting coming from my blood father, is sometimes there are people in your family that can be toxic.” – Nicolas Cage

Now that you know all about Nicolas Cage’s net worth, and how he achieved success; let’s take a look at some of the life lessons we can learn from him:

Despite being universally panned by critics throughout the 2000s, Nicolas Cage is not a bad actor. He embraces every role offered to him. He’s never too good to turn a movie down, so his filmography has more range than the happy animals Chipotle uses in its burritos.

As a result of taking seemingly any and every role ever, Cage has proven himself to be a quintessential and literal role model for starry-eyed wannabe actors and filmmakers.

Cage’s glorious Play-Doh expressions may the driving force behind his position as reigning Meme Overlord of the Internet.

How much is Nicolas Cage worth?

Nicolas Cage’s net worth is estimated to be $25 Million.

How old is Nicolas Cage?

How tall is Nicolas Cage?

Nicolas Cage is one of the most famous actors in Hollywood, and he is currently one of Hollywood’s most talented actors. He hails from the upright background, where both his mother and father, though separated, were well-respected achievers in their own fields.

As of November 2022, Nicolas Cage’s net worth is estimated to be roughly $25 Million.

What do you think about Nicolas Cage’s net worth? Leave a comment below.