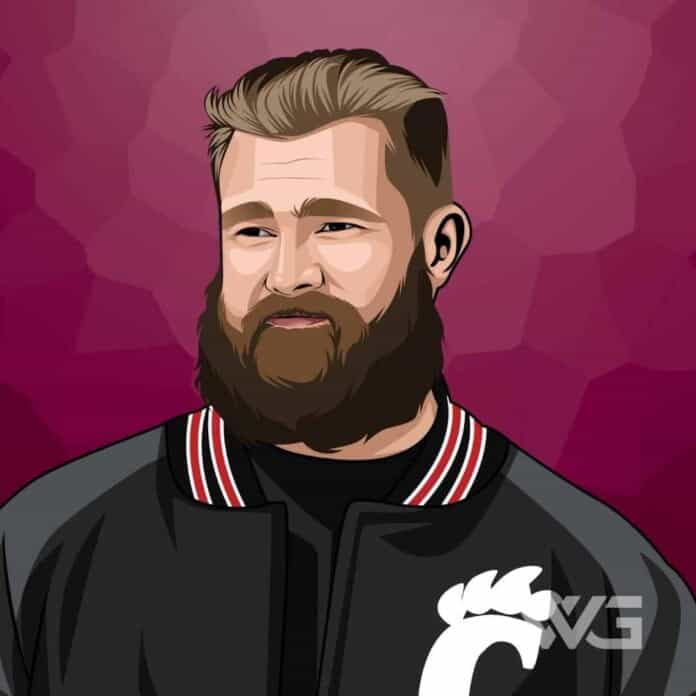 What is Jason Kelce’s net worth?

Jason Kelce is an American football center for the Philadelphia Eagles of the NFL.

Kelce was drafted by the Eagles in the sixth round of the 2011 NFL Draft.

Jason Kelce was born on the 5th of November, 1987, in Cleveland Heights, Ohio. Kelce is the son of Ed, a sales rep in the steel business, and Donna, who works in banking.

He attended Cleveland Heights High School, where he played both running back and linebacker and was twice named All-Lake Erie-Lake League.

Kelce was selected by the Philadelphia Eagles in the sixth round of the 2011 NFL Draft. He was unable to practice or sign a contract until the NFL lockout was lifted on July 25, 2011.

In 2012, Kelce was named the starting center for the second consecutive year. On September 16, he suffered a partially torn MCL and torn ACL in a win over the Baltimore Ravens.

In 2014, he agreed to a six-year, $37.5 Million contract extension, with $13 million guaranteed, according to agent Jason Bernstein.

Kelce started in all 16 games and had his best season as a pro in 2017. He was selected as a First-team All-Pro and was the highest-rated offensive lineman by PFF. He also won Run Blocker of the Year by PFF.

Here are some of the best highlights of Jason Kelce’s career:

“I think as a leader, you just take accountability. That’s what leadership is. Leadership is taking accountability yourself and holding others to the same standard, regardless of what’s going on.” – Jason Kelce

“To be honest, I don’t think that’s any different this week than it was last week. I just think that weak leaders stop doing that, and they start pointing fingers … Strong leaders hold strong, and they remain accountable. They try and lift others up, take things off of other people’s shoulders, but more on theirs. That’s what a good leader is. That’s what I’m all about, and I think that’s what the majority of guys in here are about.” – Jason Kelce

Now that you know all about Jason Kelce’s net worth, and how he achieved success; let’s take a look at some of the lessons we can learn from him:

Action is the foundational key to all success.

Those who say it can’t be done are usually interrupted by others doing it.

How much is Jason Kelce worth?

Jason Kelce’s net worth is estimated to be $37.5 Million.

How old is Jason Kelce?

How tall is Jason Kelce?

Jason Kelce is known as an American professional football player who was drafted in the sixth round of the 2011 NFL draft.

What do you think about Jason Kelce’s net worth? Leave a comment below.