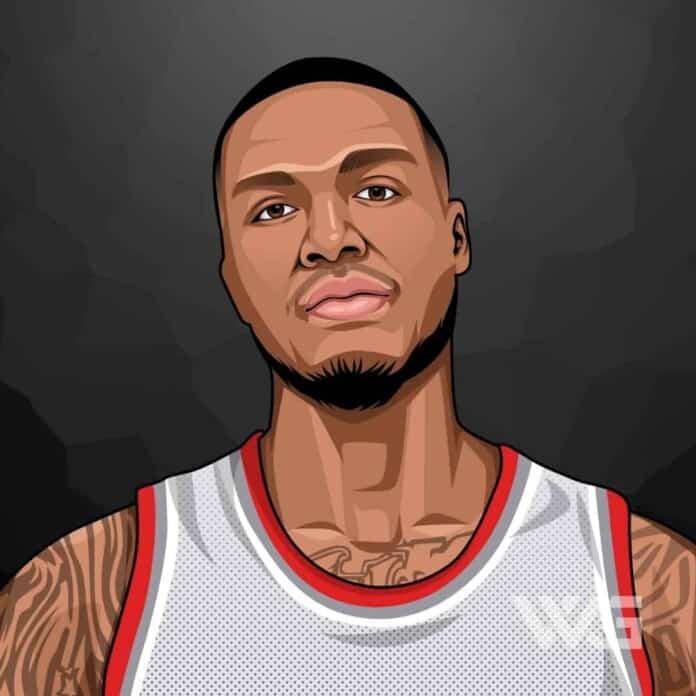 What is Damian Lillard’s net worth?

Lillard plays for the Portland Trail Blazers of the NBA. Lillard played college basketball for the Weber State Wildcats and earned third-team All-American honors in 2012.

After being selected by Portland with the sixth overall pick in the 2012 NBA draft, Lillard has unanimously voted the NBA Rookie of the Year.

As of February 2023, Damian Lillard’s net worth is estimated to be $100 Million.

Damian Lamonte Ollie Lillard was born on the 15th of July 15, 1990, in Oakland, California.

While his brother mostly played football, Lillard was fascinated by skating and basketball as a child. He spent most of his time at the neighborhood skating rink or basketball court.

Lillard started his professional career with the ‘Portland Trail Blazers in 2012. In his ‘NBA’ opening game against the ‘Los Angeles Lakers,’ he became the third ‘NBA’ player to score 20 points and 10 assists in his debut match.

During his second season, he scored a career-high 41 points against the ‘Sacramento Kings,’ with 26 points in the fourth quarter, a new record for the highest number of points scored by any player in a single quarter.

As of February 2023, Damian Lillard’s net worth is estimated to be roughly $100 Million.

How Does Damian Lillard Spend His Money?

Damian Lillard spends some of his money on real estate and charity work.

Here are some of the best highlights of Damian Lillard’s career:

“With Biggie, I thought his flow and his swag was better than Tupac’s, but I thought Tupac’s passion and ability to relate to the average person was better than Biggie, and I thought Nas was kind of like both, with a lot of substance going but a lot of swag.” – Damian Lillard

“I feel like when it comes to rap – like, real rap music – and knowing the pioneers of rap, I feel like there’s no competition for me in the NBA. Other guys can rap, but they’re not as invested or as deep into actual music as I am and always have been. I think that might be what the difference is. I more want to be an artist.” – Damian Lillard

“For me, it’s just amazing that I grew up watching Tim Duncan and KG and Kobe and Paul Pierce, Allen Iverson and all those guys, and now it’s like, ‘Man, I can’t believe they actually got old.’ It’s like they actually walked away. It’s crazy to think about, but the game has to keep moving.” – Damian Lillard

Now that you know all about Damian Lillard’s net worth and how he achieved success; let’s take a look at some of the lessons we can learn from him:

1. Success Will Come For Those Who Never Gives Up

Success is what happens after you have survived all of your disappointments.

Staying positive does not mean that things will turn out okay. Rather it knows that you will be okay no matter how things turn out.

How much is Damian Lillard worth?

Damian Lillard’s net worth is estimated to be $100 Million.

How old is Damian Lillard?

How tall is Damian Lillard?

Damian Lillard is an incredible NBA player who plays for the ‘Portland Trail Blazers.’

During his college days, he led the ‘Weber State Wildcats,’ earning two ‘Big Sky Player of the Year’ awards and becoming the second-highest scorer in ‘Weber State’ history.

He is best known for being one of the fastest players in the history of ‘NBA,’ to have scored 600 three-pointers and a career-high of 51 points in a game.

As of February 2023, Damian Lillard’s net worth is estimated to be roughly $100 Million.

What do you think about Damian Lillard’s net worth? Leave a comment below.

Grand Slam champion Mary Pierce is a highly accomplished former tennis player, and she has earned a significant net worth for her skills.