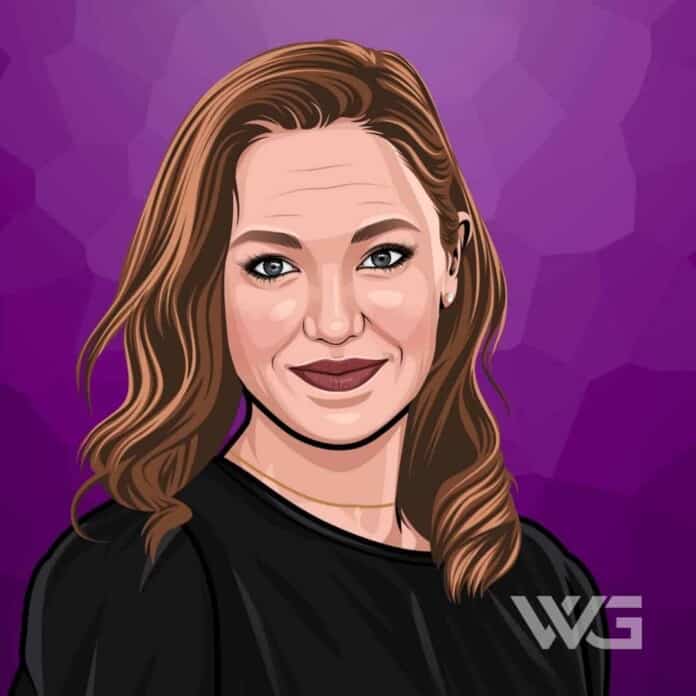 What is Laura Osnes’ net worth?

Laura Osnes is an American actress and singer.

Osnes is known for her work on the Broadway stage. Osnes has played starring roles in ‘Grease,’ ‘South Pacific,’ ‘Anything Goes,’ and ‘Bonnie and Clyde.’

She received a Tony Award nomination for her performance in ‘Bonnie and Clyde.’ Osnes has also starred in the title role of Rodgers & Hammerstein’s ‘Cinderella’ on Broadway, for which she received a Drama Desk Award.

Laura Ann Osnes was born on the 19th of November, 1985, in Burnsville, Minnesota.

Osnes first acting performance was in the second grade, where she played in ‘The Wizard of Oz.’ She attended Eagan High School.

She played the lead part of Sandy in ‘Grease’ at the nation’s largest dinner theatre, the Chanhassen Dinner Theatres. Her run was short when she was chosen to compete in the talent competition ‘Grease: You’re the One that I Want!.’

In 2009, Osnes rook the role of Ensign Nellie Forbush in the Lincoln Center Theater Broadway revival of South Pacific. She stayed with the show until the 4th of October, 2009.

Osnes played Bonnie in ‘Bonnie and Clyde’ in 2011. She was joined by her Asolo Rap castmate Jeremy Jordan as Clyde. The show received negative reviews, had lackluster ticket sales, and closed on December 30, 2011.

Her next performance was at the Kennedy Center Honors in a tribute to Barbara Cook alongside Sutton Foster, Rebecca Luker, Kelli O’Hara, Patti LuPone, Glenn Close, and Audra McDonald.

In 2012, Osnes played the title character in the reworked adaption of the Rodgers and Hammerstein musical, ‘Cinderella.’ She then led the ‘Encores!’.

She voiced a guest spot for the Nickelodeon children’s show ‘Team Umizoomie as ‘Sunny the Sunshine Fairy’.

Osnes starred as Julie Jordan in the Lyric Opera of Chicago’s production of Carousel, alongside Steven Pasquale in 2015. The production closed on the 3rd of May, 2015. The same year, she was the guest artist for the annual Pioneer Day Concert of the Mormon Tabernacle Choir.

How Does Laura Osnes Spend Her Money?

Osnes owns an apartment near Times Square. The home comes with laundry facilities and a doorman.

Here are some of the best highlights of Laura Osnes’ career:

“I’d love to do movies and be on TV. But I think if I transitioned into TV/film completely, I would really miss singing and dancing. It would be ideal to be cast in a movie musical!” – Laura Osnes

“I’m actually so low maintenance when it comes to my hair. It’s naturally stick-straight, but I do like to use a curling iron to give my locks some life.” – Laura Osnes

“I don’t have a gym membership. I usually do a bit of basic yoga or stretches at home or in my dressing room before the show. I’ve done plank for 60 seconds almost every day since 2009, when I had to wear a bikini on stage in ‘South Pacific.'” – Laura Osnes

“Getting to do ‘December Songs’ in a cabaret-style format was so interesting because it’s like a one-woman song cycle that actually tells a story. It feels like a theatrical experience more than a cabaret because I didn’t talk in between. We went from one song to the next, nine songs in a row – bam – I told the story in half an hour.” – Laura Osnes

“‘Grease’ was my Broadway debut. That was eye-opening. At the same time, it was very familiar. It was a Broadway show, but it’s kind of the same as doing a show in Minnesota. It’s the same type of rehearsal process. You are doing 8 shows a week, but I worked at a theatre in Minnesota that did 11 shows a week.” – Laura Osnes

“I found an agent midway through my year-long run at ‘Grease’ and just started to audition. I, fortunately, booked ‘South Pacific’ six months after ‘Grease’ was over, and I feel like that was a huge turning point in legitimizing myself in the Broadway community, and getting to do that was absolutely amazing.” – Laura Osnes

Now that you know all about Laura Osnes’ net worth and how she achieved success; let’s take a look at some of the lessons we can learn from her:

That’s the ideal. Not to get stuck in a rut playing the same role.

3. Be a Good Example

If you can be a good example to other people, why not try to be that person? Osnes have a bit of a people pleaser in her, but not so much so that it’s out of control.

How much is Laura Osnes worth?

Laura Osnes’ net worth is estimated to be $2 Million.

How old is Laura Osnes?

How tall is Laura Osnes?

Laura Osnes is an American actress and singer best known for her work on the Broadway stage.

She starred as Sandy in ‘Grease’ on Broadway from 2007 to 2008. She has received many awards throughout her career, such as Tony Award and a Drama Desk Award.

In 2020, she starred in the series ‘A Killer Party: A Murder Mystery Musical.’ Osnes has appeared in episodes of the TV series ‘Elementary,’ ‘The Marvelous Mrs. Maisel,’ ‘Dynasty,’ and more.

What do you think about Laura Osnes’ net worth? Leave a comment below.