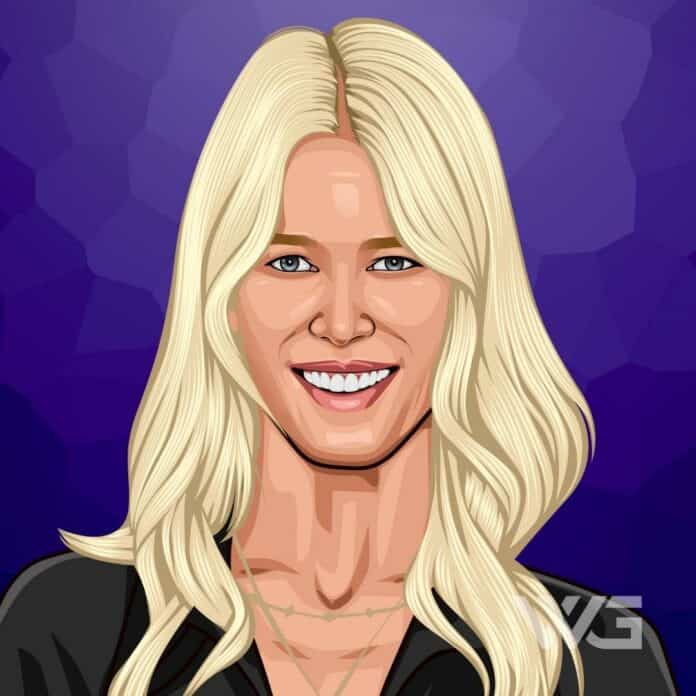 What is Claudia Schiffer Net Worth’s net worth?

Claudia Schiffer is a German model and actress who has appeared on over 1000 magazine covers during her career.

Still active today, Claudia continues to grow her net worth through modeling and acting.

As of February 2023, Claudia Schiffer’s net worth is estimated to be $70 Million.

Schiffer originally aspired to be a lawyer and work at her father’s law firm, but in 1987, when she was 17, she was scouted at a nightclub in Dusseldorf by the head of the Metropolitan Model Agency.

After leaving high school, Schiffer flew to Paris for a trial photo shoot and ended up appearing on the cover of Elle shortly after.

In 1989, Claudia Schiffer started appearing in campaigns for Guess, while also making appearances on the cover of British Vogue.

Schiffer was selected by Karl Lagerfeld to become the new face of Chanel, and she walked in her first fashion show for the designer brand in 1990.

Along with Elle and Vogue, Schiffer also appeared on the covers of Harper’s Bazaar, Cosmopolitan, and Time, as well as People, Vanity Fair, and Rolling Stone.

She has also been featured by numerous brands in ad campaigns, with some of the biggest names, including Liz Claiborne, Marc Jacobs, Giorgio Armani, Versace, Gap, Saks Fifth Avenue, Revlon, and Pepsi.

Along with her modeling and acting, Claudia has also released a series of exercise videos called Claudia Schiffer’s Perfectly Fit, which became best sellers.

She may be just shy of becoming one of the richest models in the world, but Claudia Schiffer has done very well for herself overall.

Although we don’t have data on everything Schiffer has earned over her entire career, we have information on some of her biggest paydays.

If she continues earning as much as she has in the past, Claudia Schiffer may very well become one of the wealthiest models in the industry sometime in the future.

Claudia Schiffer first met David Copperfield in 1993 when he had her brought on stage in a mind reading and flying illusion act.

The pair became engaged in 1994 but split up in 1999, citing conflicting schedules as the cause of the breakup.

In 2002, Schiffer married Matthew Vaughn in Suffolk at Coldham Hall, and together they have three children; Clementine Poppy, Caspar Matthew, and Cosima Violet.

Claudia is active on her official Instagram account, where she posts photos of her modeling and daily life.

She also has her own official website, where she promotes her brand collaborations and projects she’s worked on.

Claudia Schiffer has achieved a lot throughout her career and won many honors and accolades.

Although all of her achievements are noteworthy, some stand out more than others for their importance.

Here are some of Claudia Schiffer’s most significant honors and achievements:

Like Naomi Campbell, Claudia Schiffer has enjoyed a remarkably successful career with many considerable accolades to prove her talents.

How Does Claudia Schiffer Spend Her Money?

Claudia Schiffer and her husband bought Coldham Hall for $5.4 million in 2002, both to host their wedding and to live in.

This Tudor house is located in Stanningfield, Suffolk, England, and was originally built in 1574 by Sir Robert Rookwood.

Its most notable feature is its great hall, a two-story building that has hosted numerous high-profile residents, including Ambrose Rookwood, who was involved in the gunpowder plot against King James I, and David Hart, an advisor to Margaret Thatcher.

Claudia Schiffer has hit many high points during her long career in the modeling industry.

However, some of her milestones have impacted her fame and fortune more than others.

Here are some of the best highlights of Claudia Schiffer’s career:

Claudia Schiffer’s career has been filled with successes, but these are the ones that have stood out the most.

Claudia Schiffer may be known for her beauty, but she is so much more than just a pretty face.

There is a lot Claudia can teach us about life and success, and fortunately, she isn’t afraid to share her insights.

Here are our favorite quotes from Claudia Schiffer:

There is a lot to learn from Claudia Schiffer and her successful career in modeling.

Now that you know all about Claudia Schiffer’s net worth, we can take a closer look at what she can teach us about reaching our own goals.

Here are some of the best success lessons to learn from Claudia Schiffer:

There can be an argument for some investments, but unless you’re well informed about all the pros, cons, and risks, it’s often not worth taking the chance.

A good rule of thumb is to only invest what you’re willing to lose, and if you’re verging on breaking the bank, you had better walk away.

2. It’s Okay To Turn Down An Opportunity

Some opportunities can be life-changing, and it’s often hard to turn them down.

However, not all opportunities have to be taken, especially if you’re not 100% sure about them.

Confidence is something all successful people need, and it is important to develop it if you want to reach your full potential.

If you’re not naturally inclined to be confident, building it up gradually with support and positive reinforcement will only help you in the long run.

Claudia Schiffer has earned an impressive net worth as one of the most successful models in the industry.

Despite not being as active as she used to be, Claudia continues to grow her net worth as a model and actress.

Make sure to check back often, so you don’t miss any changes to Claudia Schiffer’s net worth!

As of February 2023, Claudia Schiffer’s net worth is estimated to be $70 Million.

What do you think about Claudia Schiffer’s net worth? Leave a comment below.