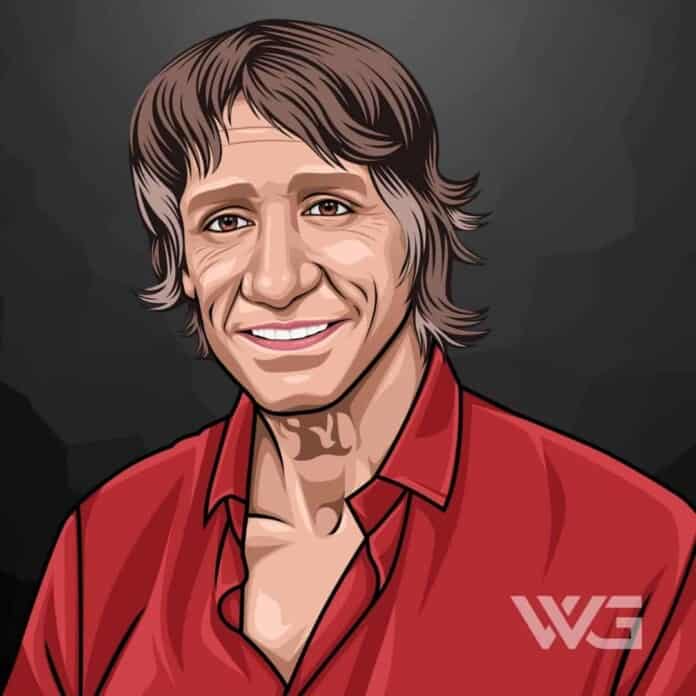 What is Kevin Von Erich’s net worth?

A member of the famous Von Erich wrestling family, Kevin grew up immersed in the sport, and it comes as no surprise that he was able to become so successful.

As of February 2023, Kevin Von Erich’s net worth is estimated to be $10 Million.

Kevin Ross Adkisson was born in 1957 in Belleville, Il, to the famous Von Erich wrestling family.

Despite their actual surname being Adkisson, every member of the family involved in wrestling used the ring name “Von Erich,” after the patriarch of the family, Fritz Von Erich.

Kevin is the second oldest son and the only surviving son of Fritz.

Before starting his wrestling career, Kevin played football at North Texas State University until an injury put an end to his dream of playing in the National Football League.

Kevin started wrestling in 1976, and most of his career was spent wrestling for World Class Championship Wrestling.

In the ring, he enjoyed incredible success as a single and tag team wrestler, often participating in some of the industry’s most high-profile feuds, including ones with Chris Adams and Ric Flair.

By the late 70s, Kevin had established himself in Dallas, enjoying his first major win as a wrestling tag team with his younger brother David, and in 1978, the pair won the NWA Texas Tag Team Championship twice.

Kevin and David developed a feud with the Fabulous Freebirds in the early 1980s, and it is often considered one of the most memorable in wrestling history.

However, the feud ended when David Von Erich died in Japan from acute enteritis, which devastated Kevin.

Between 1989 and 1990, Kevin didn’t compete very much, becoming discouraged due to his father’s choice to sell the WCCW to Jerry Jarrett.

Despite this, Kevin did help a young Steve Austin out in the ring during this time, and Kevin still considers him a friend to this day.

In 1991, Kevin Von Erich joined the World Wrestling Federation, debuting in a dark match where he faced off against Brian Lee.

While he won the North American Heavyweight title by defeating Greg Valentine, a week later, he lost it to John Hawk and started cutting back his performances before formally retiring in 1995.

Although Kevin Von Erich made a lot of money from his wrestling career, there are a few other ways he’s helped maintain his wealth.

While Kevin Von Erich has been tight-lipped about his exact salary, it’s obvious that he still maintains a steady income that allows him to maintain his immense net worth.

Kevin Von Erich has been married to Pam Adkisson since 1980, and together they have four children; two sons, Kevin Marshall and David Michael Ross, and two daughters, Kristen Rain and Jillian Lindsey.

Between his children, Kevin and his wife have 11 grandchildren.

Currently, Kevin lives in Kauai, Hawaii, with his wife.

Coming from the famous Von Erich wrestling family, Kevin has enjoyed a lot of awards and achievements that have helped make him a legend in wrestling history.

Here are some highlights from Kevin Von Erich’s career:

How Does Kevin Von Erich Spend His Money?

Since retiring from the ring, the American retired professional wrestler has kept his life pretty tightly under wraps, only returning to the spotlight briefly.

Because of this, we don’t have much information about how the last surviving son of the Von Erich wrestling family spends his money, though if his Texas ranch is any indication, he is living pretty comfortably.

He may not be living as large as some of the richest wrestlers in the world, but he certainly isn’t struggling to make ends meet.

With such a long career, Kevin Von Erich has enjoyed reaching many important milestones.

Here are some of the best highlights of Kevin Von Erich’s career:

Kevin Von Erich may be best known for his moves in the ring, but he also has said many noteworthy things throughout his career.

Here are our favorite quotes from Kevin Von Erich:

Now that you know all about Kevin Von Erich’s net worth, we can look at the deeper lessons that this retired wrestler can teach us about finding out his own success.

Here are some of the best success lessons to learn from Kevin Von Erich:

Climbing the ladder of success almost always comes with some type of pain, and it is important to learn not to shy away from it but to embrace it as a part of the journey.

However, it is also important to be able to recognize when you need help and find people you can rely on when things become too difficult for you to bear on your own.

If you never take chances, you may miss out on amazing opportunities that could bolster your success.

This doesn’t mean dropping everything and investing your life savings in the best cryptocurrency exchanges, but looking for opportunities that may not have been part of your original plans.

Kevin Von Erich has experienced a lot of loss in his life, and this helps to remind us that we need to embrace what we have while we have it.

Whether that’s finding time to do a favorite hobby or splurging on one of the most expensive pizzas in the world, it’s important to take advantage of the things around us while we have the opportunity.

Kevin Von Erich has carried on the legacy of the Von Erich family and earned a huge net worth while doing so.

While the former wrestler may keep to himself nowadays, he remains one of the most legendary wrestlers in history, with an impressive net worth earned over decades in the ring.

As of February 2023, Kevin Von Erich’s net worth is estimated to be $10 Million.

What do you think about Kevin Von Erich’s net worth? Leave a comment below.