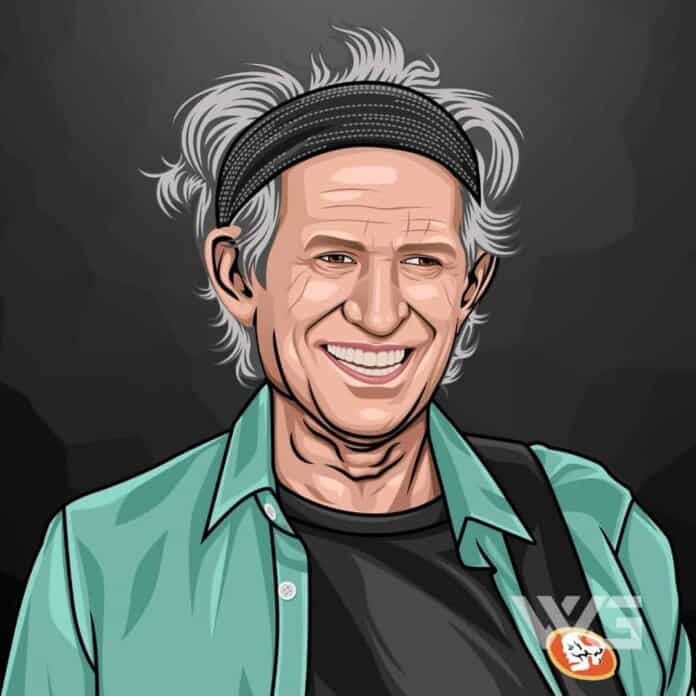 What is Keith Richards’s net worth?

Keith Richards is best known as a founding member of the Rolling Stones, but he is also a singer, songwriter, and record producer.

His skills as a musician have earned him incredible fame and a huge net worth that makes him one of the richest rockstars on the planet.

As of February 2023, Keith Richards’s net worth is estimated to be $500 Million.

Keith Richards was born in 1943 in Dartford, Kent, England, and he is the only child of Doris Maud Lydia Dupree and Herbert William Richards.

As a child, Richards attended Wentworth Primary School alongside future bandmate Mick Jagger, who was also his neighbor.

Between 1955 and 1959, Richards attended Dartford Technical High School for Boys until he was expelled for truancy and transferred to Sidcup Art College.

At Sidcup, he started diverting from his studies to focus on the guitar, eventually teaching himself to play solos created by Chuck Berry.

In 1962, Richards left Sidcup and moved into a flat with Jagger and Brian Jones. The trio started out as a jazz band before morphing into the rock and roll band they are known as today.

As a musician, Richards plays both lead and rhythm guitar parts, sometimes in the same song, along with singing and providing background vocals.

Richards and Mick Jagger started co-writing songs together in 1963 with the assistance of their manager, Andrew Oldham.

The first original top ten song written by Richards and Jagger was “The Last Time” in 1965, followed by (I Can’t Get No) Satisfaction” as their first international number one song.

Since the 1960s, Richards has been an active record producer, and since 1974, Richards and Jagger have co-produced Rolling Stones records and some by other artists using the name “the Glimmer Twins.”

Keith Richards has also released a couple of solo records, the first in 1978 was a Chuck Berry cover, and in 1987 he formed the X-Pensive Winos after being inspired by Jagger’s own solo studio albums.

Throughout his career, Richards has also recorded with numerous other artists, including big names like John Lennon, Yoko Ono, and Eric Clapton.

In the modern day, Richards continues making music, producing records and touring, almost as much as he did during The Rolling Stones’ heyday.

Richards has also appeared in the Pirates of the Caribbean series as Captain Edward Teague, the father of Captain Jack Sparrow.

In 2007, he also released his autobiography titled Life and two years later published a book of quotes called What Would Keith Richards Do?: Daily Affirmations from a Rock ‘n’ Roll Survivor.

While Keith Richards splits money from touring and royalties with the rest of The Rolling Stones, he is still one of the richest rockstars in the world and certainly isn’t going to be hurting for cash anytime soon.

While we don’t have exact data about Keith Richards’s annual salary, we do have some information to help you put into perspective just how much this rockstar makes.

With shows for this legendary band bringing in millions for a single show, coupled with all their additional business revenue, Keith Richards will only continue getting richer as time goes on.

From 1967 to 1979, Richards was involved with Italian actress Anita Pallenberg. Together they have a son Marlon Leon Sundeep and a daughter, Angela.

Their third child, Tara Jo Jo Gunne, died at two months of sudden infant death syndrome while Richards was on tour, something he says has always haunted him.

In 1979, Richards met model Patti Hansen and married a couple of years later, in 1983, on Richards’s 40th birthday.

His official website is also updated with videos, tour dates, and a library of Richards’s music that visitors can stream.

With such a long career, it’s no surprise that Keith Richards has been on the receiving end of many honors and awards.

Here are some highlights from Keith Richards’s career:

How Does Keith Richards Spend His Money?

Rockstars notoriously love living it up, and Keith Richard’s is no different.

Since Keith Richards’ net worth is so large, he can afford the best of the best, particularly when it comes to houses.

While he still owns his Sussex estate, Redlands, which he purchased in 1966, he also owns a home in Connecticut and a private resort island in Parrot Cay.

He also owned a lavish New York penthouse, though the rockstar put it up for sale in 2019 for $12.2 million.

Currently, his main home is a colonial mansion in Weston, Connecticut, and it sits on eight acres with lake and river views.

Richards has set up a huge library in this home, filled with thousands of books he acquired over the years.

Although we don’t know what cars Richards currently owns, in the past, he has driven around in a 1972 Ferrari Dino 246GT, a Ferrari 400i, and a 1965 Bentley Continental Flying Spur.

We really wouldn’t be surprised to learn he had a garage full of the most expensive Ferraris in the world at this point. Maybe hidden away on his private resort island?

Keith Richards has enjoyed a lot of significant milestones that have helped build his impressive net worth.

Here are some of the best highlights of Keith Richards’s career:

As a songwriter, Keith Richards has a way with words, but some of the things he’s said have stood out more than others.

Here are our favorite quotes from Keith Richards:

Now that you know all about Keith Richards’s net worth, we can look at what we can learn from his long-lived career.

Here are some of the best success lessons to learn from Keith Richards:

Many people make the mistake of being afraid to get old, and because of this, they rush to get everything done before they feel they’re over the hill.

However, if you start to think of getting older as becoming more experienced, you can start to focus more on achieving your goals and the present without worrying about what’s around the next turn.

Keith Richards may be a rockstar, but he loves to read.

Although the era of Google has made it easy to find tidbits of info in a second, if you want to learn something in-depth, you will want to read a book.

Whether you’re reading for pleasure or to learn a new skill, knowledge is power, and it will only help you to become more successful!

3. Don’t Worry About Making It Big

When trying to become successful, it is easy to get caught up in making it big as quickly as possible.

However, trying to force anything is a surefire way to make it fail, so it’s best to focus on the goals you know you can realistically attain while letting all the other pieces come together organically.

Keith Richards is a rock and roll legend, and he’s not showing any signs of slowing down!

Since The Rolling Stones are still touring every year and Richards is still making solo music on top of that, we expect that this rockstar’s net worth will only continue to increase.

Make sure to check back regularly to stay up to date!

As of February 2023, Keith Richards’s net worth is estimated to be $500 Million.

What do you think about Keith Richards’s net worth? Leave a comment below.